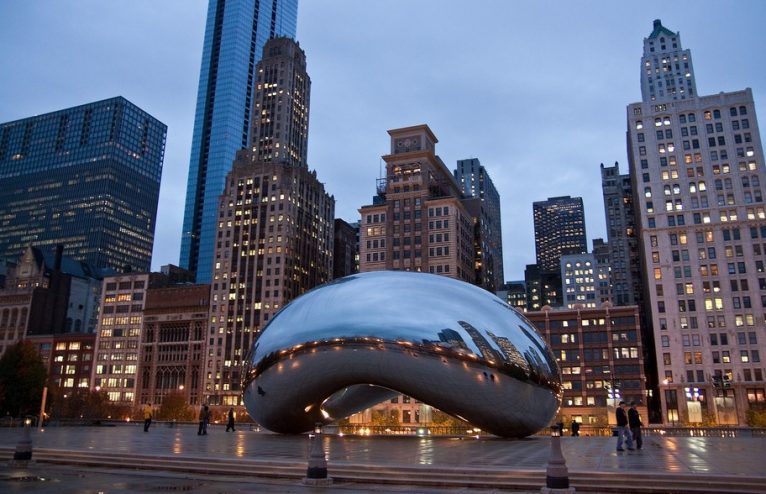 Chicago is known as a city of skyscrapers. Situated on a likely spot of flat land amidst two rivers and a freshwater lake, the site was occupied by Native Americans for centuries before settlers, not from America, realized they were on to a good thing.

They forcibly removed them, and called it ‘westernization’. They fought back bitterly when the tribes understandably took exception to it all. It’s why the city stays close to its Native American name (shikaakwa, literally translated as “wild onion”), but, from a tourists stance, it is also why “The City of Big Shoulders” is best explored feet first.

Unlike so much of America, Chicago has history, and when it comes to stuff like mass slaughter, prohibition and the country’s first comprehensive sewer system there’s a limit to what you can gather 1,400 feet above sea level. Having seen the city in the company of someone with fairly chronic vertigo, I can safely say this is as much a city for those without a head for heights as it is for those well endowed.

Start at Point de Sable, eponymous settlement of Chicago’s first non-native resident, and proceed from there. It’s appropriate, and when you come to crane at the town’s more intimidating buildings, you’ll be reassured to remember there was a time when the only big things round here were a lake, some flat land, and someone’s dreams.

They may not be blessed with the iconic blue buttons that populate London’s buildings, but what Chicago lacks in Blue Plaques it more than compensates with bronze. They are everywhere. Forget the guide book – this is a city obsessed with telling you where you’re standing and what happened there, be it the battle of Fort Dearbourne or the Obama’s first kiss. One interesting recent addition is the Legacy Walk, a whole series of plaques dedicated to the lives and achievements of LGBT pioneers. There’s Harvey Milk (of Milk film fame), who was among the first openly gay elected officials in the U.S, Jane Addams, a Nobel Prize-winning social justice pioneer, Barbara Jordan, the first African-American woman elected to Congress from a Southern state and many others. It’s a welcome, if shaming reminder of ‘history’s’ glaring omissions when it comes to the LGBT community. Yet there are other, less edifying tributes to Chicago’s diverse and imperfectly recorded past.

Different people see different things in the statues that populate Chicago, not least when it comes to the mirror monument in Grant Park. Known to the world as Grant Gate, and my family and I as The Shiny Bean, it basks in the sunshine in the Millennium area like a kitten’s belly, reflecting back grossly distorted versions of anyone who dares to approach. Most do – it’s the lure of the circus mirror, and people are more impressed by its queer beauty than offended by their funny reflections. Yet not every statue in Grant Park is so amusing in its capacity to offend. Over in the Congress Plaza two bronze equestrian statues stand as ‘gatekeepers’, The Bowman and The Spearman. Designed by Sculptor Ivan to ‘commemorate the Native American and symbolize the struggle to settle this country’ they are impressive only if you can overlook the fact that, unlike every statue, plaque and tablet commemorating Chicago’s non-native American inhabitants, these figures are not named. “The world’s people, from what they have so far seen of us on the Midway, will regard us as savages,” remarked a leading Potowami figure of these representations. Nevertheless, they are technically works of genius – and the way Mestrovic forces you to on the tense, intent bodies of the figures in order to imagine the missing weapons is particularly effective. 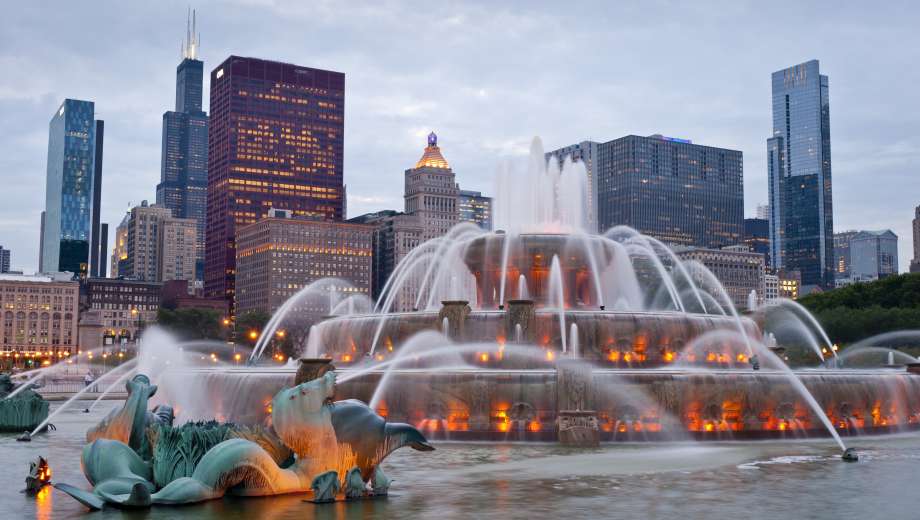 Other features which demand essential viewing before you leave Grant Park are the Buckingham Fountain – an immense, rococo effusion of carved rock and sparkling water, complete with water shows, designed in the fashion of Bassin de Latone at the Versailles Palace by Edward H. Bennett and curiously reminiscent of an enormous wedding cake; and the Agora, the 106 headless and armless iron sculptures to the south of the park, which are equally impressive – if not more so for inspired by something other than classical Europe. Abakanowicz, the architect, claimed that her art draws on her fear of crowds, which she once described as “brainless organisms… worshipping on command and hating on command”. Not everyone who sees them comes away with such a dire impression, but an hour lost wandering around their eerie torsos is an hour well worth losing. Incidentally, we were told too late to visit the The Beverly Cleary Sculpture Garden, a trio of bronze statues representing three beloved characters from eponymous children’s author’s stories. I’d never heard of her, but a Google Image search suggests the effigoes of Henry Huggins, and his dog Ribsy are worth seeing regardless, especially if you’ve young ones of your own in tow.

Yes, this really does warrant its own subtitle, and no, you don’t have to stay in them. Posh Hotel lobbies are an essential part of every city experience, and Chicago has enough to satisfy even the most ardent of champagne lifestyle aspirants – including myself. Swan into any one of these 5 Gold Star plated lobbies and you’ll be welcomed by plush antique furniture, dazzling chandeliers and bouquets of such painstakingly beautiful arrangements, you’ll be tempted to touch them. Resist the urge –nothing says lemonade living quite like checking if the flowers are fake – and relax like you own the place on one of their many velvet sofas instead. The Drake, The Congress Plaza and Palmer House are richly endowed with such seats, some of which have even graced the backsides of such celebrated guests as The Queen, Gandhi and Roosevelt. Plonk down there and you will be, if not walking their footsteps, at least sitting in their seats, Meanwhile at the Hard Rock Hotel on Michegan Avenue, you’ll find the historic Carbide & Carbon Building doing a remarkably good job of hiding music-inspired furnishings, signed musician photos, and a host of classic tracks within its black granite and green terracotta walls – a tribute to Art Deco on the outside, and a tribute to the art of making music within. 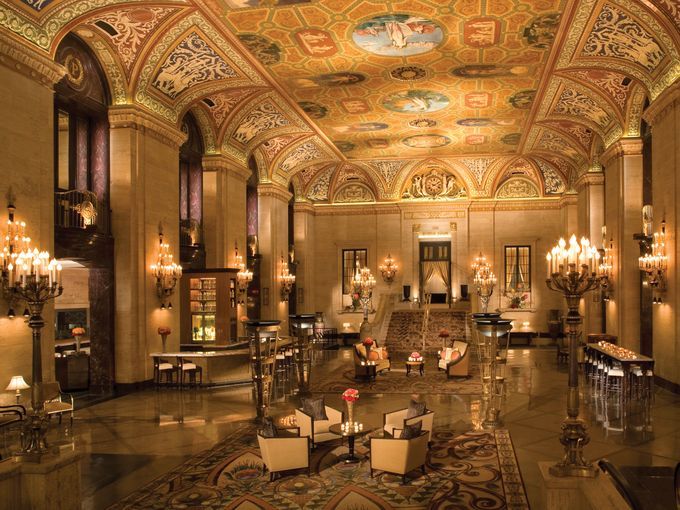 There’s nothing like a boat tour through tall buildings to offer you a bottom’s up view of architecture and Chicago, being endowed with both a sinuous river network and the world’s finest array of skyscrapers, has one of the best. We went with Chicago Line, and were thrilled by both the time-honored expertise of the guide (she’d been doing this 30 years) and by the complementary refreshments of cloudy lemonade, freshly baked cookies and cafetiere coffee provided by the onboard. We heard about the famous sewer system, the fire of 1871 and the Fort Dearbourne massacre but we also learnt the technical stuff: the bascule spans, grillage foundations and other techniques which has made the Chicago School a groundbreaking force in architecture even to this day.

“Come on,” I hear you mutter. “We’re not stupid. We don’t need a journalist to tell us to shop in America”. Well, perhaps not when it comes to the usual suspects – Tiffany’s, Macy’s and so on –but there are some retailers worth visiting which don’t necessarily appear on that list. They are as follows: the Lego store, where an enormous Lego dragon spans a shop of models to rival or even surpass those at Legoland; Fox and Obel, the beautiful, bountiful food market where the average portion size would feed a family of ten. Ten bison; and American Girl, the doll shop of Orwellian extremes. Here, young, privileged girls wheel their pushchairs with abandon,  scouring the shelves for the clothes and accessories that will help her and her plastic offspring to complete the look. Some opt for the baking set; others, the bath tub and shower. Still more find themselves yearning for an outfit that matching that their doll is wearing (they have those too). Whatever it is, they find will find it here in this dolly department store, where the powers of imagination have been supplanted with consumerism to such an extent there’s even an allergy-free lunch set complete with medical bracelet and allergy shot for your doll, ‘just in case’. If you want to see capitalism at its most insidious, it’s worth a visit; if however, you want your faith in the future of humanity to remain intact, I suggest you bypass American Girl and head straight to the Harold Washington Library downtown.

You can tell a lot about a city by the state of its central Library and Chicago is no exception. Designed to incorporate various ancient scholastic symbols – owls, ears of corn, seed pods and so on –  together with elements of nearby historic buildings, the Harold Washington Library is a beautifully post-modern tribute to the city’s cultural and academic pursuits.  Inside its red-brick walls, the atmosphere is sacrosanct. Quotes coined by the great and good of humanity are etched into its marble walls. “A Library implies an act of faith which generations still in darkness hid sign in the night in witness of the dawn,” quoth Victor Hugo – and if the great, content-rich and open-minded public exhibitions we saw here are anything to go by, the act of faith implied by this library was great indeed.

In the 1920s Chicago rested on two rivers: the Chicago, and the potent stream of alcohol running in a network of backrooms alongside it . Needless to say, when it came to the draconian prohibition laws of that era, both continued to flow unchecked. Today, while the idea of alcohol bans are history, the legacy of Chicago’s defiance remains in the quirky bars you find in unlikely – and likely – places around the city. Our favourite was Simon’s Tavern, which started in a grocer store selling coffee with whiskey until it made enough money to open a full-blown speakeasy in the basement (top marks for effort) and is marked only by a the neon sign outside the tavern is a fish holding a martini. But for a speakeasy feel without the hassle, try 1914, a bar that’s easily-found, easily entered, and is replete with twenties décor (there’s even an old fashioned cash register) and retro attire.

There’s more – much more –but I trust this Brit’s-eye view goes some way to demonstrate that Chicago is city that demands you keep your feet on the ground. At least for most of it. 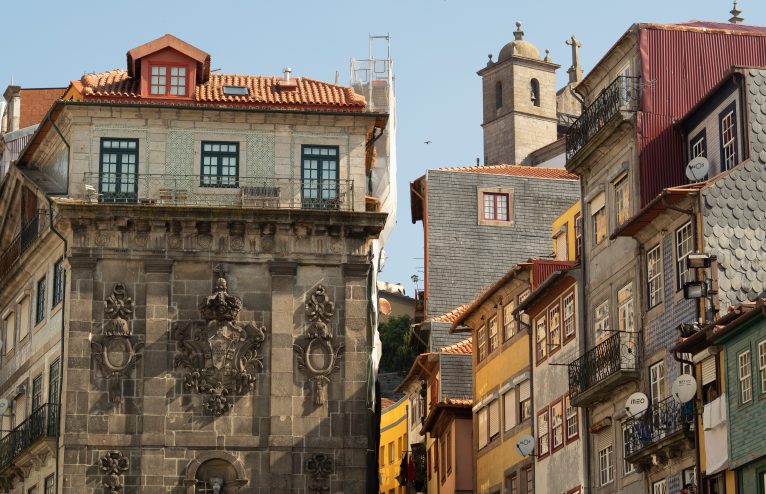