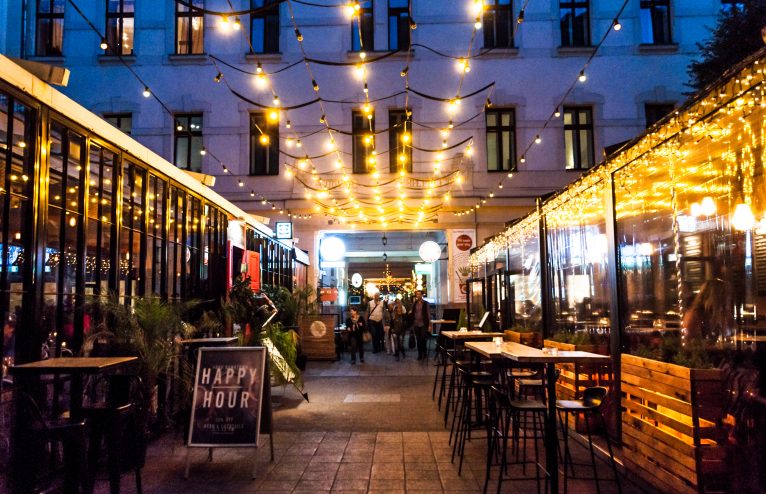 The Best Ruin Bars in Budapest

The thing to do when you’re in Budapest is not to hit night clubs or fancy restaurants.

Instead, you’ve got to do a massive pub crawl through the best ruin pubs in the city, famous simply for the fact that they’re literally built up in ruins. These are the places where everyone from the crazy stags and hens, to the who’s who of Budapest hangs out. Here are my top 5 ruin pubs to check out the next time you’re in Budapest.

Ankerâ’t is an ubercool ruin pub where you’ll see the tattooed masses of Budapest. They’ve got live shows and open mikes happening every so often where you can hear newbies rap in Hungarian. The interior is super minimalist with just one huge bar in the party area and bare faced tables and chairs everywhere, at night though it looks quite pretty with its lanterns everywhere.

This isn;t technically a ruin pub, it’s more of a collection of ruin pubs, flashy bars and restaurants all built up around a courtyard and is always noisy and full of people. This is the place to be when you want some variety in your night. Although it’s not the cheapest of places, Gozsdu is definitely a fun place to hang out if you’re tired of sticking to one spot every time (especially if you have some fancy friends that don’t particularly like the concept of ruin pubs).

Just 30 seconds down the road from Gozsdu, Ellato Kert was where I had one of the best nights in Budapest! It’s a huge open space playing funky music, they’ve got foosball tables set up, a massive dance floor and great steak sandwiches.

Another member of the Kazinczy street brigade, Szimpla has to be on everyone’s top 5 list of ruin pubs in Budapest. The interior is huge and crazy, full of completely random objects everywhere. They have a shisha area with a bathtub-cum-sofa which you can sit in and there are teddy bears lined up all along the walls. They even have old bikes and vintage cars in there. The menu is pretty standard and for some strange reason, carrots is a popular thing for them to sell!

Instant is where you go to end your night. They close up shop at about 6am and have loads and loads of different rooms (27 in total) playing all kinds of music whether it’s old school cheese, funky house or club bangers. There are interesting adornments all around the building like a bright pink pig disco ball, a herd of plastic bunnies and even an owl with boobs! The only thing I’d warn you about is that it can get quite sweaty, so bring a fan!