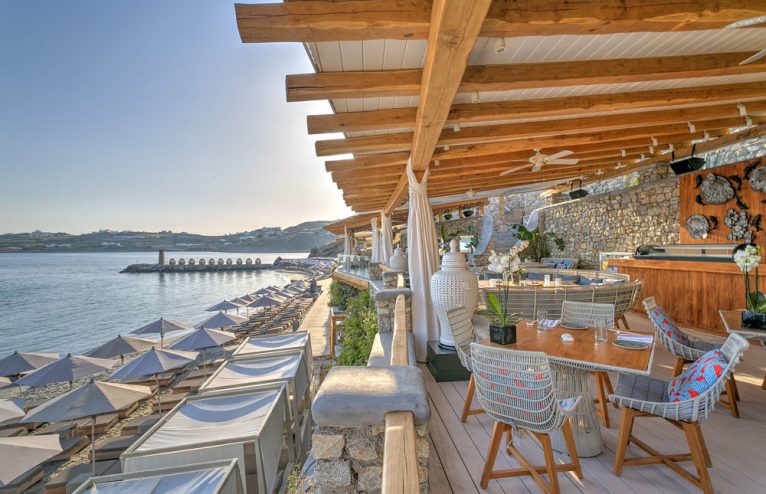 I hope you enjoyed reading Part 1 of the Ultimate Summer Guide to Mykonos. Part 2 takes you to the later part of the evening. What really stands out is the sunsets and the nightlife, and if you stay out late enough, the sunrises. We all have iPhones full of sunset pictures, each one more beautiful than the first. This will be one of those instances of returning home only to tirelessly scroll through hundreds of them as you fondly reminisce about those sunkissed Mykonian moments!

Where the most western part of the town meets the sea is the area known as “Little Venice”, with bars and restaurants all constructed right on the sea’s edge. This is the perfect place to either continue after lunch or start before dinner. The most touristy spot, but wholly unmissable.

These are my top picks for dinner… and onwards.

The location couldn’t be better. Under the historic windmills, on a waterfront peninsula, it almost feels like you are floating on the Mykonos bay. Enter through a narrow passage where they have displayed  iced selections of their daily catch. Keep an eye on your choice of seafood for dinner. Fresh, genuine Greek food with mostly sharing platters. With open views over the bay, its a good idea to arrive early to catch the sunset at dinner. If you’re looking for something upbeat, this is the place for you. The night here inevitably leads to dancing on tables, great music and a very friendly atmosphere (and possibly some late night plate-smashing!)

The new experience from Hakkasan comes from the same owners as Nammos, it is a new hotspot for the rich and famous travelling to Mykonos. The whitewashed Chora background is fused with an Aegean accent and the space is split between an open-air dining room, lounge bar and private dining room. It draws on an ‘Izakaya’ theme literally meaning “the roof with alcohol” – taking you from drinking to dining to dancing. Ling Ling brings sexy Cantonese supper club style that transforms into a nightclub with great music curated by London resident Pathaan. Mostly sharing dishes, the menu includes crispy duck roll, crab skewers and dim sum platters, with steamed and grilled fish platters alongside classic Cantonese dishes. They have put an emphasis on the cocktails and the wine list here, with the food accompanying drinks instead of the other way round.

As you would expect of any Nobu establishment, here you have luxurious dining and celebrity spotting. Set in The Belvedere Hotel, it is by far one of the prettiest settings. Located poolside in a fully outdoor space with sexy banquettes and canvas covered director style chairs surrounded by glowing lights and creeping bougainvillea vines. Legendary dishes on this menu include black cod with miso, new style sashimi, classic ceviche, octopus salad, rock shrimp tempura with ponzu sauce, spicy garlic shrimp, daily lobster specials and much more. Try to nab a table around 9.30pm when it starts to pick up. Between 31st July and August 4th each year, Chef Nobu Matsuhisa returns to Mykonos for the annual Nobu Food Festival. This year will be the 13th year of the Festival.

The world’s first beach Buddha Bar, this is definitely one of the island’s coolest hotspots. Although a little further from the main town, it is arguably one of the most enviable spots, based in the Santa Marina Hotel on a private peninsula, offering a super cool destination supper club and beach bar right above the Ornos shores. The excellent Buddha Bar chefs curate rotating menus showcasing an interesting fusion of Mediterranean and Japanese food. And the sushi is spectacular. With a great DJ backbeat, enjoy a sophisticated mix of style, music, gastronomy and mixology.

Without a doubt, an institution in Mykonos, Interni is the place to be. Walk down a secret passageway and find yourself in exquisite gardens, with the most beautiful lighting accentuating this venue with the white bursting into the sky. Sheltered from the winds but completely open, you will find a very trendy young crowd of jetsetters and Athenians alike enjoying fresh Mediterranean cuisine. It gets kicking a little later so book for dinner from about 10pm when it becomes a full dance lounge so you can enjoy the vibe until closing at 3.30am.

Originally opened in 1967, Remezzo catered to the jet-set party crowd and set its name as one of the island’s leading clubs. Since 2014, it relaunched as the go-to restaurant and bar, and is frequented by Mykonos regulars. With a location that offers panoramic views of the sea and Gialos, the excellent menu and impressive wine list, you will most likely stay here till dawn, for which it is so famous. Enjoy a beautiful sunset and music selections by the resident DJ.

If you decide to continue the night after dinner, try these 3 spots for guaranteed fun.

Cavo Paradiso, the 3,000-capacity clifftop danceteria where DJs David Guetta, David Morales and Satoshi Tomiie have played. But this gets going from 2am. So if you’re ready, change the heels for some traditional Grecian sandles and get ready to dance the night away!

Those in the know go to Bar Jackie O’ near the old harbour post dinner and pre club. Most likely named after the former first lady, who frequented the island in the 1960s, it has drag shows, Madonna remixes and the motto ‘from sunset to sunrise in style’.

Astra is a short walk inland and welcomes a dose of chic amongst the swarms of people and shops. Enjoy Athen’s top DJs inside the club or find a spot on the stone terrace and appreciate the music in the background. August has a reservation and bottle only policy for Rosé and Vodka.

For lovers of real ‘clubbing’, Space is the go-to in Mykonos, and the newly opened Toy Room. The creators of London’s Toy Room have brought this and Project Mykonos, working hard to make its impact on the Mykonos party scene, but certainly bringing in the well travelled expat crowd to party until the early hours. 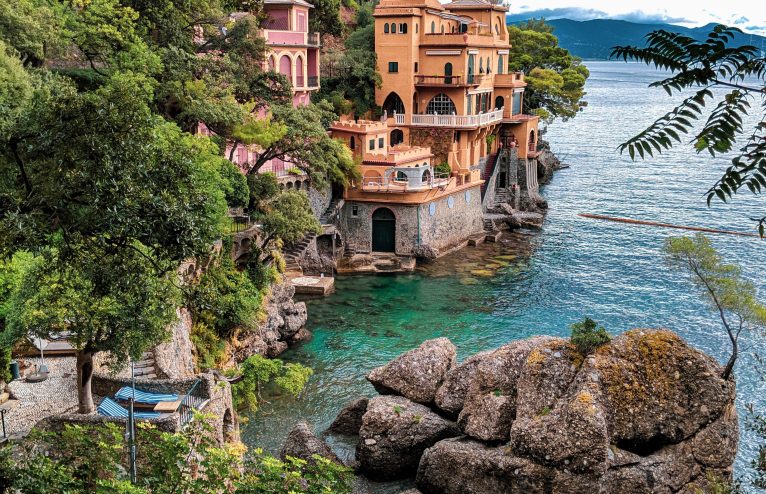