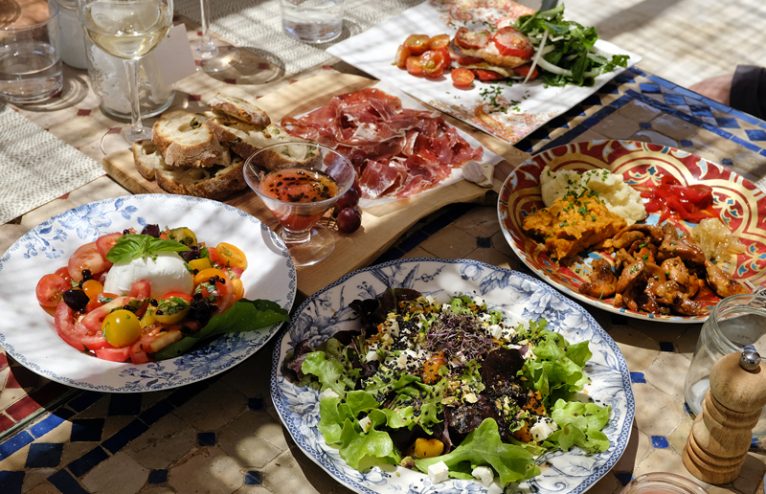 The ultimate clubbers’ paradise in the Balearic Islands is in the middle of a food revolution.

Dining al fresco at a rustic dark-wood table as the sun sets, being gently misted by cool water every few minutes from nozzles overhead as I linger over a melt-in-the-mouth burrata and peppered strawberry salad, I think to myself: “This is all wrong.” My eyes dart suspiciously around the packed restaurant, encountering nothing more than tables of relaxed, well-heeled diners enjoying Ibicencan specialities and light conversation.

Where’s the techno? Where are the lobster-red, loud-mouthed Brits? Where’s Rhys Ifans pouring straight liquor into his eye socket?

You see, I’m in Ibiza – and I have certain unshakeable expectations.

If you weren’t a teen in the summer of 2000, you’ve probably never seen Kevin and Perry Go Large. But I was, and I have. The film follows the misguided exploits of two teenage boys, Kevin and Perry (played by Harry Enfield and Kathy Burke respectively) as they clumsily navigate their way around the outrageously cool Ibiza club scene while attempting to get laid.

And so I stayed away from the hard-partying Balearic island for the next 17 years, figuring that the cocktail of STDs, ecstasy and judgemental bouncers immortalised on screen would most likely trigger some kind of mental episode.

Yet here I am, almost two decades later, sipping a glass of chilled organic wine and following the salad with a plate of locally-sourced courgette flowers stuffed with ricotta and cucumber sorbet – all without an LSD tab in sight. I soon discover hallucinogenics aren’t likely to be found in Ibiza’s picturesque Old Town; it apparently used to be home to a number of seedy, run-down clubs, but has since been transformed into a centre of upscale dining.

El Portalon, the Old Town’s newest establishment and already leading the way in reinventing traditional Ibicencan cuisine using local, sustainable ingredients, is the setting for my Damascene moment. It’s the brainchild of farm owner Anne Sijmonsbergen, the face of Ibiza’s burgeoning farm-to-table food scene, whose irrepressible energy was in part to blame for me finally taking Ibiza off my personal “no-fly” list.

“You’ve got to try the squid stuffed with sobrassada,” she says insistently in her no-nonsense American accent, despite my protestations that I’m a pescatarian and sobrassada is a traditional Spanish sausage. “It’s all local, the pigs are sustainably farmed – why are you a vegetarian? Honestly, if you’re a vegetarian for ethical reasons you shouldn’t feel guilty. Trust me.”

A whirling dervish of passionate opinions and creativity, Anne’s brain doesn’t seem to stop; one minute she’s encouraging us to try the restaurant’s signature thrice-cooked potatoes, the next she’s schmoozing at another table with the producer of Made In Chelsea. Her husband Rene, meanwhile, sits contentedly chowing down on a Chateaubriand as his wife spins around the tables, showing face, making diners feel attended to, signing copies of her Ibizan seasonal cookbook, Eivissa, as she goes.

Looking around at the many smiling faces – the restaurant is fully booked – it’s hard to believe the place only opened six weeks ago. Or that it’s Anne’s first restaurant venture. “She’s the creativity – I take care of the boring paperwork,” Rene says, half-jokingly. Her business partner Justin Mallett, meanwhile, deals with logistics.

We meet him the next day after a night in a villa once graced by the Camerons – it’s a beautiful old stone building that’s part of Can Riero, Anne’s 450-year-old farm in the rural north of the island, complete with outdoor pool and menagerie of friendly pets skipping around the yard.

Justin whisks us off to Babylon Beach Bar, another of the restaurants he’s a partner in, to try a different slice of Ibiza’s farm-to-table scene. As the name would suggest, it’s a beach bar – but the vibe is a world away from the likes of Blue Marlin, a notorious establishment in the south where obnoxious billionaires drop €100,000 on Champagne in a day without a second thought. 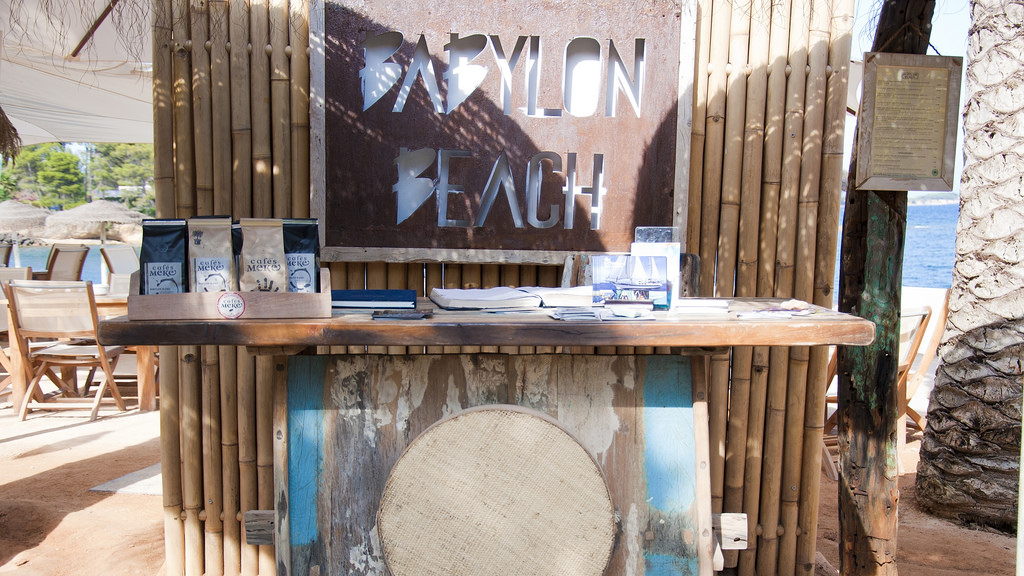 “We just wanted to create something really authentic,” Justin explains. “We didn’t want it to be pretentious or sceney – we wanted to make food and drink that seems simple, but there’s actually more to it.”

So the pina coladas are created using Babylon’s inhouse-produced white rum, and topped up with homemade toasted coconut syrup. The bread is made in the bar’s onsite bakery because, in Justin’s words, “They can’t make bread on Ibiza.” The pork is sourced from C’an Pere Mussona, a local farm that has set up a breeding programme for the nearly-extinct Ibicencan black pig; all the animals are reared outdoors in an environment free from chemicals and pesticides.

I only know all this because Justin tells me. There’s nothing on the menu to indicate the deep level of care that goes into selecting just the right ingredients, bought locally wherever possible. With a growing trend for calling anything and everything “organic” and “sustainable” in a bid to attract the moneyed crowd, it’s refreshing to discover a place where the principle is lived out but not shouted about.

But there does seem to be a genuine food revolution going on in Ibiza right now, and everyone’s in on the action. As we go to leave Babylon, we’re accosted by long-time island resident Sid Shanti, who confidently informs us: “I am farm to table.” He’s just launched a line of hot sauces using Ibiza chilies. “Take some!” he insists, pushing sample bottles into our bags as we make our excuses. From there, the delectable dining experiences come thick and fast.

My avocado on rye bread breakfast at the Giri Café comes with an iced coffee and a side of restaurant philosophy: “We carefully curate our evolving menus to reflect the changing seasons, cherry-picking the finest organic, pesticide-free ingredients from local markets and farmers – or by growing it in our own garden,” reads the menu. 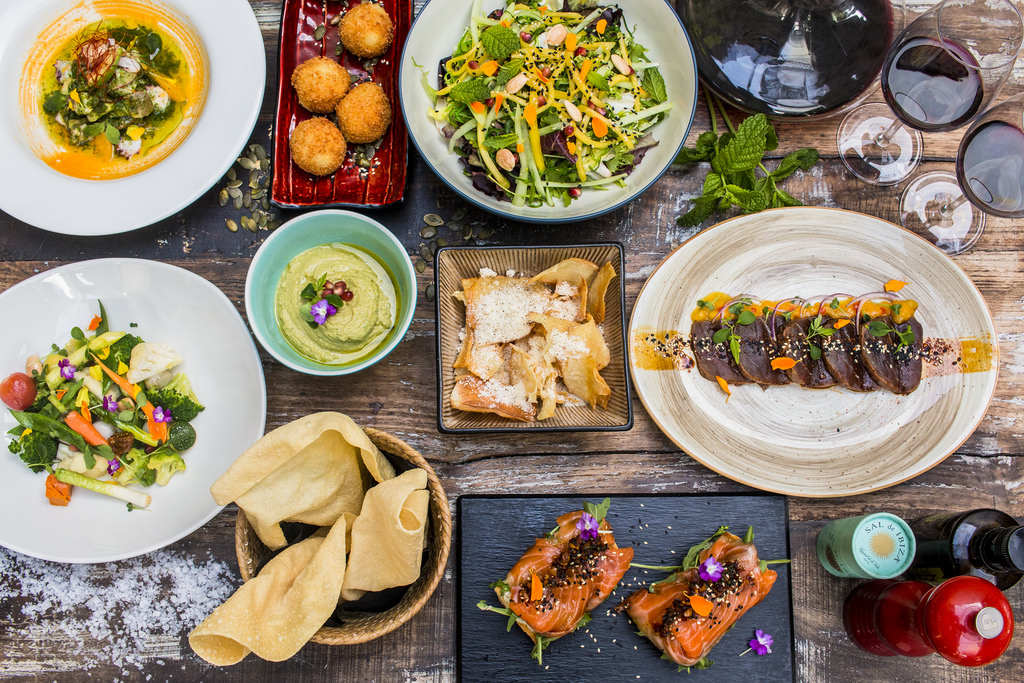 And that night at Lamuella, we sample one of the high concept restaurant’s off-the-wall tasting menus, which includes langoustine Vietnamese pancakes and grissini with smoked eggplant, arugula cream and roasted tomato. Alongside the fine dining, the achingly cool open-air space offers a boutique shop selling bespoke garments and jewellery made in Goa, a small gallery and a separate area that hosts regular ballet and yoga classes. “Not everyone understands what we do, but the right people do,” Ilan Da, one of the three founders, says.

That evening, back at Can Riero, I ask Anne whether she ever thinks about leaving. “We’ve been here for 12 years now – sometimes we stay up late into the night talking what our next adventure could be. And then…” She makes a sweeping hand gesture that manages to take in the off-white farmhouse, glimmering in the dusk; the rows upon rows of organic tomato plants just now coming to fruition; the chicken coop where the family collects fresh eggs each morning; the immaculate view of the rolling Ibiza hills in all their untouched, rural beauty. And then we say: “But where else could we go?”

Where else indeed? Seventeen years on from Kevin and Perry, I finally see what all the fuss is about. 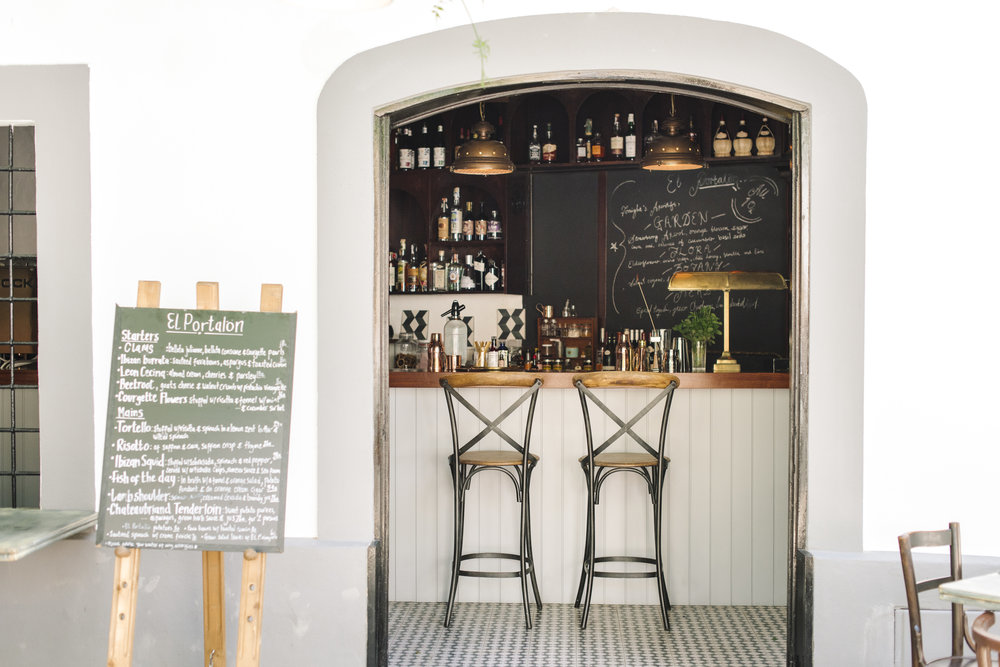 This understated farm-to-table restaurant in Ibiza’s Old Town is already developing a bit of a buzz. It sources as much produce as possible from co-founder Anne Sijmonsbergen’s own farm, which grows the only organic heirloom tomatoes on the island. The seasonal menu draws inspiration from Sijmonsbergen’s first book, Eivissa: The Ibiza Cookbook, which came out last summer. Try the restaurant’s speciality dish, the squid stuffed with sobrassada – vegetarians, opt for the creamy burrata followed by risotto.

This unassuming café in San Juan gets hugely popular for brunch – booking is essential, especially for a table in the pretty outdoor garden, where the team also grows small batches of fruit and vegetables for use in Giri’s dishes. Breakfast features juice freshly squeezed from the café’s own oranges, locally roasted organic coffee and poached eggs from free-range Ibiza hens. The Giri Café also serves lunch and dinner. 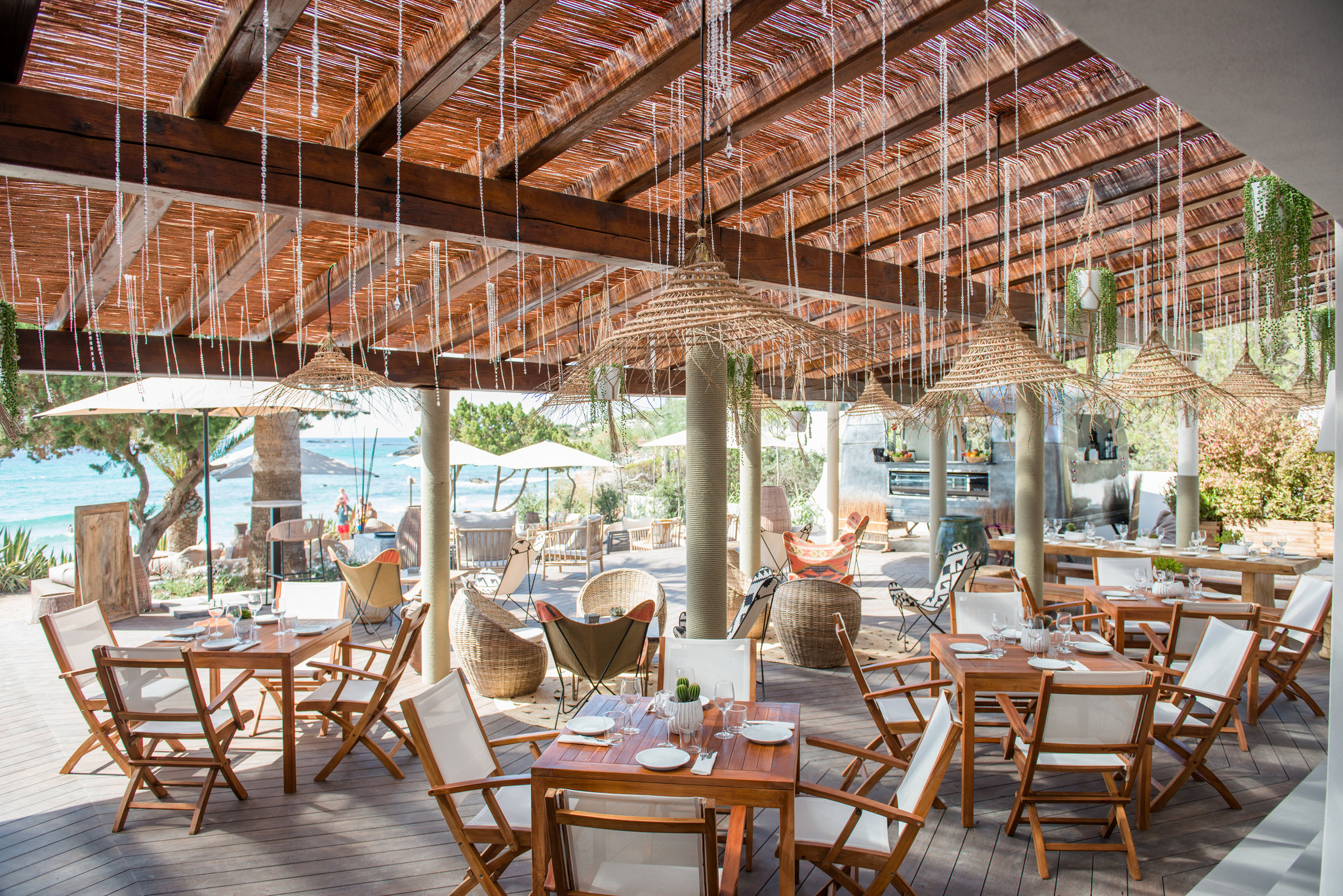 Aiyanna Ibiza was launched in June by the team behind the popular Amante Ibiza. Vegetables grown in the restaurant’s own garden are complemented by views of the ocean at Cala Nova, while immaculate white furnishings, brightly coloured sun shades and absurdly attractive staff are already making Aiyanna a destination to be seen at. It also boasts morning yoga sessions and a discreet onsite boutique. 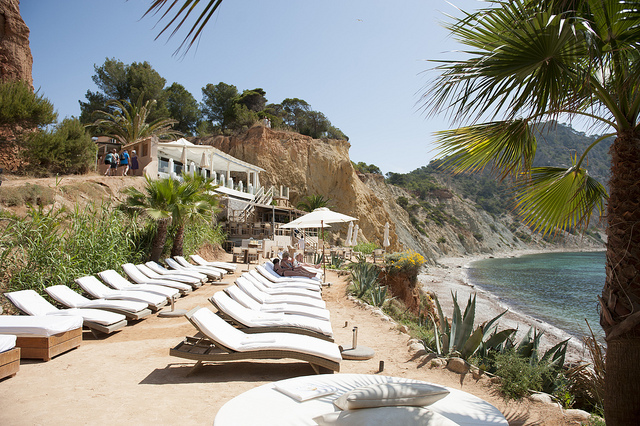 A supremely chilled-out beach bar for those who are happy to swap the pretentious crowd for laid-back vibes. All the bar’s bread is made in the on-site bakery – try the rosemary-infused focaccia with roasted tomatoes for sweet and salty all in one bite. Also be sure to order a cocktail – many of the spirits are made in house. 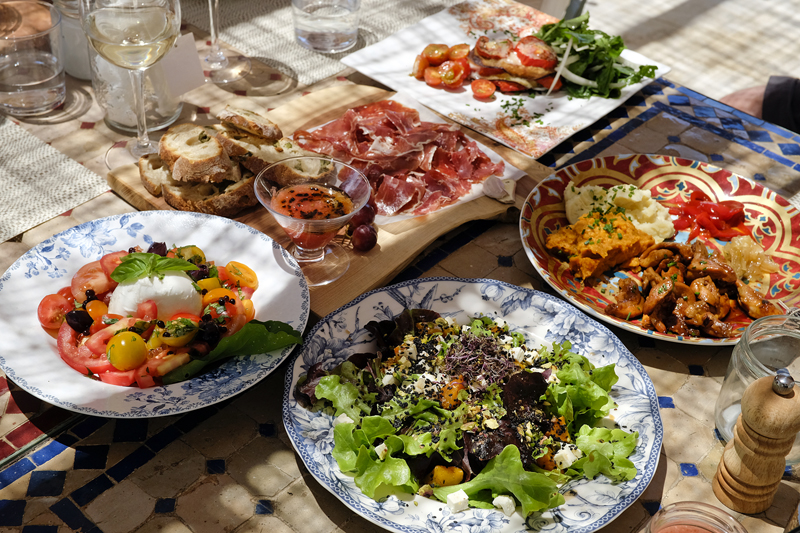 An organic restaurant, shop and art gallery all in one, Aubergine offers a farm-to-table seasonal menu that includes salads with vegetables picked straight from the restaurant garden, plus sharing plates, mains and children’s meals. The wine is organic and the water is purified via a hi-tech osmosis system.