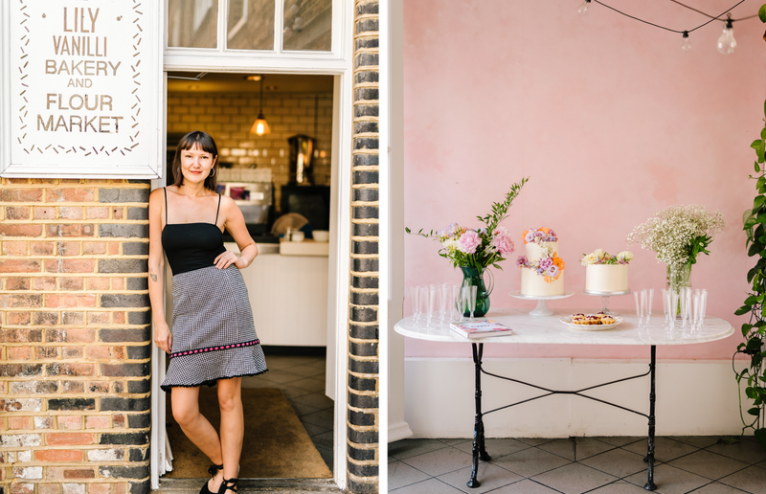 Lily Jones is the creative brain behind one of London’s most loved cake bakeries, Lily Vanilli. Her bespoke cakes have won her a tribe of loyal followers, including Elton John and Kate Moss who love her unconventional and intricate designs.

We chatted to the ex-graphic designer at her Hackney bakery about crafting a new career, bespoke baking and where she eats out in London.

So how did it all start?

I started LV in 2008. It was actually unplanned, it really evolved from selling a few cakes to friends and then I was featured in a piece in the Times about how baking was going to be a big trend (this was pre-Bake Off.). It grew from word of mouth and press and within six months of the article I was stocked in Harrods, had my first book deal and was baking for Elton John – it was very unexpected.

What was the secret ingredient to the business taking off so quickly?

It was a case of the right thing at the right time. The rise in popularity of baking has been so rapid and immense since then that it was clearly the zeitgeist. At the time, I didn’t know anyone else who baked, it was my weird, nerdy hobby, but that’s all changed so much. I was doing creative and modern things with cake, which was really different at the time; it just seemed to make sense to people. 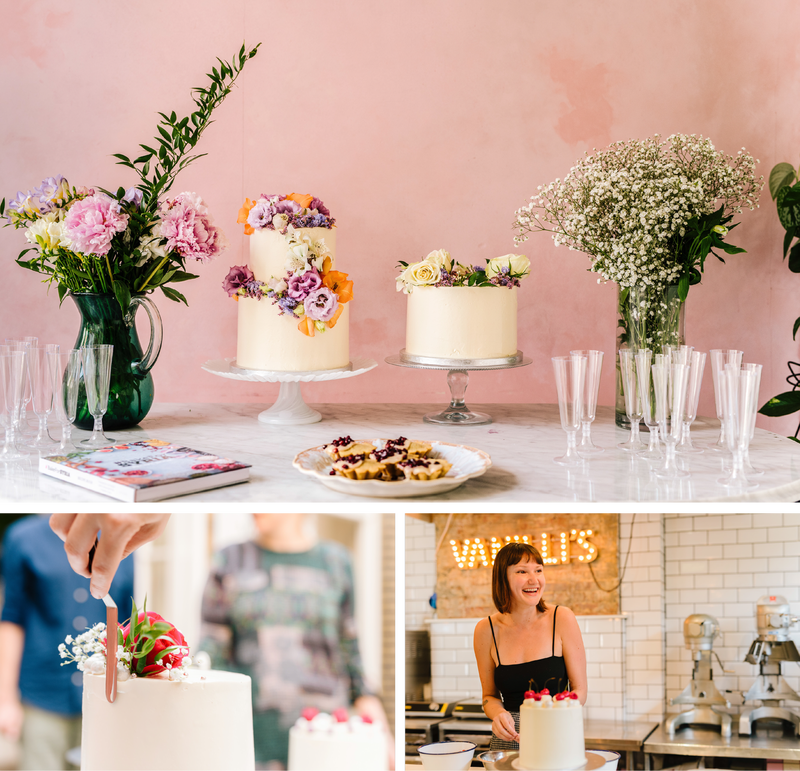 How do you think baking culture has changed?

I think the last ten years has seen a return to an era that predates commercially produced food and cakes; it was almost an answer to it. At the time it felt very connected to the 2008 crash; there was this revolt against the supermarkets and big institutions and corporations, and a reconnection to making things yourself with authenticity and quality; or at least buying from people who do.

Within six months I was stocked in Harrods, had my first book deal and was baking for Elton John!

Our baking culture has changed massively through Bake Off and Instagram. It’s now more a part of everyday life – even if people aren’t actually baking themselves, but simultaneously we’ve seen a huge rise in artisan and independent bakeries in this country. They had been in steady decline since the First World War but we started to see a small increase in the year I opened mine. Since then this country has gained countless wonderful local bakeries with an emphasis on quality and it’s a really great thing to be a part of.

Tell us about some of your most iconic creations…

There was the bleeding heart cake that went viral in 2010, sparking countless copycats and resulting in 10,000 orders one Valentine’s Day, as well as TV coverage around the world. That was my gothic baking period and I put out a book ‘A Zombie Ate my Cupcake’ which sold 100,000 copies and really struck a chord for people who love zombies and cakes (who knew?) 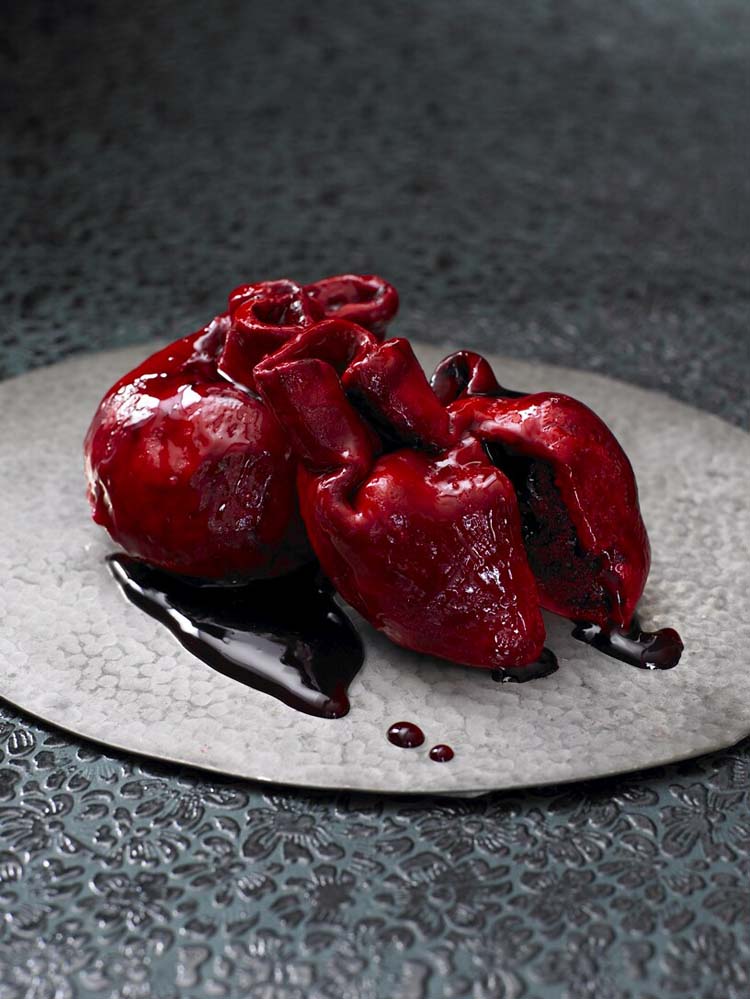 I made a cake sculpture for the V&A Museum that was exhibited as an artwork, then cut up and eaten. Last Christmas I made a savoury (cheese and pickle) mince pie that people went crazy for.

I’ve made cakes for Kate Moss, Tilda Swinton & Michelle Lamy, commissioned by Jefferson Hack for AnOther’s 10th Birthday, made cakes for the cover of Lula Magazine and a huge installation of cakes for a shoot with Gary Card and Daniel Sannwald for Pop Magazine.

I’m lucky in that I get a lot of really creative briefs so there is always something fun happening in the bakery. I recently worked on a really unusual afternoon tea collection for a restaurant in Nanjing that I really loved.

Who are the role models for female bakers at the moment? And who are your role models?

I think Ruby Tandoh is a good role model for female bakers, she tells it like it is. Besides that I like anyone who is doing something original and different, especially as the market has become so much more saturated. I love love love Terri from Happy Endings, she is a genius and so underrated and also admire Ravneet Gill who is a really creative pastry chef but also runs Countertalk which offers support and community for women in kitchens.

From your beginnings in Columbia Road Market to now opening in Tbilisi through your own shop in Hackney, tell us about your experiences and the biggest lessons.

My experience has been quite unusual as it’s been very organic and grown in lots of strange directions. I have never had a PR person or investment or advertising, so I have grown through word of mouth and collaborations with creatives that I like.

There have been so many experiences over the years – helping open a bakery in India and moving there for six months, consulting in Abu Dhabi and Dubai, working in Mexico, China, South Africa, Italy, and recently opening a shop in Tbilisi, Georgia, co-founding the YBF Awards, founding #BakeForSyria (which raises money for the Unicef Syria relief fund) and writing three recipe books.

I have always been driven by my passion for baking, creating and learning rather than a conventional business model. The biggest thing I have learned is to keep pushing myself and making sure that I enjoy what I’m doing.  Also that I really, really love baking (which sounds stupid) – but I need to remember that while it’s easy as the business grows to spend less time in the kitchen, I really need to make time to bake or I start to get depressed very quickly.

What is the biggest challenge you have had to overcome in your career and how did you manage it?

I think initially it was just learning to say no to the right things., to understand what I want from my business and my life and keep true to that. Early on we went into big department stores too soon and it wasn’t the right fit for a business model like mine. It can really suffocate a new business so I always advise people to be wary of offers for things they wouldn’t have naturally gone after themselves, and didn’t structure their business for – even if it seems like a good opportunity.

What can guests expect from a Lily Vanilli bakery?

A creative, modern, sometimes playful, approach to baking with a focus on flavour, texture, quality and seasonal produce.

Your favourite place to eat and drink in London is…

Where in the world would you travel to eat?

I love love love the food in Mexico and can never get enough, this year.

What’s at the top of your bucketlist?

I’d really like to go to Japan finally, I’ve never been and I think it will be hugely inspiring.

What is your guilty pleasure?

I have a lot, but I’d probably have to say chips and good red wine. Way too often.

The industry is very demanding, how do you ‘cool off’?

I’m very good (I think?) at work-life balance. I have always prioritised my quality of life over business success, which probably explains a lot. I travel well and often and make lots of time for friends and relaxing and having fun. It’s very important for me to laugh a lot. I love baking and I’m so grateful for my job every single day but it’s not the only thing.

What is the future looking like for Lily Vanilli?

Hopefully my second bakery in Tbilisi will grow; I am really enjoying it there. I just hope to be able to do what I am doing for as long as it makes me happy.

What’s the best career advice you’ve been given?

Don’t do yourself out of your dream job and become an administrator for it; stay in the kitchen if that’s what you enjoy.

Follow Lily Vanilli on instagram here and for more information on her bakeries and bespoke orders, take a look at her site here

To read more interview’s with our favourite female Chefs, take a look here