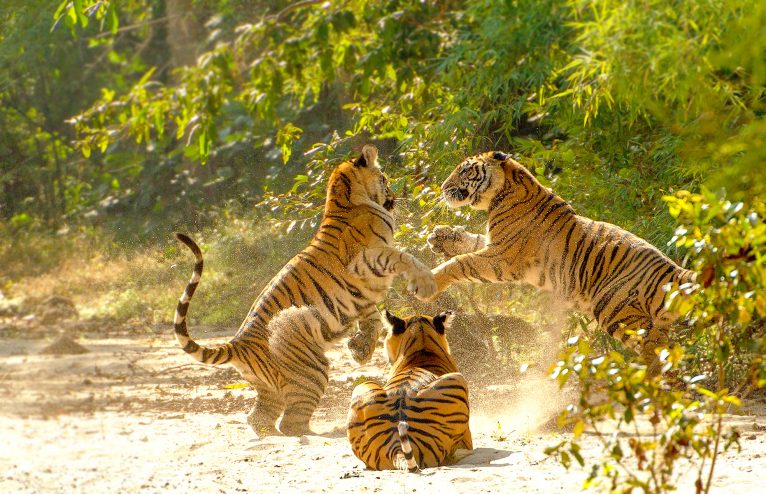 Dynasties: Where To See The Animals

Here in the UK we’ve been wowed by the BBC series Dynasties, presented by Sir David Attenborough, which follows the lives of five extraordinary, endangered animals in amazing detail.

These include chimpanzees, penguins, lions, painted wolves and tigers. The program has helped to raise awareness about the lives of these vulnerable animals and their struggles to live alongside humans.

We’ve put together the most incredible places to see them up close.

In recent years, chimpanzees have disappeared from four African countries due to deforestation and commercial hunting for bush meat, with the animal now listed as endangered on the IUCN Red List of Threatened Species.

The Mahale Mountains National Park, named after the 8000 ft Mahale Mountain range in western Tanzania, is home to the largest known population of chimpanzees in the world. The area is one of two in Africa were chimpanzees are protected and because of the remote location – the area is only accessible by foot and boat – they flourish without human interference.

A remote sanctuary only accessible by light aircraft and boat, Greystoke is tucked away on a far-flung beach along the eastern shores of Lake Tanganyika, with just six luxury bandas (open-fronted cottages). Each day guests are guided through the forest to quietly observe chimpanzee life.

The number of Emperor Penguins, the largest and heaviest of all penguins, is in decline because of a lack of sea ice due to climate change. Each year, they lay just one egg in temperatures below -40 C and hope that their baby chick will survive – the BBC crew spent 245 days filming these penguins waiting for the exact moment for a chick to hatch.

We recommend Silversea’s 14-day Antarctic Adventure – you’ll sail in a luxury cruise ship from Ushuaia through to the Antarctic Peninsula for close-up encounters with penguins, seals and whales, alongside research experts who will guide you through the breathtaking surroundings.

Wexas Travel (wexas.com) offers a 14-day fly-cruise Antarctic Adventure from £9,540 per person based on two sharing.

African lion numbers have plummeted by over 40% in the last three generations, due to loss of living space and conﬂict with people. There are now only 20,000 left in the wild, with 80% of the population in eastern or southern Africa.
The private Naibosho Conservancy, on the borders of the Masaai Mara National Reserve in southwestern Kenya, has one of the highest lion population densities in the world. With a maximum of 150 guests staying in conservancy at any one time, and with close to 100 lions within the area of just 200km², this is an exceptional place to spot lion, with far fewer vehicles than in the wider Mara.

There are less than 7,000 wild dogs found in Africa, making the species one of the most endangered in the world, and consequently one of the rarest to see on safari.
The Southern Luangwa Valley in east Zambia is the perfect location to see wild dog, otherwise known as the painted wolf, particularly between July – September. The South Luangwa National Park area is known for its abundant wildlife, with walking safari the best way to see the animals gathering along the banks of the Luangwa River.

This quintessential camp is located in the heart of the South Luangwa National Park, one of the only camps in the area. From there you can walk to the nearby lagoon, which draws animals, including wild dog, from the surrounding plains.

In 2010, when the future for tigers was bleak (only 3,200 wild tigers were left), the World Wide Fund for Nature (WWF) consolidated a global effort to save them from extinction. Since then, there has been a steady increase in wild tiger numbers worldwide, especially in India, which houses half of the world’s tiger population.
Madhya Pradesh in central India is one of the best places in the world to spot tigers in the wild. The state is home to tiger sanctuaries Kanha and Bandhavgarh, where Dynasties filmed the tigress Raj Bhera and her cubs, as well as Pench National Park where ‘The Jungle Book’ was set.

Audley Travel (www.audleytravel.com) offers an 8-night tailor-made tiger safari in Madhya Pradesh in India including tiger tracking in Bandhavgarh from £2,409 per person.