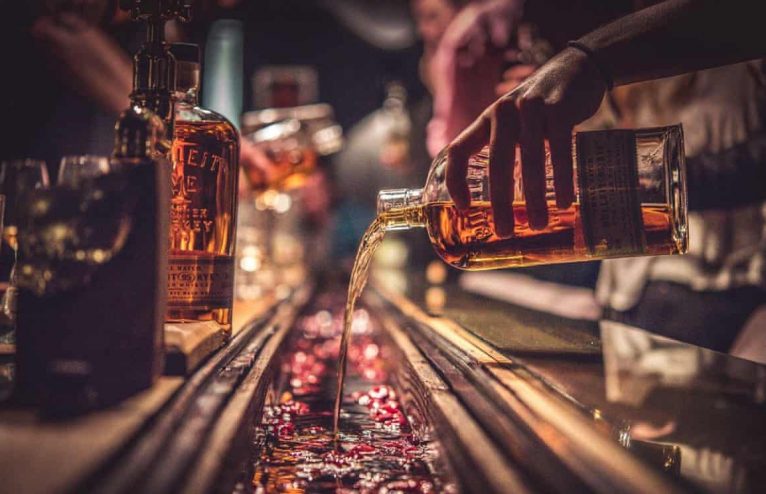 London isn’t all that great at staying up late. Poor ol’ love. Licensing laws in the UK unbelievably still take their steer from the second World War when the powers-that-be wanted us safely tucked up at home with the black out blinds firmly in place, and so, just like that – 11pm became the cut off at the bar.

Over the years there’s been some small tweaks and bends (if you’re serving food – it’s midnight and if you put a membership scheme in place – it’s as late as you like – normally 3am). But what if you just want a well-priced, tasty drink in a nice dark bar and not be made to feel like you’re rushing through every last drop before the dreaded bell sounds at 10.50pm. TEN FIFTY!? Ludicrous…

So here’s some ideas, some names to drop and some insider info on how to outstay your welcome at London’s late night bars…

If you’re looking for some good late night food – the ground floor of this tiny little Soho institution is a fairly good shout. But if it’s more dancing and margaritas you’re looking for, a wondrous treat awaits you in the basement. Now – there’s a trick to this one… You are supposed to be a member. And you’re supposed to have a card to prove that, but ask gorgeous Ismail nicely, be prepared queue in the cold til you’re given the seal of approval, sign the guest book and don’t ask too many questions – and you can become a member for the evening and stay up being a loony til at least three or four am. It’s not glamorous, it’s not particularly cheap but it’s damn good fun. Website

A naughty basement bar hidden underneath Mr Hix’s classic Soho dining room, which stays open much later than it should, more often than it should. Filled with over sized, slouchy sofas that are crying out to be cosied up on, this bar is a great shout for an after hours date. No judgement on a cheeky kiss in the corner here. Drinks are consistently delicious plus once a month they host Mark’s Lates, which are even looser and later than a ‘normal’ evening. Website

A bar of two halves with an uncharacteristically hassle-free late license. If it’s wine you’re after – stay on the ground floor – 68. There’s plenty of high and low tables so there’s usually somewhere to perch and the list is approachable and affordable. Lovely. If you’re more a fan of a mixed drink, climb the stairs to the Boston part of the venue and find a corner to slink into. With a menu of ‘Fancy Drinks’ celebrating the very best (and worst) of Soho’s shady characters – this is a great place to end your evening. Website

Sun Tavern
441 Bethnal Green Road, London, E2 0AN
Open til 2am on the weekends.

The Sun Tavern is a proper pub. The staff actually look up as the door opens and usually greet you with a grin, which for those that haven’t experienced that in a while is the old fashioned way of being welcoming and hospitable. How quaint. There’s proper music (you know – rock and roll music) but even better – there’s proper drinks. Well-made, well-balanced cocktails alongside some tasty beers. Just try not to tell too many people, because it’s not huge and certainly one of the best places to drink in East London. Website

Sack
The Napoleon Hotel, 9 Christopher Street, London, EC2A 2BS
Open til 2am on the weekends

Now – do not let appearances deceive you… yes it may look a little dishevelled – and yes – you are encouraged to draw on the walls and yes – there’s barely any furniture and what is there is horribly uncomfortable BUT… if you like sherry (tick) and you like disco (tick) and you want somewhere to just dance and be silly and not take yourself too seriously… hot foot it here. In the summer it’s a dream with the doors flung open onto the street – this bar is best enjoyed with a group of friends and nowhere to be the next day. Website

Bar Italia is a no brainer for late night Londoners, and a family-owned, Soho institution. First opened in 1949 (yes – really) it only closes for two hours a day so there’s barely a time you can’t grab an espresso (either in it’s original form or shaken to make a Martini) as you buzz from one dance floor to another.If the caffeine’s really kicked in, you can simply wait for breakfast to be served before heading straight into work. Perhaps not for the faint hearted but definitely one to try…

If you play your cards right…

To caveat this, Milk & Honey is a members club – but a rule was put in place some years back that non-members could be granted a sneak peek into the dimly-lit, clandestine bar if they made a reservation and they left by 11pm. Now back in my day, this rule was strict because it was brand-spanking new and the best place to drink in the world (officially) but… in 2019 (seventeen years after it opened – good work guys) – if you’re in and you’re behaving you might just get away with an after hours drink. And if you can, you should. Website A Drinking Guide To Amsterdam