A country made up of over 7,000 islands, The Philippines is not short of incredible places to spend a few days on the beach. Wherever you travel to in this amazing country, there is an almost bewildering choice of beautiful islands to discover, each with its own character, powder white sand beaches, and warm bright blue seas.

After spending three weeks being constantly wowed by The Philippines, it was easy to see why the country is widely regarded as one of the best beach destinations anywhere in the world. As I prepared to check in to the luxury private island resort Amanpulo for my final three nights however, I was wondering how anything could possibly top what I’d already experienced.

I needn’t have worried. Amanpulo – which is part of the Aman group and was opened in 1993 – takes things to a whole new level. Totally marooned in the middle of the Sulu Sea, Amanpulo is only accessible by the hotel’s own private charter plane which flies back and forth from Manila twice a day. With the flight taking an hour, nothing beats the feeling of seclusion that immediately hits you as the tiny propeller plane begins to descend towards Pamalican Island. From above, all you can see is the shallow reef-fringed waters, glistening perfectly blue, and thick jungle covering the centre of the island. The entire perimeter is pure pristine white sand, as fine as freshly fallen snow. 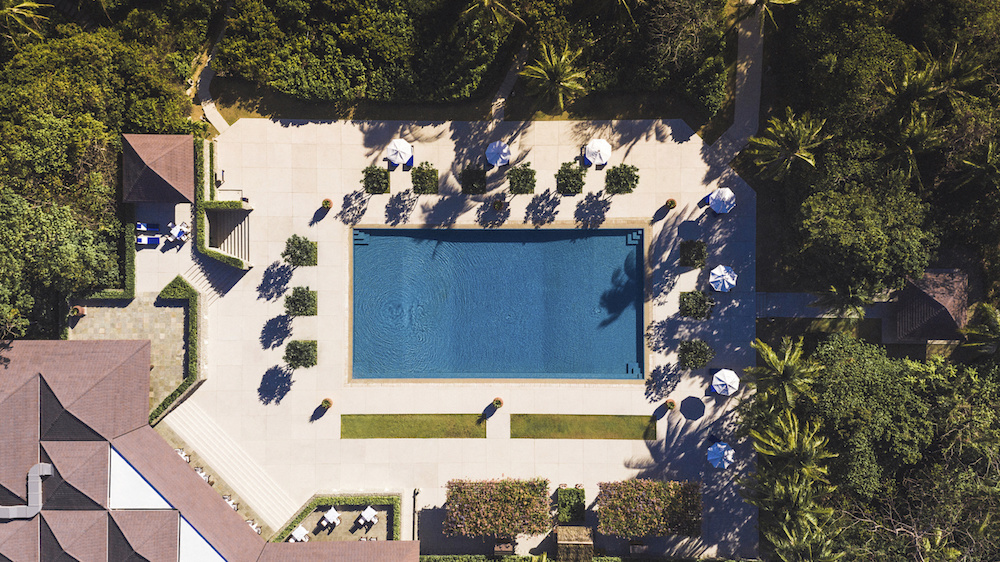 Upon stepping off the plane, the Aman experience begins straight away. Each guest is greeted by one of the hotel’s smiling staff and immediately whisked away on a golf buggy, which is then yours to keep for the duration of the stay. In all honestly, just whizzing round the island’s unpaved roads is a huge part of the fun in itself! The island is the perfect size – big enough that it feels like there are only a few other guests (even when it’s full) but not so big that you get impossibly lost. You can walk the entire island along the beach in just over an hour, which is best to do at sunset of course.

There are a 42 rooms, including beachside casitas and hillside casitas, plus some bigger multi room villas for families which have private pools. The casitas are designed in the style of traditional Filipino ahay kubo dwellings, with sleek timber frames and pitched roofs with rustic styling. They blend into the dense green surroundings extremely well, so the natural beauty of the island can shine at all times. You’ll probably see more tropical birds, such as the yellow oriole, and huge monitor lizards slowly waddling around, than you will other people during your stay. 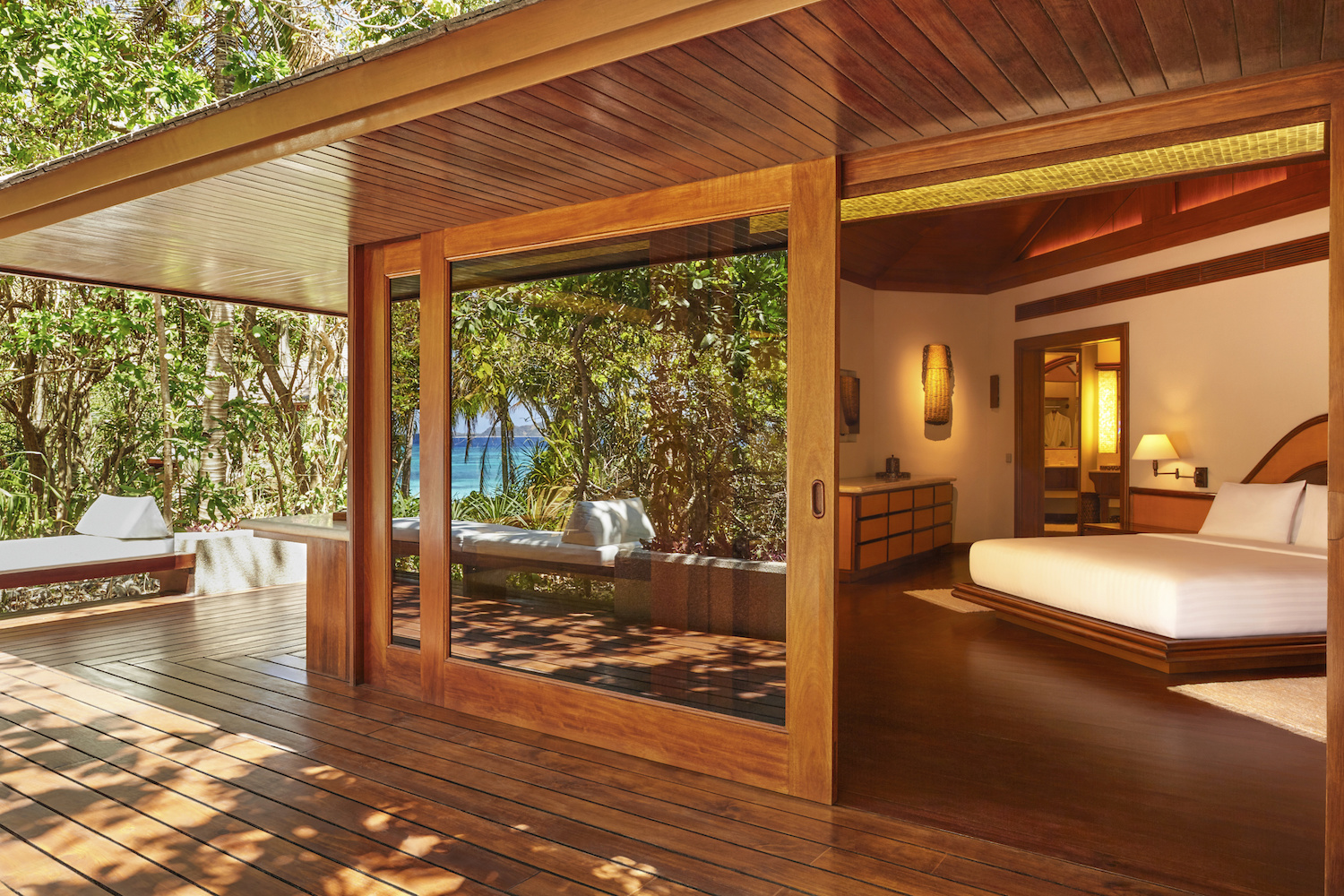 Inside the casita, it is of course pure luxury. There’s a huge separate bathroom with freestanding tub, rainforest shower, double sinks, two wardrobe spaces, and a dressing table. In the main living area, there are two day beds perfectly positioned by the windows, with wonderfully framed views of the beach and sea beyond. The massive super king size bed is big enough to get lost in, and there’s all the mod cons you need too including international plug sockets, flat screen TV, Nespresso machine and fully stocked mini bar.

What you get up to at Amanpulo is entirely up to you – it could be as lazy or as active as you wish. There are tennis courts, diving opportunities, boat trips, a gym, a jungle obstacle course, yoga, a spa, and so much more. I took a middle ground approach, taking plenty of time to relax on the beach, swimming in the beautiful clear sea as well as the resort’s main swimming pool, and joining the daily snorkelling excursion, which is part of a daily range of activities that are free to join. The range of tropical fish out on the nearby reefs is incredible, not to mention the population of huge green turtles, many of which are 100 years old (Amanpulo is part of a turtle conservation area). 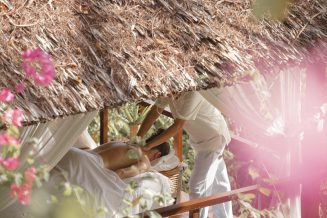 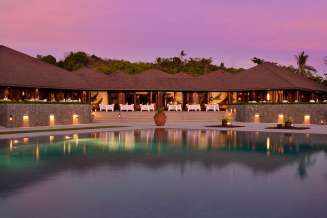 At Amanpulo, eating is an activity in itself, and there are several restaurants to choose from, as well as the option of room service. For Filipino and other Asian classics there’s the Club House; Nama meanwhile serves fresh sushi; for Mediterranean dishes there’s the beach club; and for a pizza there’s the secluded Picnic Grove, which is open at lunchtime only. There’s also romantic expeditions that can be arranged, such as a candlelit dinner at Gary’s Nest, on a hidden rocky outpost, and an early morning breakfast out on a sandbar surrounded by the ocean. As much as possible, ingredients will come from the Amanpulo’s own organic garden as well as fish caught by local fisherman.

A special mention should go to the staff who provide incredible service throughout. Through a longstanding partnership with the local community on the nearby Manamoc Island, the majority of Amanpulo’s staff are locals, many of whom commute daily by boat. It’s fantastic to see Aman working with the community in this way, and through a charitable foundation, they have also helped with education programmes and building schools on the island.

Coming from London, it’s easy to throw around the word ‘paradise’ anytime you’re near the sea and a palm tree. But Amanpulo really is worthy of the description, a truly jaw dropping setting, plucked straight out of every dessert island daydream you’ve ever had. With the island’s natural beauty only enhanced by the slick Amanpulo hospitality, this is a bucket list experience that is very hard to beat.

Rates start from £972.10 per room per night, including breakfast and all taxes and fees, based on double occupancy.