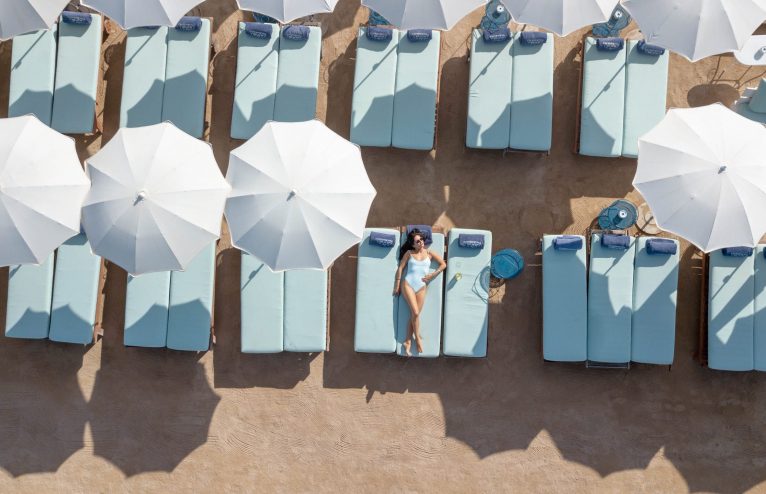 With the supper clubs on pause, Ibiza saw a return to its bohemian roots this summer. Right now, Eivissa is less about going to bed at sunrise, and more about spiritual sunsets, farm-to-fork suppers and explorative hikes to take in the more remote parts of the island.

It’s like Ibiza is reliving its 70s hippy heyday all over again. Rekindling the island’s Balearic roots, the slower pace is akin to a chillout track from an iconic Café Mambo sunset. In the words of iconic Ibiza hotel, Pikes: “2020 lockdown has returned the island of Ibiza to the pre-party wonderland the locals, bohemians and misfits knew and loved.”

That doesn’t mean there’s less to do; quite the opposite. In the absence of gargantuan dance  floors and EDM basslines rumbling through the island until dawn, there’s never been a better time to explore a different side to Ibiza. Sleep (because you’ll probably get more of it!) means your hotel hangout is even more important in Ibiza. And your to-do list might include less poolside lounging (read: recovering), and more seeing, doing, eating and drinking.

Here’s how to spend 48 hours in Ibiza. 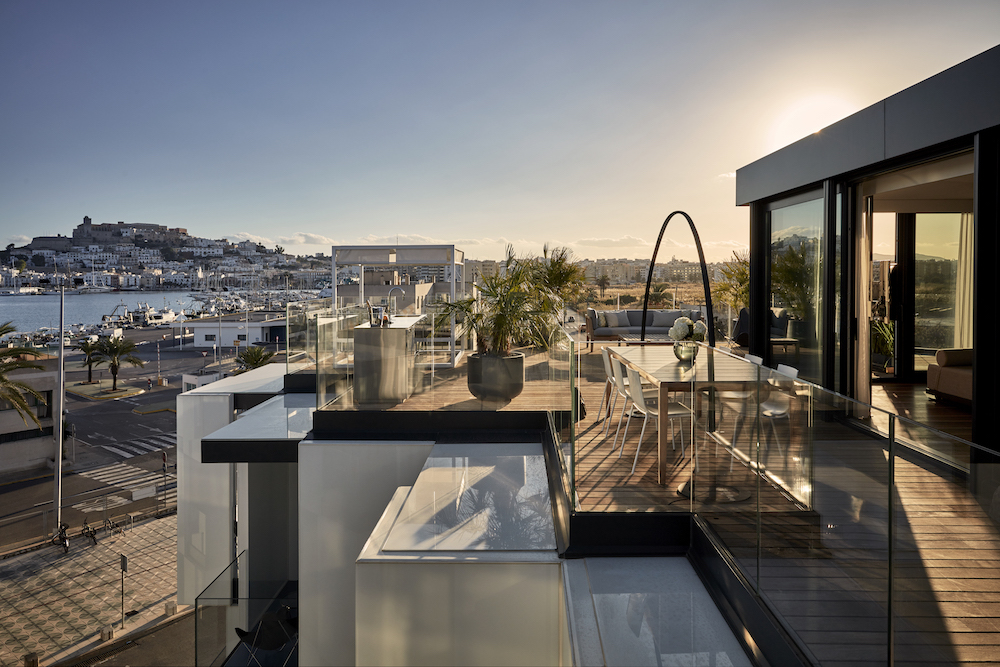 Masquerading as Ibiza Town’s coolest cubism art installation by night, Sir Joan Hotel is hip from the inside out. A mecca for Ibiza creatives, it’s prominently situated in Ibiza’s centre overlooking the port and Old Town. While the hotel has an urban chic aesthetic, the 38 rooms cleverly integrate maritime heritage in a nod to the neighbouring port. Think yacht-like walnut floors, ocean blue linens, and pummelled steel surfaces designed to glimmer like sunlit waves as they catch the light. The roomy bathrooms are kitted out in sleek marble and feature gigantic rain head showers and citrus-scented Zenology toiletries.

It’s all in the detail. For rainy days and lazy mornings, guests will find a mini library’s worth of vacation-inspired coffee table books, colourful boxes of Ridley’s playing cards, and a gourmet mini bar featuring temptations like local Sal de Ibiza salted cashews. And if you’re too chilled to get dressed? Cosy denim bathrobes hang waiting in the fitted wardrobe.

Some rooms feature not one but two balconies for a different aspect of Ibiza, while two luxe penthouse suites have the monopoly on 360-degree views of the island from the top floor. Tiled in deep green to match the surrounding tall palm leaves, Sir Joan’s statement triangular pool is the ultimate place to chill (and Instagram) during your downtime in Ibiza. 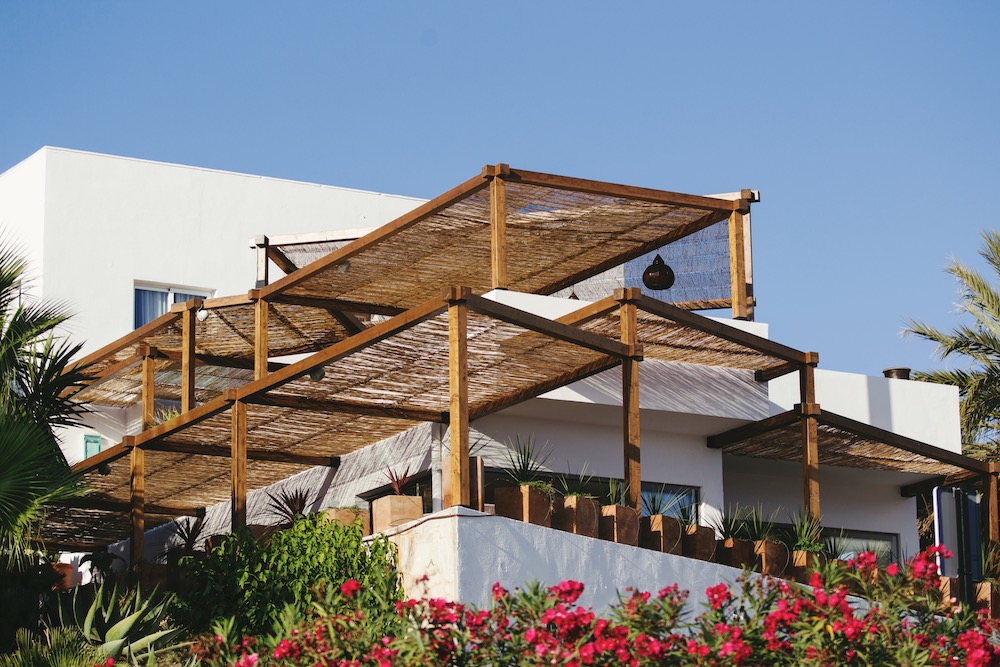 Sleep means your hotel hangout is even more important in Ibiza. And your to-do list might include less poolside lounging (read: recovering), and more seeing, doing, eating and drinking.

Stargazers, rejoice. Mikasa is a boutique city hotel with 16 individually designed rooms that are inspired by nature – and more specifically, the moon. Think 12 bedrooms based on the monthly moon and four ‘Season Moon’ suites ranging from Spring Phoenix to Winter Eagle that you can book depending on your mood (and favourite colour palette). For actual stargazing at night, head up to the hotel roof terrace, which gives you panoramic views of bustling Ibiza Town. Early birds can namaste for the day with the Miyoga daily sunrise yoga sessions.

Rates start from €200 for a double room.

WHERE TO EAT & DRINK 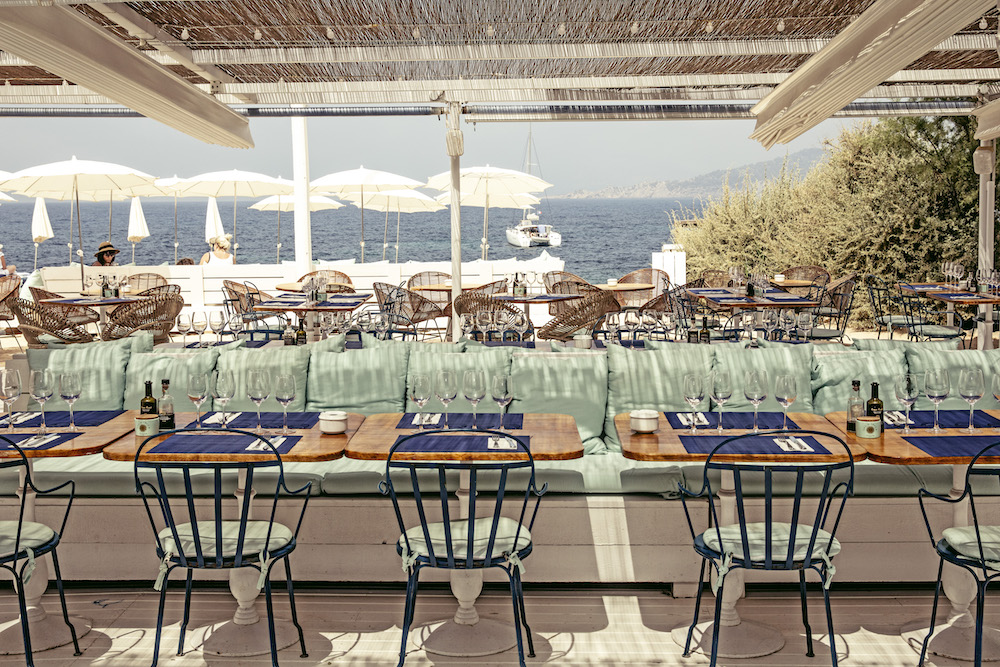 Meet the chill-out beach club with the best sharing food on the island. It’s the kind of place where you over-order so much tapas and starter plates for the table, you don’t quite make it to the mains. Think crispy baby squid, padron peppers, burrata, croquetas de jamon and patatas bravas – Spanish classics, but served in the most beautiful way. Word to the wise: every other table has a giant jug of the signature fizzy Sangria Royal (€44). Situated in a tranquil, undisturbed stretch of pristine shore near the Las Salinas salt reserve, Experimental echoes its setting with whitewashed wood, bamboo and oceanic-inspired blue linens and beach towels. Once the sun goes down, the music rises. 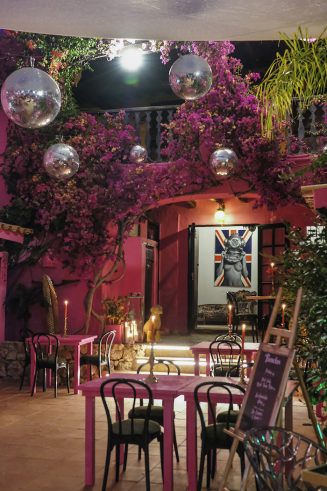 If Kate Moss was doing a girly dinner in Ibiza she’d probably head straight to Pamelas at Pikes. A major restaurant revamp for summer 2020 sees an explosion of vivid ‘Pamelas Pink’ on walls and tables, and glittering gold mirror balls hanging from the al fresco draped roof. The flamboyance of the décor is balanced with a pared-back chalkboard menu inspired by locally-sourced Mediterranean seasonal ingredients. Think dishes inspired by 70s classics with an eccentric British twist, like the Pamelas Carabinero prawn cocktail starter served in metallic goblet and signature Pamelas Burger topped off with truffled Welsh rarebit. Dinner is accompanied with a side serving of tunes from the poolside DJ. It’s the dinner equivalent of dancing in your (pink) seat. 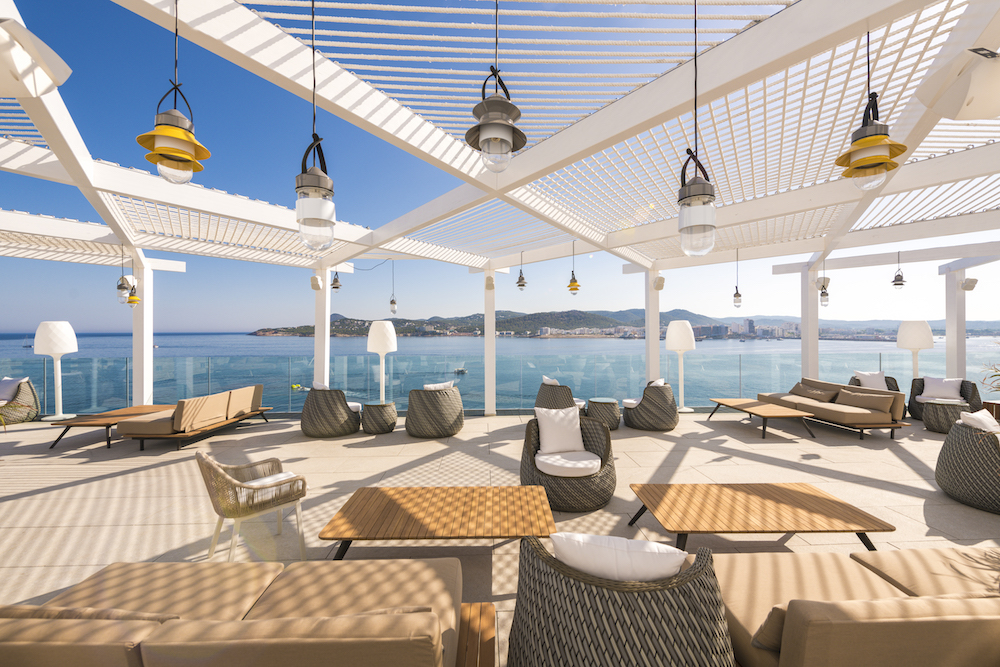 Sundowners – and finding the best sunset view/seats possible – has almost become a new Olympic sport in Ibiza. Hit the rooftop lift button for Belvue at Amàre Beach Hotel for their Sunset Ritual sessions – the live DJ set start at 7pm. One of the best spots to catch the Ibizan sunset from a height with its 360-degree views, the afterglow goes on and on leaving more time to discover the signature cocktail list that’s curated by bartender-in-demand, Diego Cabrera. For a heady twist on the Aperol Spritz, cool down on balmy evenings with the Frozen Amàre, which contains Aperol, Campari, gin, lemongrass and tonic. Set in a restored Ibizan finca in the heart of Ibiza’s countryside between Santa Gertrudis and San Miguel, Aubergine is about as rustic as it gets when it comes to farm-to-table foodie experiences. The organic menu features fruit, vegetables and herbs grown in the rambling gardens surrounding the al fresco courtyard, or produce from local Ibiza farms. Served on vintage-look decorative plates, wholesome standout signatures include the roasted aubergine carpaccio with cherry tomatoes, feta and pomegranate, and homemade mushroom and leek lasagne. Surrounded by lights dotted in the trees, mosaic table tops and accents of olive green running throughout the restaurant, it’s like eating in an Ibizan fairytale.

If you’ve OD-d on Spanish tapas, head for a little slice of Italy in Santa Gertrudis. Bottega il Buco in Ibiza is the third restaurant to be launched by Donna Lennard, owner of New York’s world-famous il Buco and il Buco Alimentari & Vineria. The concept sees Ibiza’s local ingredients combine with il Buco’s imported Italian staples, like the Sicilian ancient grain flour for focaccia making. Expect simple fish crudos and flavoursome pastas such as squid ink spaghetti, all served in an Instagrammable al fresco restaurant in the square of Santa Gertrudis.

Dubbed as ‘possibly the best sunset in Ibiza’ (and they’re not exaggerating), Sunset Ashram is one of the best spots on the island to experience the sunset. With ceremonial drums, it makes a nightly event feel like a spiritual awakening. It’s virtually impossible to get a front row seat for sunset without booking ahead (expect a surge 15 minutes before the sun starts to dip). The sundowner cocktail list sets the tone for magic hour – try the Mezcal Cala Conta in honour of the beach where Sunset Ashram hovers over. The beach bar sits on a rock that divides the Instagrammable beach in two.

Ibiza isn’t short of bohemian-style boutiques, but for the real deal, shop at Las Dalias Hippy Market. Held every Saturday during the year in the heart of San Carlos, it’s an explosion of colour, music and trinkets that you won’t be able to resist. Originally starting in 1985 with just five stalls, you’ll now find more than 300 stalls selling clothes, accessories and homeware to cram into your suitcase. During summer season you can shop by starlight at the Night Market – a more relaxed version of the Saturday market that runs on Mondays, Tuesday and Sundays from 7pm to 12.30am.

If there’s one place that’s worth switching your fringed sandals for hiking shoes in Ibiza, it’s the magnetic pull of Es Vedrà. The small, uninhabited island floats less than two miles off the west coast of Ibiza and is protected as a natural park. Emerging from the glittering Mediterranean sea like an offshore volcano, the best way to see it for the first time is a guided walk so you don’t get lost in the Ibiza heat. Walking Ibiza has regular group walks to Es Vedrà that follows a secret path and climbs to the highest point, 400m above sea level, to be rewarded with a beautiful sunset that overlooks the magical, rocky island. 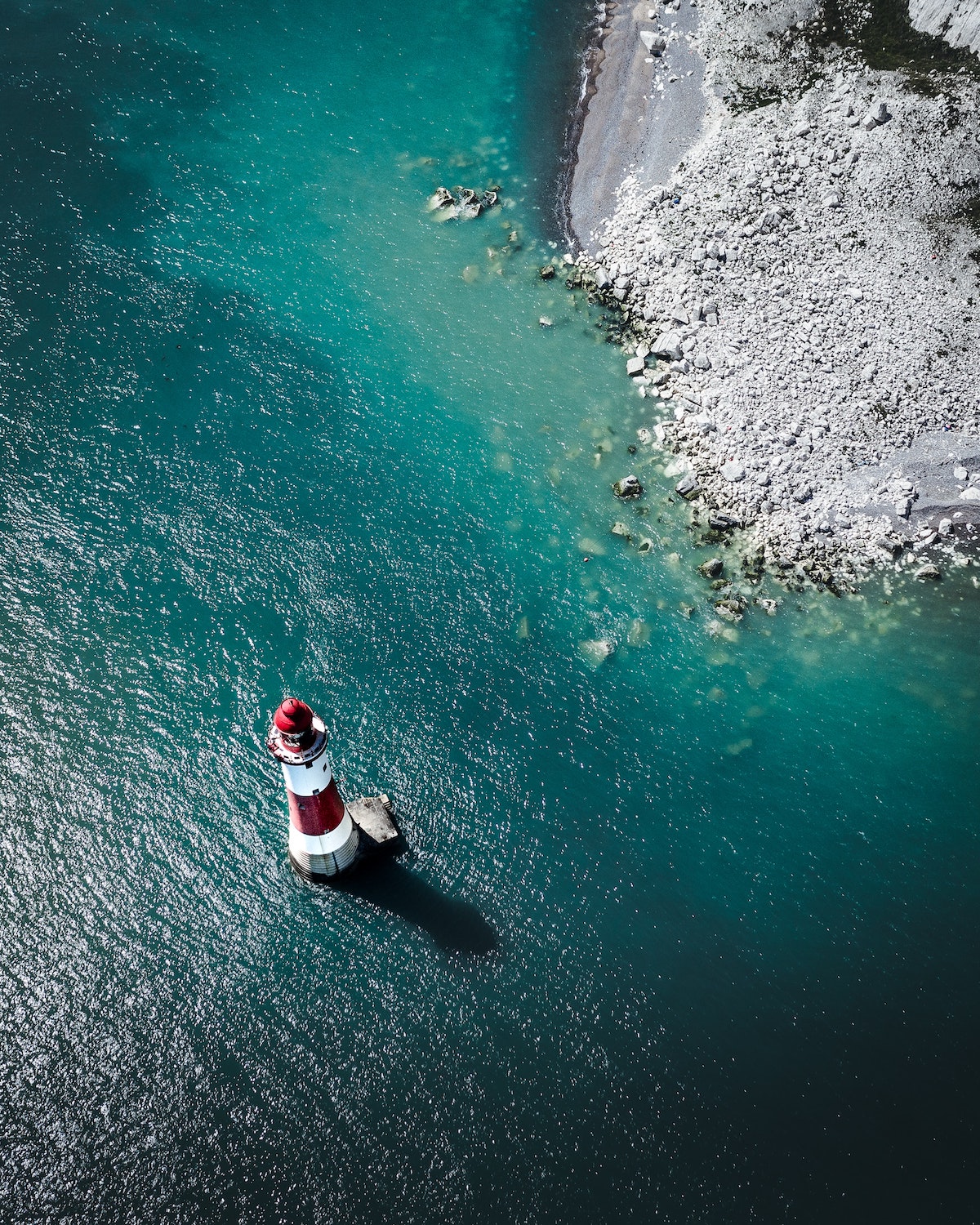