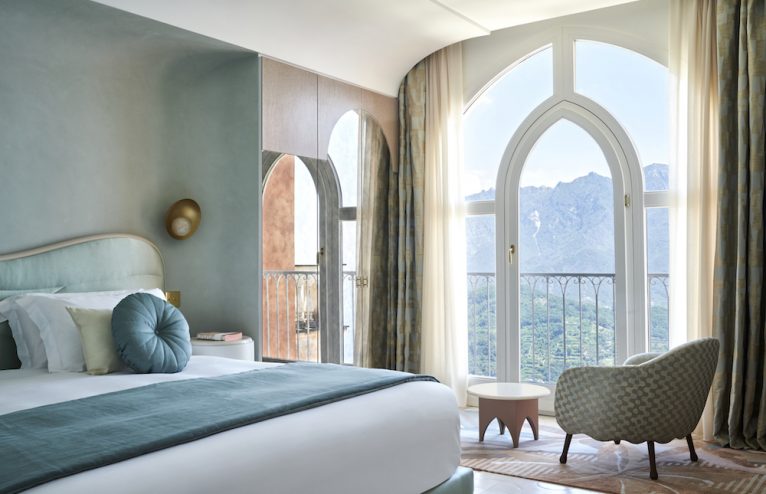 The etymological meaning behind Ravello is tricky to pinpoint. In my mind, it’s become associated by assonance with the verb to ‘unravel’ and, from experience of those dastardly hairpin turns, evokes the image of a ribbon unravelling. When you’re there in person, twisty passageways on slanted slopes replicate this same winding motion.

Then the time warp begins; a life of alfresco meals in the sun, espresso-fuelled hikes around the whitewashed villages and Aperol spritzes on the terrace with a view. In Ravello, there’s always a view.

The slow-paced life has always set Ravello apart from the surrounding towns. As opposed to Amalfi’s star-studded yachts, or Positano’s hedonistic portrait of la dolce vita, Ravello’s bourgeois glamour is more low-key. In the spirit of slow travel and trading crowded piazzas for heightened privacy, these are the quieter beaches and terraced trattorias that offer an outdoorsy stay in Southern Italy’s best kept secret.

a life of alfresco meals in the sun, espresso-fuelled hikes around the whitewashed villages and Aperol spritzes on the terrace with a view. In Ravello, there’s always a view.

Formerly a 12th-century noble villa turned literary abode turned movie star’s sanctuary, Palazzo Avino is a pink-hued palace that is stacked atop varying levels of a jagged slope 350 meters above sea level. In the 1950s, the property became a filming hotspot as much as a backdrop for romantic elopements and scandalous entanglements. A typical day might be spent by the 66-foot heated pool or at Clubhouse by the Sea, the property’s private beach located in the small town of Marmorata reachable by a 15-minute shuttle bus. 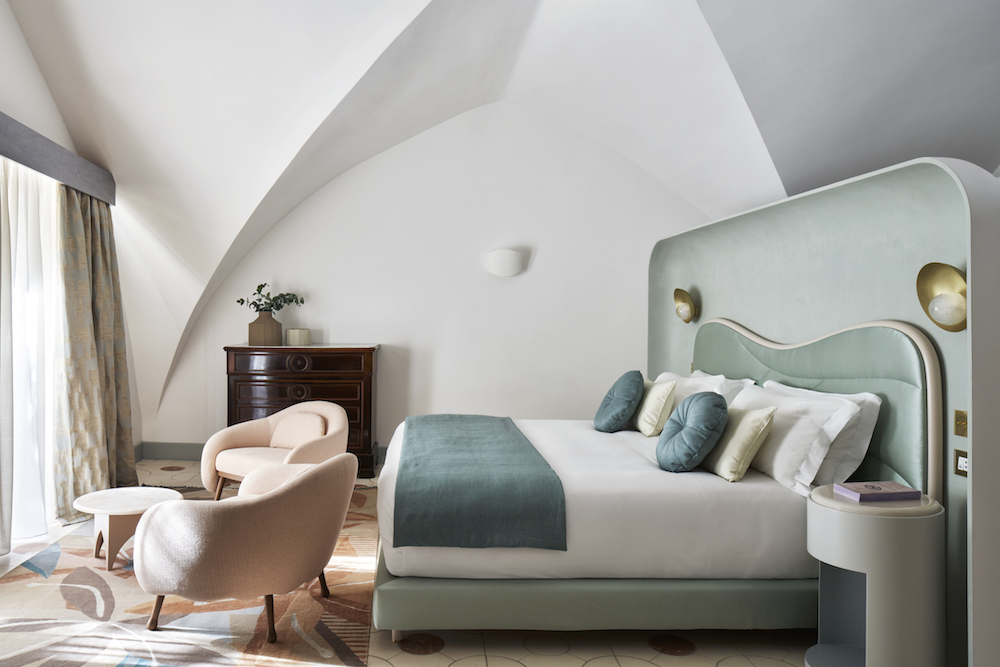 In a recent collaboration with Milan-based interior designer Cristina Celestino, bedrooms have a dream-like iridescence—most of the experience feels like a reverie coated in transparent pink cling film. Terracotta tiles and pastel-hued walls enhance a modern spin on design, though a soupçon of the former style still dominates in the main entrance hall and antique fabrics carefully handpicked by Mariella Avino of the Avino family. The open-air gym has a way of luring you in just in case a sunrise yoga session is on the agenda. 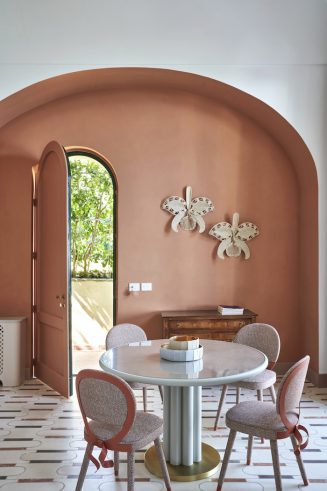 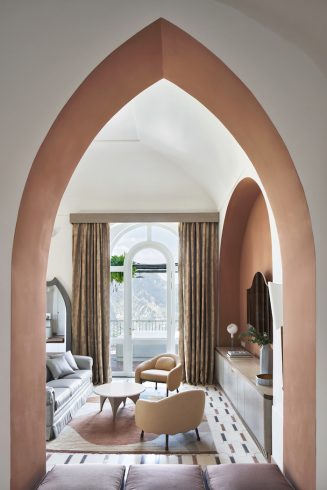 Rates start from £603 per night, including breakfast. 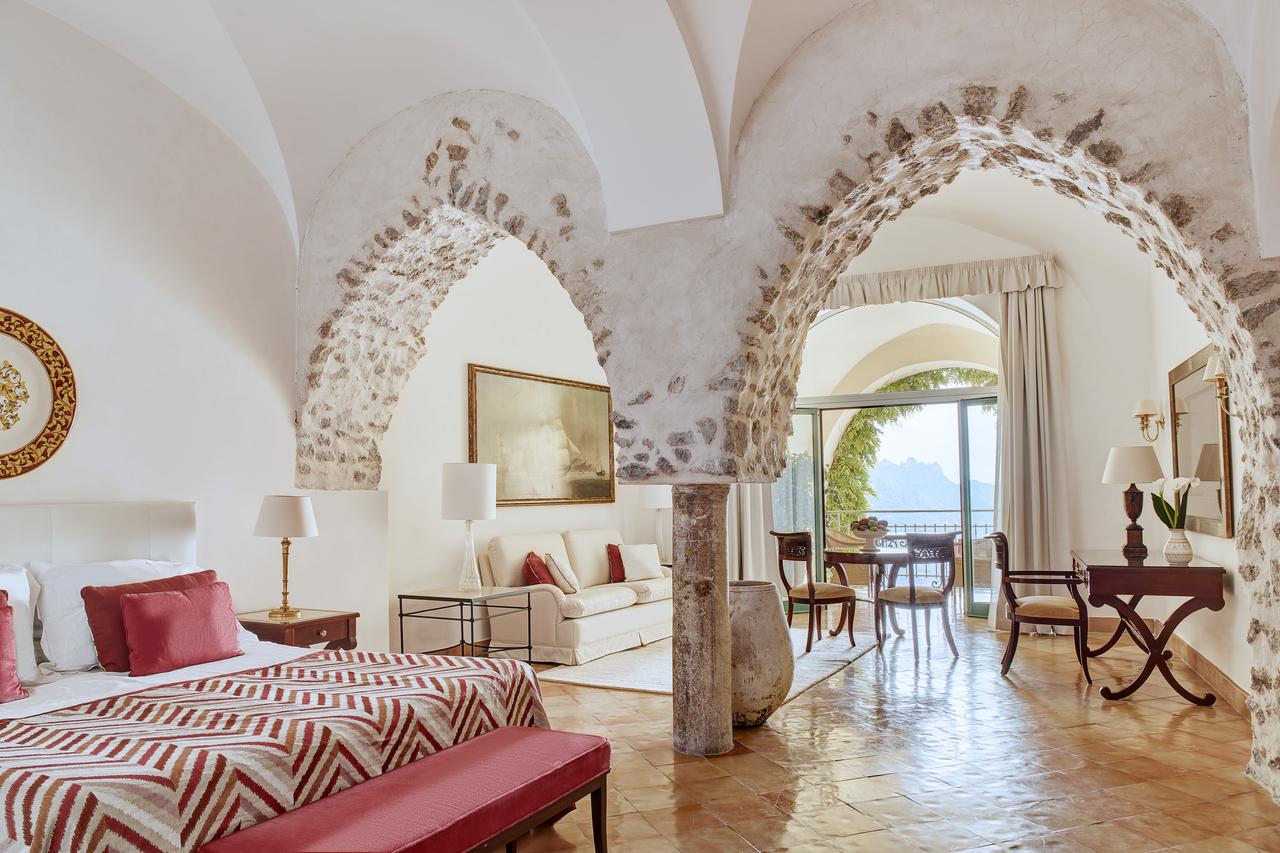 Tucked away in a quiet corner of Ravello among the terraced groves, this 11th-century palace is shrouded in Italian grandeur. Most of the 51 suites feature dramatic views of the sea, Neapolitan paintings and vine-clad balconies. There’s an infinity pool, to add to the glitz, that extends the gaze out to the sea and the craggy landscape in an endless blue mirage. Snag a seat at Loggiato Bar, an ultra-sleek pre-cocktail spot animated by the sky’s altering colours.

Rates start from £500 for a Double Room, including VAT and breakfast. 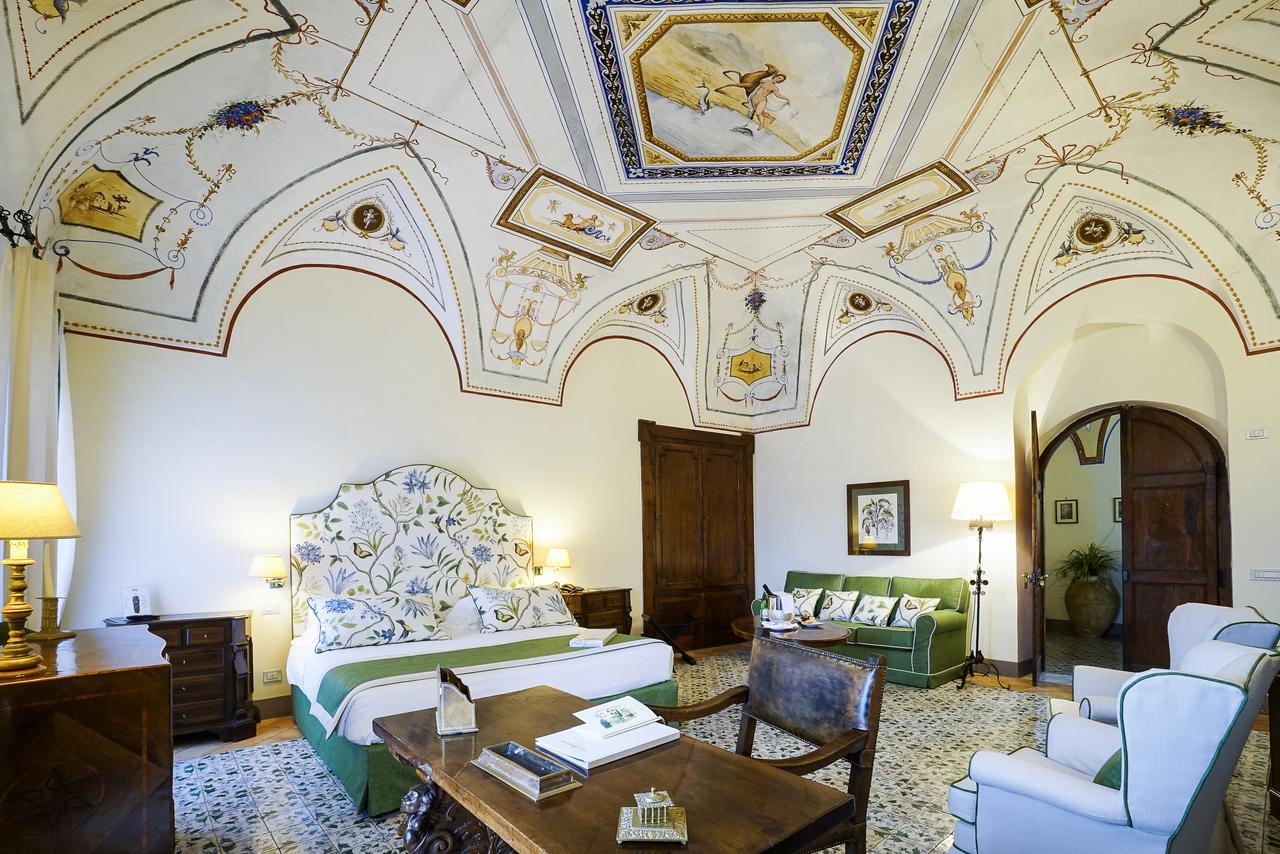 The route from the main square to Hotel Villa Cimbrone is animated with the scent of lemon groves and fresh tomato. The route is only accessible by foot and winds around the backstreets. The building has a modest exterior that enhances the beauty of the surrounding grounds suffused with the scent of fragrant rose and pine. The perfectly proportioned rooms are cosy in size and scale, with frescoed ceilings and mismatched antique furniture. There’s a gourmet restaurant right by the pool that serves refined Italian cuisine and a serious wine list.

Rates start from £450 for a Classic Room, including breakfast.

Where to eat and drink

For dinner, Michelin-starred Rossellinis focuses on creative Italian dishes and an intricate menu. The playful amuse bouche is composed of striking flavours that set the tone for an immersive meal. Tiny morsels of roasted red tuna, lemon scented cod fish and Neapolitan Ragu form part of the current menu, though this can change per the chef’s tastes. Regional wine pairings are carefully selected by the award-winning sommelier to match dishes such as creamy ravioli stuffed with wild rabbit. 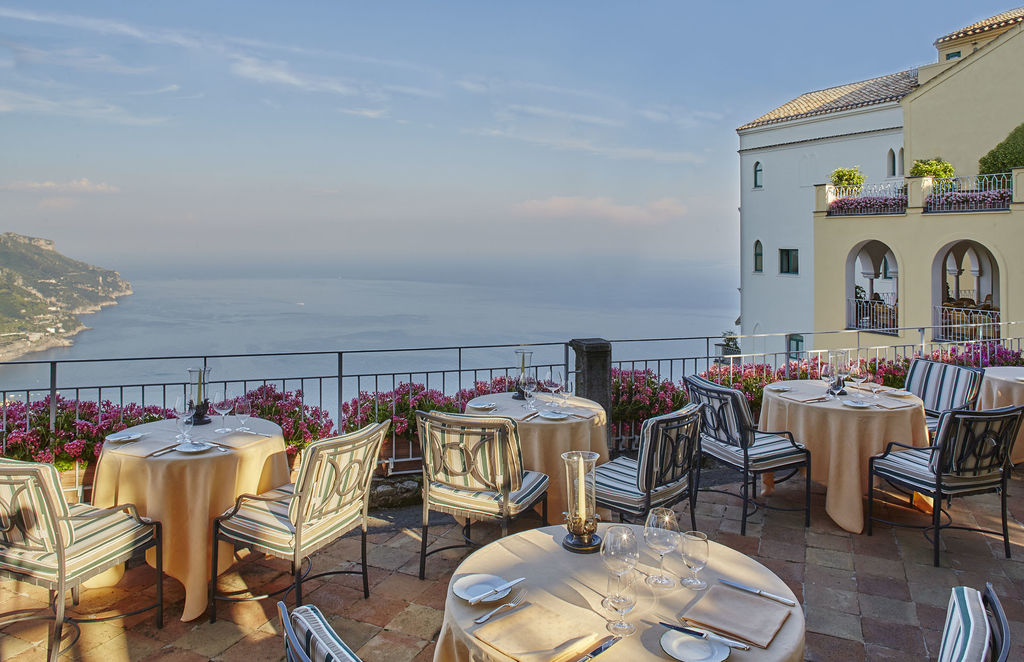 The Lobster and Martini bar at Palazzo Avino is just to the right on a cobbled terrace, where visitors can perch for a pre-dinner aperitivo. With over 100 different martini concoctions, chances are you’ll be here for a while…

Ideal for a romantic dinner date or a group extravaganza, Trattoria da Lorenzo’s outstretched terrace is a pretty spot for late summer evenings shaded by oversized trees and fairy lights. The walk from the main square takes 30 minutes along leafy paths, enough time to build up a hearty appetite before walking off a protruding pasta pouch post-meal.

The traditional fresh fish soup is an impressive and visually pleasing hot pot of clams and prawns served with chunky croutons and a squeeze of lemon. Speak to the owner, Lorenzo, for the freshest seafood options prepared that morning and any wine pairing suggestions he might have—though you can never go wrong with the unlabelled local wine.

A Funtanella is a subterranean bar off the main square carved within the indent of a cave. The rugged surroundings jut out in various directions and arch above the seating area, offering shelter in case of tropical rain that could pour at any moment. It’s predominantly frequented by locals who sit in mutual silence playing card games and old friends engrossed in a tête-à-tête.

Bottles of Falanghina, a crisp and fruity white wine with a hint of lemon from the Campania region are whisked around from one table to the next by the charming waitress who greets us with open arms and a familial demeanour. The soft lighting is a soothing addition to the natural surroundings and a nod to pastimes.

Parked on a narrow side street, Trattoria da Cumpa serves homely Italian dishes in a rustic setting. The oak-panelled walls offer an atmosphere of comfort and intimacy, like visiting a family member and sampling the local produce with a warm sense of familiarity. Expect a modest wine list and signature dishes that focus on the homegrown. All recipes are overseen by the ever so charming Netta Bottone who has carried on the family legacy at Trattoria da Cumpa for four generations. The tiramisu is an art form and should under no circumstances go unmissed with a flourish of the frosted limoncello to finish.

Hotel Villa Maria has a quaint restaurant terrace conveniently positioned between Villa Cimbrone and Villa Rufolo. A slow saunter from one to the other can be enough to work up an appetite from the steep alleyways so characteristic of Ravello. Guests come for the panoramic vistas and end up staying for the pillowy soft ravioli topped with organic tomatoes and pungent herbs.

Clubhouse by the sea

Palazzo Avino’s Clubhouse by the Sea is positioned on varying levels of the precipitous cliffs and dramatic coastlines, providing direct access to the water’s edge. Guests can order freshly made pizza on a juicy tomato base and Aperol spritzes straight to their sun loungers or dine in the laid-back restaurant up top.

Cycling isn’t really any option in Ravello but extended, slow strolls and hikes are doable. The walk from Ravello to the Amalfi coast is a scenic downward route that winds around the shaded passageways of Atrani, a local fishing village tucked between the divide of two soaring cliffs. The journey is all downhill and promises pistachio ice-cream pit-stops along the way. Advanced hikers might try the more challenging Walk of the Gods trail, a 7km path through abandoned villages and meandering meadows.

The Gardens of Villa Cimbrone 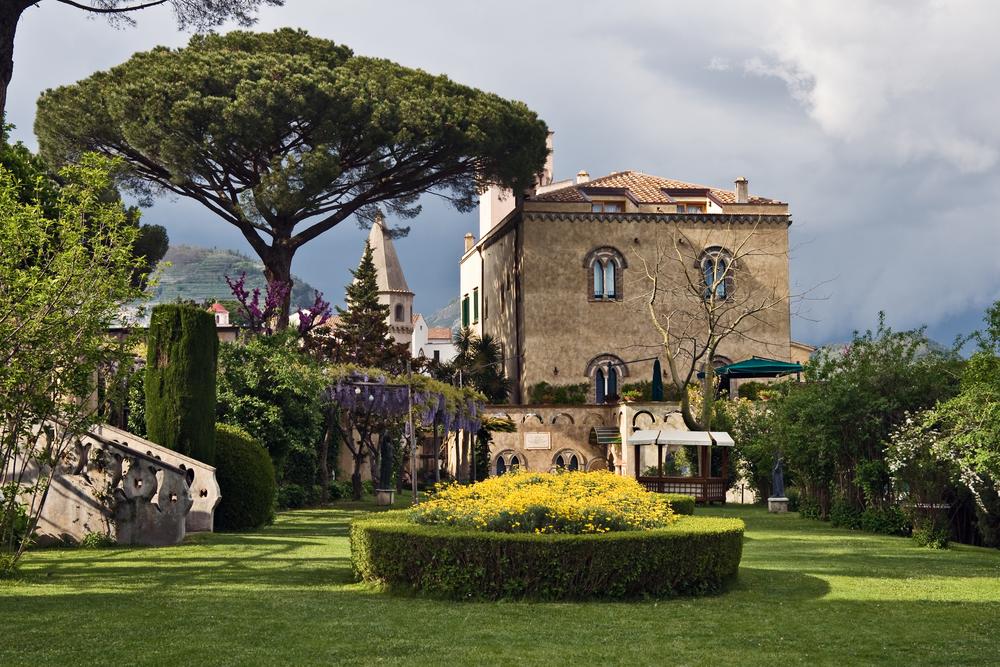 Ravello’s rugged terrain is softened by Villa Cimbrone’s landscaped grounds. It’s said that the strategic positioning and layout of the garden has something to do with the fecund green lawns fringed by rich and varied vegetation. Sixteenth-century doorways, gothic arches and imposing bronze statues of Greek warriors are scattered around the grounds, but it’s the Terrazza dell’Infinito (Terrace of Infinity), Ravello’s most spectacular panorama, that reels in the admirers.

Venturing out of Ravello for the night? Le Sirenuse’s Aldo’s in Positano is a speedy boat trip from the Amalfi and promises ultra-glamour. It’s a must-visit if the time permits for its opulent frescoed ceilings, Neapolitan Baroque artwork and a signature seafood menu. Think oysters and clams served on a decadent plateau and cocktails that resemble petal-garnished love potions—specifically the Passion Caipirinha.

The terrace feels like an extension of a grand Italian summer home in a nod to its former life. From Aldo’s, there’s a jaw-dropping view of colourful houses that appear to be tumbling down a hill, forming a squiggly line against the sky’s blank canvas.

In true Italian fashion, the entire process is about taking your time and indulging in a truly slow supper, starting with cocktails, buttery olives and alluringly moreish nibbles. The sea bass with lemons from Amalfi is strikingly distinct in texture and the Espresso cups come with charming little hats on them to retain the heat. Book a table for sunset and witness the entire restaurant terrace and sky transform into a lucid pink hue. 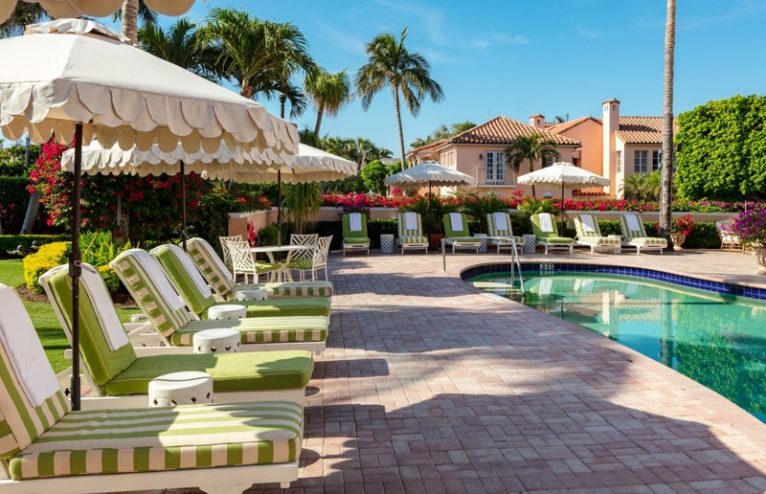 The CF Guide To Slow Travel In Tuscany