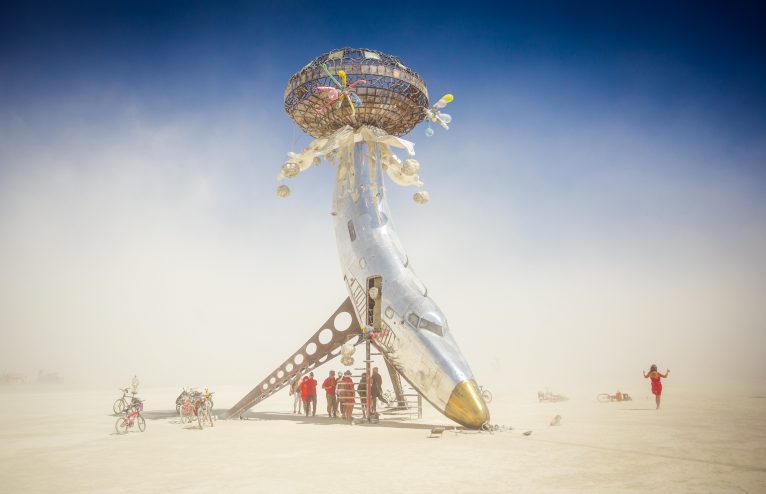 A group show curated by celebrated Irish fashion designer, Simone Rocha, girls girls girls opens at Lismore Castle Arts on 2 April 2022 (mark it in your iCals). As a designer with deep connections to artists, Rocha has chosen to centre this exhibition on female practices. Exploring the female gaze from multiple viewpoints, girls girls girls “draws a thread from celebrated artists such as Cindy Sherman and Roni Horn to a younger generation of artists including Sophie Barber, Luo Yang, and Genieve Figgis”.

Radical Horizons: The Art of Burning Man at Chatsworth is a large-scale, multi-media exhibition comprising of 12 monumental sculptures (eight existing sculptures and four works built on site). Presented in the park surrounding Chatsworth, the exhibition is a celebration of art from “Burning Man, the legendary annual coming-together of artists in Nevada’s Black Rock Desert, featuring dramatic, vibrant sculptures and structures”. Introduced by Sotheby’s, Chatsworth House worked with the Burning Man team and artists to bring its distinctive culture of creativity, civic engagement, and collaboration to the Derbyshire landscape. The result; a wowing exhibition by all accounts.

‘How does Simone de Beauvoir’s 1949 book The Second Sex read today for an artist? And how does it affect the way we look at art made since the book was published?’ That’s the question being asked by group exhibition Seventy Years of the Second Sex. A Conversation between Works and Words. Presented at Limmatstrasse in Zurich, the exhibition is curated by Dr. Sophie Berrebi and “brings together works by Louise Bourgeois, Geta Brătescu, Eva Hesse, Roni Horn, Zoe Leonard, Lee Lozano, Annaïk Lou Pitteloud, Cindy Sherman, and Lorna Simpson”, which converse with Simone de Beauvoir’s ideas.

Exploring “the darker side of society” (in a humorous yet poignant and gritty manner), this new exhibition from artist Kottie Paloma is likely to draw quite the crowd to W1S this April/May. For a bit of an artist overview, Paloma is heavily inspired by cave paintings and other archetypal symbols, creating works which look to act as fossils of contemporary life. Tackling subjects such as politics and human behaviour, to unpick the failings of modern society, Paloma’s works can be quite confronting – their muddied colour reduction techniques evoke a primitiveness which can both beguile and at once unsettle the viewer.

Consisting of eleven disks created during a 2013 collaboration with the Sèvres Porcelain Manufactory in France (works never before shown publicly), this one-room installation by Giuseppe Penone offers viewers a crash course in the medium of porcelain. Made by hand, the disks in question involve a production process stretching over long periods of time. 10 of the disks feature the imprint of one of Penone’s fingers in black paint; the eleventh disk is a variation, rendered in gold. Bringing together a number of themes that run through the artist’s work, “most importantly, his relationship to nature and the mutable definition of sculpture”, for a quick study in Penone, catch Propagazioni the next time you along Madison Avenue.