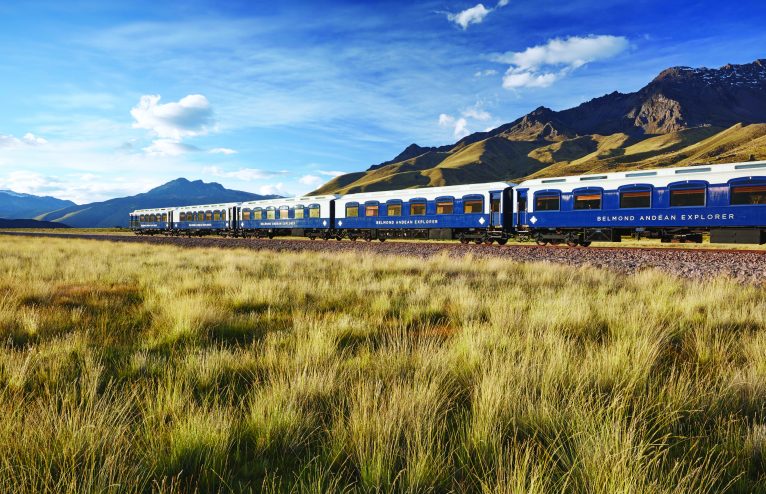 Could this be the dawn of a second Golden Age of train travel? With flight shame the latest dinner party topic and the woke traveller becoming conscious of their personal carbon footprint, the romantic elegance of replacing an internal flight with an epic train journey is a temptation hard to resist.

Whilst the view above the clouds can be magical, swap your air miles for cross country train miles and you’ll no doubt be rewarded with breathtaking scenery and an ever-changing landscape you would surely miss out on from up high. The Orient Express might be the gold standard of a bygone era, but we’ve dreamt up a list of our favourite train journeys for 2022 to take you across the globe in style. 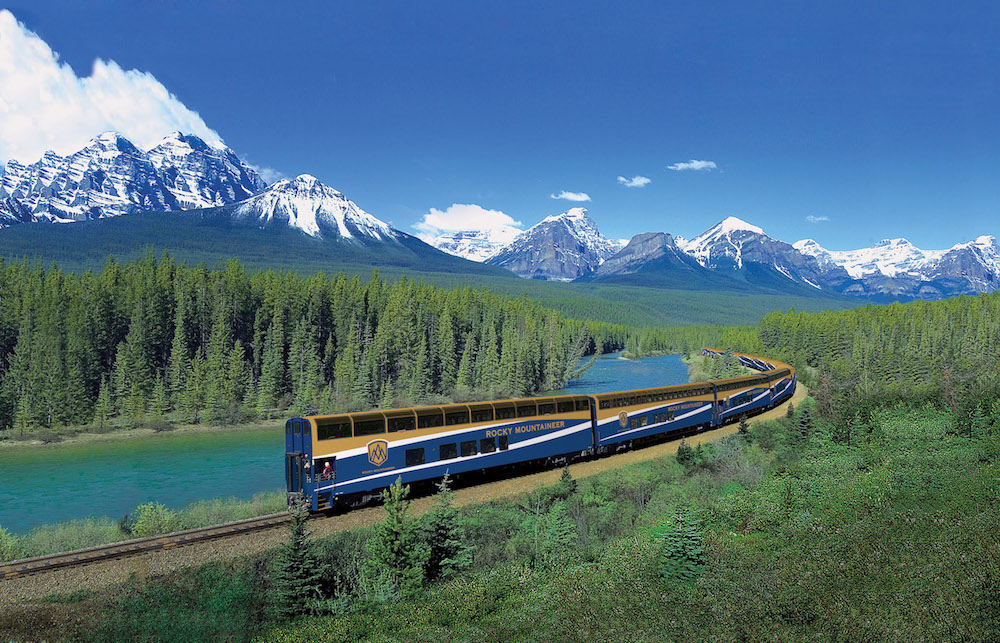 The Rocky Mountains have to be one of the most awe-inspiring landscapes in the world. Stretching some 3,000 miles from British Columbia and Alberta all the way to New Mexico, the Canadian Rockies conjure up postcard-perfect turquoise lakes, Alpine meadows, and snow-capped peaks. The Rocky Mountaineer’s glass-domed coaches offer unrivalled views, passing through the magnificent Banff and Jasper National Parks, and spotting Canadian wildlife in the shadow of such majestic peaks. Maximise on your surrounds with train journeys by daylight and nights spent in local hotels along the route.

Great Rail offers a 14 day Canada & Rocky Mountaineer trip taking you from Vancouver to Toronto, priced at £4,895 per person. 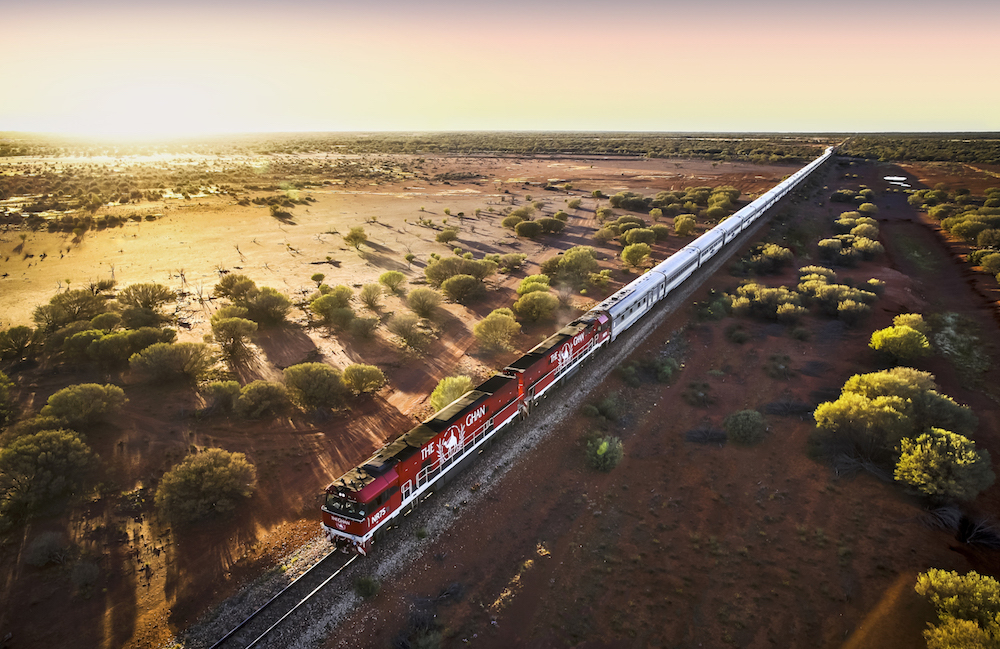 Australia’s legendary train cuts through the heart of the continent on an epic 47-hour journey through the outback, covering nearly 3,000 kilometres from Adelaide to Alice Springs and Darwin. Sleeper cabins feature a lounge that transforms into sleeping berths and a compact private en suite – for the ultimate in comfort, the Platinum Service offers an all-inclusive spacious private cabin. The journey will take you via some of Australia’s most magical sights, including an excursion to Uluru and the opportunity to dine beneath a canopy of stars at an authentic Outback Barbecue dinner at the historic Telegraph Station, with live Australian music.

Freedom Destinations run a four day/three night rail adventure on board The Ghan allowing for additional time in Katherine, Alice Springs, and Coober Pedy from £2,129. 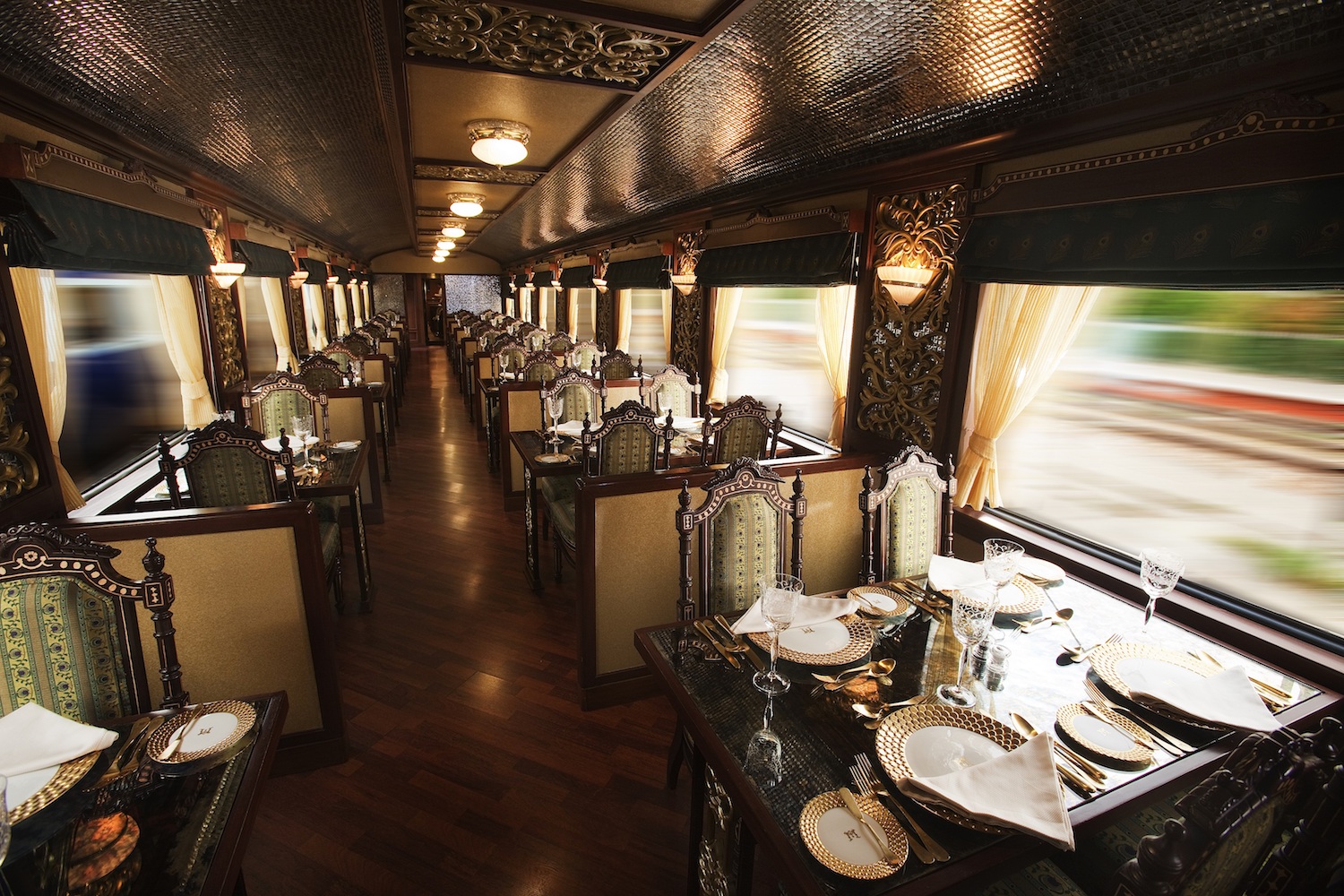 Embrace a journey from the past as you trundle through the dusty heat of India. The Maharajas’ Express has been blessed with the accolade of ‘World’s Leading Luxury Train’ at the World Travel Awards no less than five times and it’s easy to see why; the train affords guests the opportunity to explore several of the country’s much-fabled destinations as well as the hidden riches of this fascinating terroir.

The train is steeped in nostalgia, with 14 guest carriages – all named after precious stones from Here (diamond) to Pukhraj (sapphire) – housing rooms and suites adorned with rich tapestry, linen, and upholstery inspired by the personal carriages of the Maharajas. Routes take in India’s breathtaking temples and palaces, centuries-old Hindu monuments steeped in history, and, of course, the iconic Taj Mahal in all its glory.

Gane and Marshall offers a six-night Heritage of India itinerary, covering Mumbai to Delhi, via Udaipur, Jaipur, Ranthambore, and Agra from £5,125 per person, based on two people sharing. 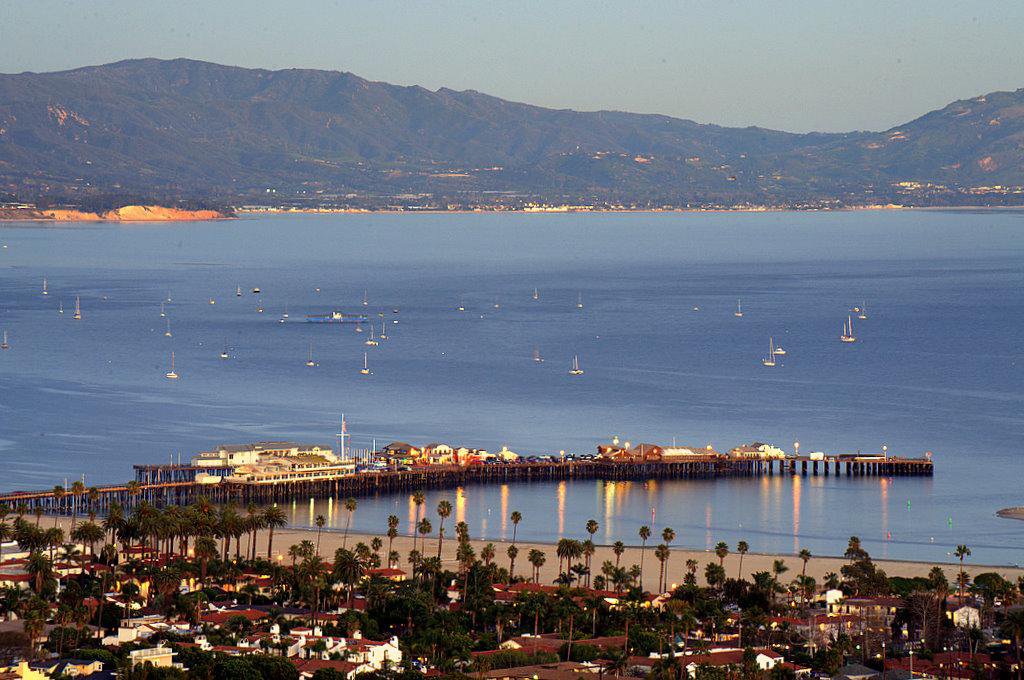 America may be known for its epic road trips, but with views from Amtrak’s West Coast service rivalling those in the movies you may be convinced to take to the rails for your next journey. It may not have the stars of the Orient Express or the old-school glamour of the Blue Train, but nonetheless what this journey may lack in luxury it more than makes up for in vistas.

The 36-hour route from Seattle to Los Angeles, via Portland, Sacramento, and Santa Barbara, takes in some of the most epic views in the US. Crossing through at least three bucket-list destinations, this is epic journey covers lush waterfalls, rugged coastlines, snowy mountain ranges, and the sun-kissed California coastline. Anyone who has seen the opening credits of Big Little Lies will bear witness to the glory of those sweeping Pacific views. It might take 36 hours, but it’s 36 hours of your life that will certainly be resigned to the memory book. 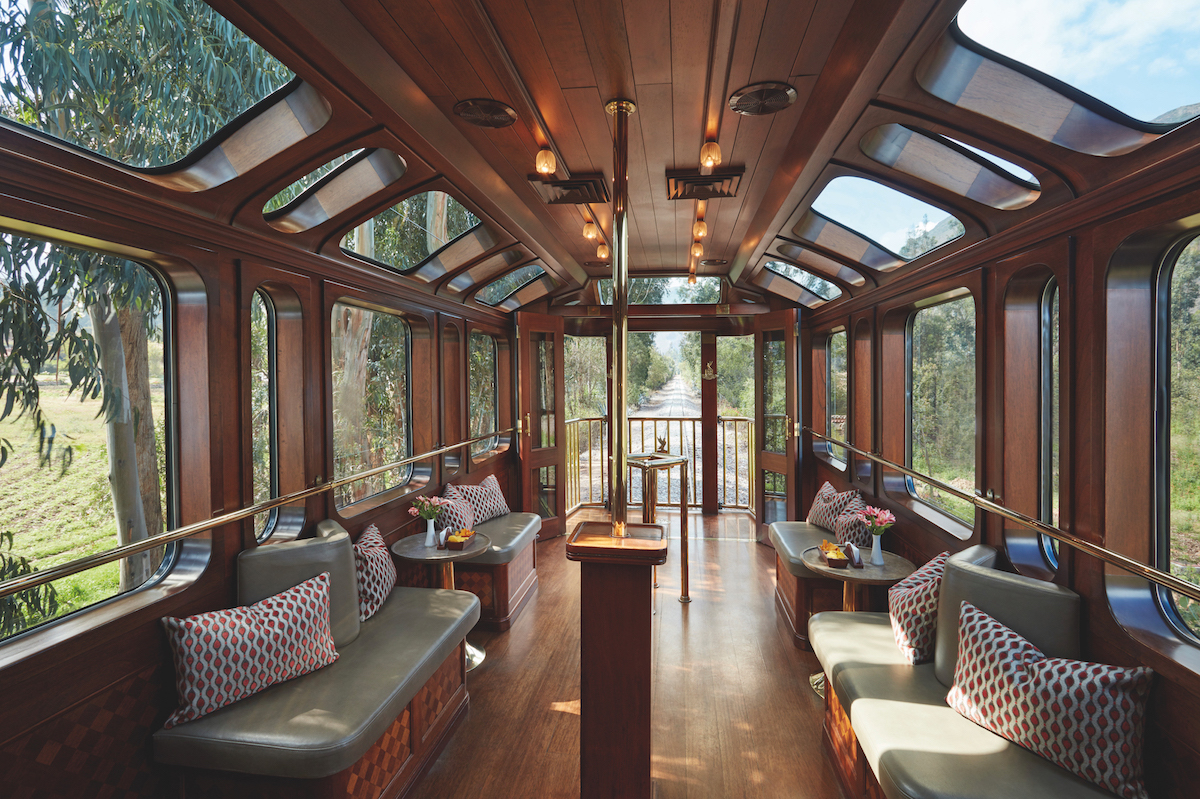 If you’ve ever dreamt of scaling the heights of Peru en route to the iconic Inca ruins of Macchu Pichu, but your daydreams had a rather stylish rendering, The Belmond Andean Explorer could be your train. Granted, it’s not the most wallet-friendly way of seeing the ancient ruins, but if your explorative style is more royalty than roughing it do read on.

Travelling along the highest rail route in the world, the first luxury sleeper train in South America is as stunning as the Andean plains it crosses. Indulge in a colourful menu of seasonal dishes with fresh, local ingredients; sip Pisco sours to the tinkling of ivory in the lounge car; or retreat to the spa car for a massage. Contrary to other Belmond trains, the Andean Explorer’s design is distinctly more modern, though no less luxurious, with vibrant colours and materials including textured leather and alpaca wool.

Last Frontiers’ 14-night Classic Peru itinerary includes two nights on the train between Cusco and Arequipa, starting from approx. £4,885 per person, based on two people travelling and sharing a cabin. 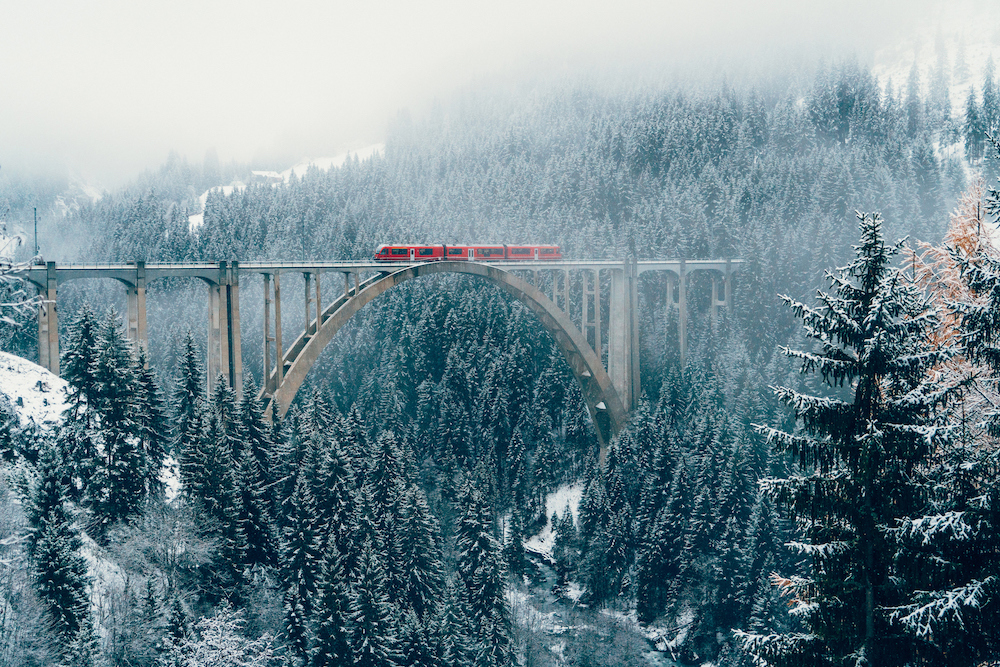 The newly launched Excellence Class is a throwback to the Golden Age of travel with passengers enjoying window seats, a five-course lunch of regional delicacies, and concierge services. Passengers will pass through the 2,033m high Oberalp Pass and over 291 bridges on an unforgettable eight-hour journey from Zermatt to St Moritz via Andermatt. The rail journey offers the rare opportunity to combine one of the most spectacular train journeys in the world with stopovers at some of the most iconic Swiss ski resorts.

Carrier offers a Glacier Express package as part of its other Switzerland itineraries. For more information call 0161 826 9871. 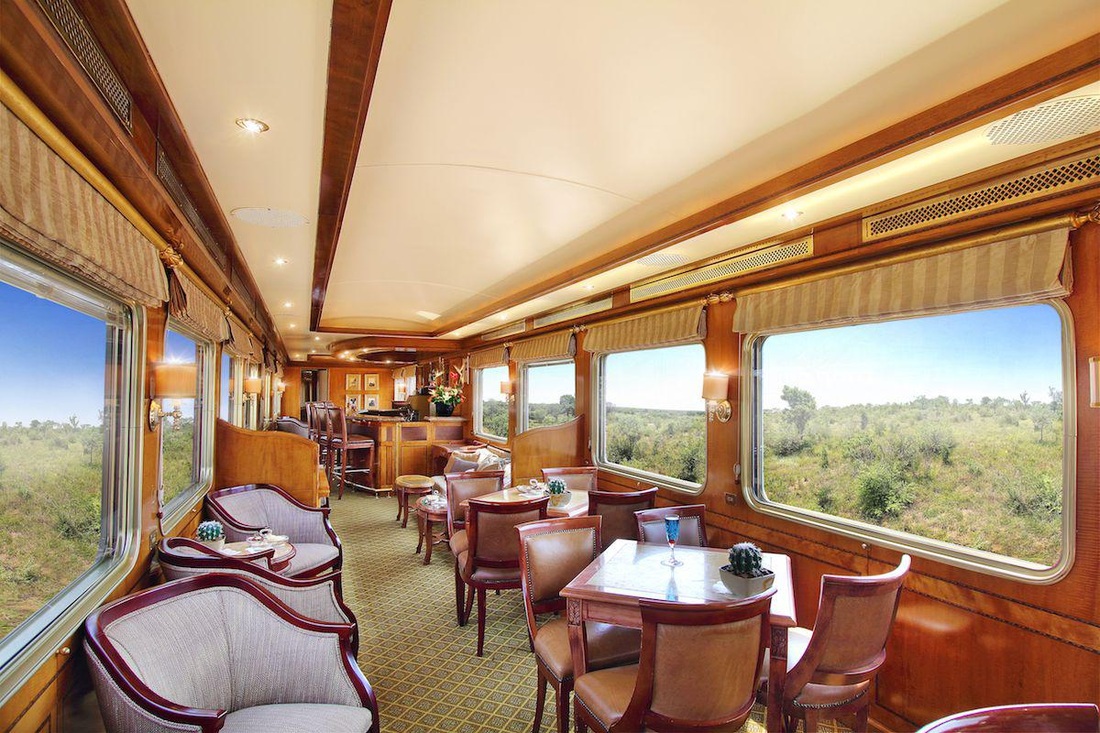 South Africa’s The Blue Train, linking Cape Town with Pretoria, invites guests to “surrender to the luxury of slow travel” with a two-night experience taking in some of the Rainbow Nation’s most spectacular scenery, from the verdant Cape winelands to the Karoo desert.

A step back to a bygone era, guests will relish dressing up for dinner in the luxurious dining car, complete with butler service in their private suite. Keen to take in a safari? The Blue Train offer a round-trip safari package, departing from Pretoria and journeying to the Kruger National Park for a dawn game drive, before heading back to Pretoria after nightfall.

Freedom Destinations offers a two night The Blue Train Escape from Cape Town to Kruger, including three nights in Cape Town, game drives, and a stay in Pretoria, from £3,435 per person.

Saving perhaps the most epic rail journey of them all for our grand finale, the Trans-Siberian route from Moscow to Beijing is not for the faint-hearted; this is a train journey like no other.

Trains have travelled this route for a century, soaring past the Gobi Desert, Lake Baikal, and historic towns like Yekaterinburg; there really is nothing like it. Crossing near enough to a third of the globe, you’ll experience myriad cultures, ever-changing landscapes, and incredible architecture from Russian palaces to the tents of Mongolia, and finally the hutongs of Beijing. At one end of the scale are domestic trains, full of fascinating characters getting from A to B. At the other is the Golden Eagle, a private train offering a different level of luxury. How to experience this mind-boggling route is up to you.

Regent Holidays offers several tours on the Trans-Siberian railway, starting from a 12-day Explore Moscow to Vladivostok Trans-Siberian Railway from £1,350 per person. The price includes train travel in a 2nd class four-berth compartment, excursions, and sightseeing as specified and transfers in Russia. 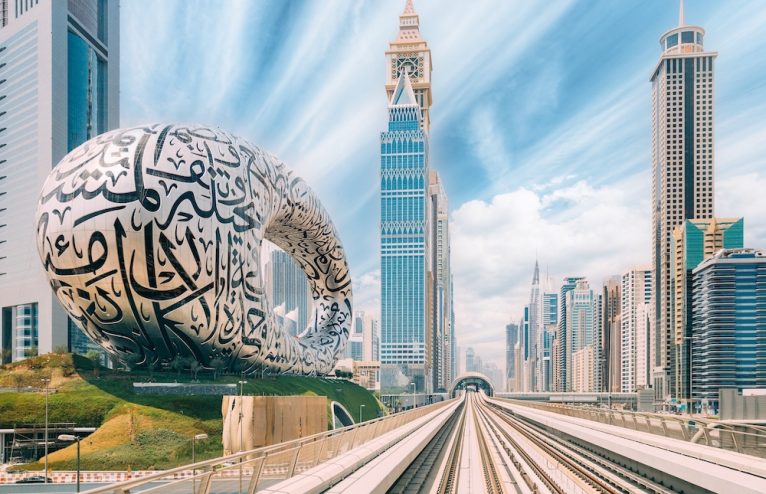