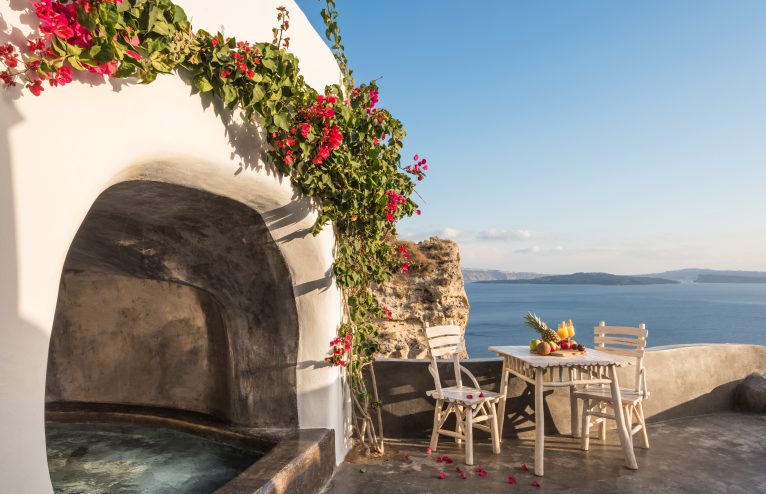 Centuries ago a volcanic eruption tore apart the Greek island of Santorini, creating a rugged crater with tall, steep cliffs on top of which balance a clutch of pretty villages. Oía is the one that’s most likely to appear on your Instagram feed with its whitewashed houses, blue-domed churches, narrow, winding pathways, and panoramic sunset views. It’s also the most glamorous destination on the island, packed full with Michelin-starred restaurants, designer shops, and luxury hotels. Sprawling down the cliff face just off the ‘marble street’, Oía Andronis Boutique Hotel is a stylish bolthole at the centre of everything.

From the reception, smooth stone steps, painted black to match the island’s volcanic sands, lead down past the suites and to the pool area, restaurant, and bar. The whole hotel is orientated out towards the ocean, creating a sense of calm expanse; the further you descend, the further you feel from the crush of tourists jostling through Oía’s streets.

There are four Andronis hotels on the island, each designed to have a distinct character. While Andronis Arcadia (located on the fringes of the village), channels a resort type vibe, Andronis Boutique Hotel feels slightly more urban. Music plays out from speakers around the pool while staff deliver cocktails to the sunbeds. 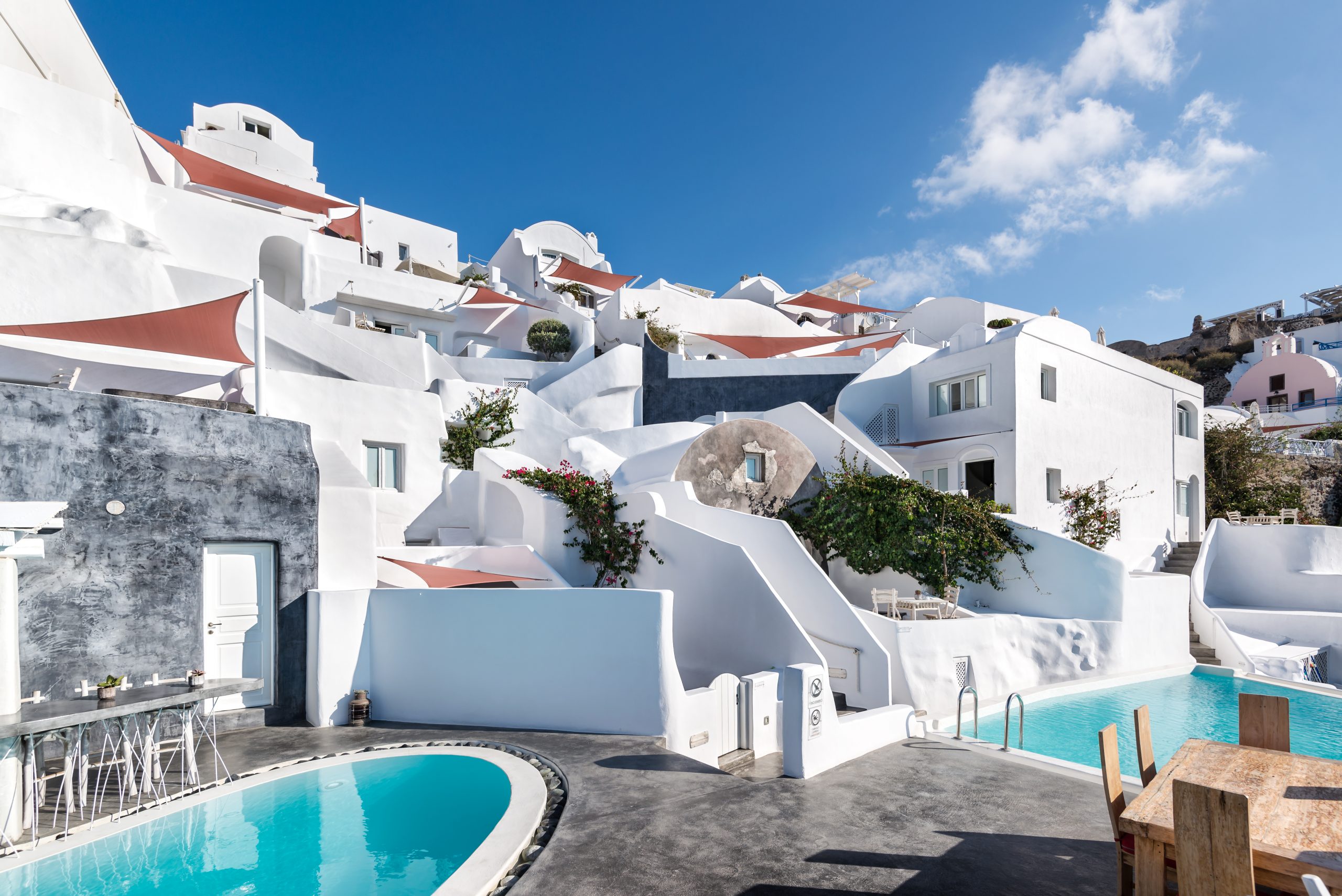 This is a suite-only hotel with rooms carved into the rock face. The staggered layout means that each room benefits from a private terrace area with sweeping views across the Aegean sea although this does come somewhat at the detriment of privacy. From our room – located on one of the higher levels – we were able to see, very clearly, into the terrace of almost every room beneath us. Interiors are minimal with polished dark stone floors and slate grey furnishings contrasting the white walls. Most suites boast a private pool of some variety – ours had a heated jacuzzi built into a mini cave.

Oía’s streets are pedestrianised with no transport (except donkeys) allowed. Cars can reach about 20m from the hotel where luggage is collected by the hotel’s elegantly dressed staff and delivered straight to the room. Service is attentive, but not intrusive. There’s always someone on hand if you’re in need of refreshment. 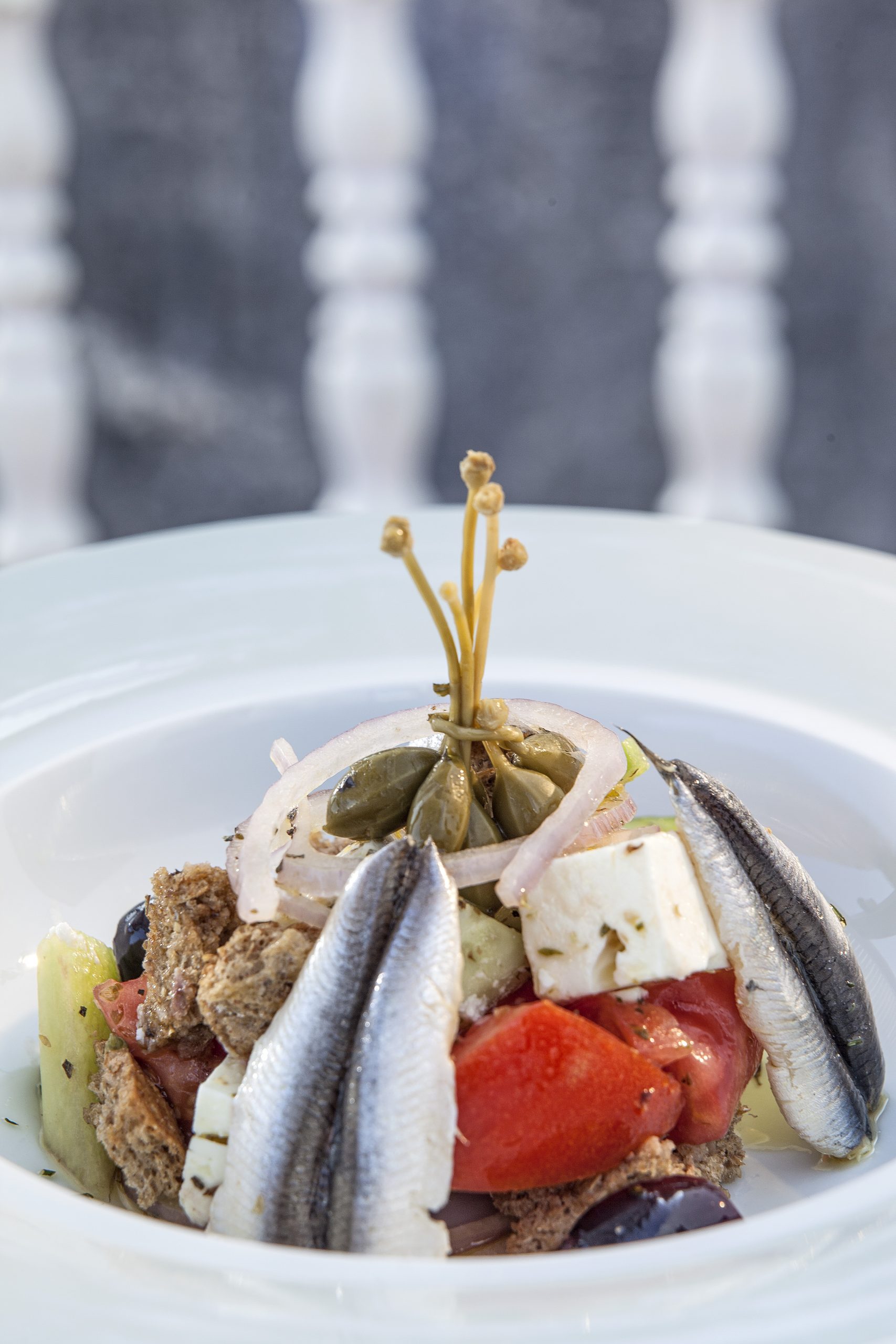 Breakfast is served at the hotel’s restaurant, Lauda, each morning with a buffet offering Greek specialties alongside fresh fruit, yogurts, pastries as well as a menu of eggs cooked various ways and coffee. The restaurant prides itself on using local produce and is overseen by three Michelin-starred consulting chef Emmanuel Renaul with a la carte or tasting menus for lunch and dinner. Guests can also make use of the restaurants at the other Andronis hotels. Stop by for lunch at Pacman sunset restaurant which offers the option of Japanese or Mediterranean menu, and then spend the afternoon lounging by the pool. Lycabettus at Andronis Luxury Suites makes a romantic spot for dinner, particularly if you can bag a table on the edge of the upper terrace with panoramic views of the sea. The nine-course degustation menu is the perfect way to try the best of the dishes (the red shrimp salad and lobster with scallops and zucchini are not to be missed). 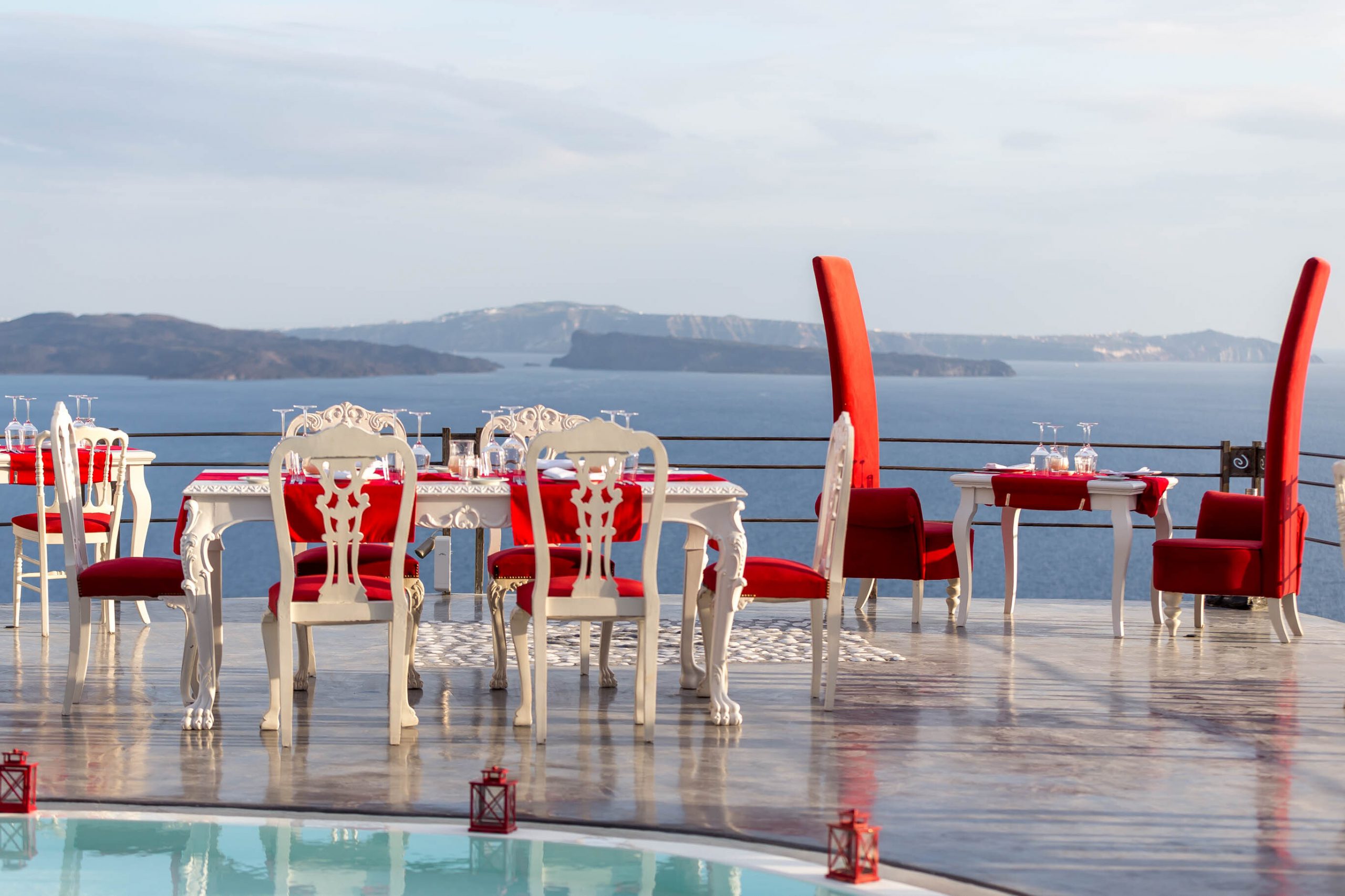 Fast-track your way into holiday mode by booking a treatment at Mare Sanus Spa (located a couple of minutes walk away at Andronis Luxury Suites). The ‘Sleep Easy Deep Tissue Massage’ is specifically designed to destress and relax the body, drawing on ancient Ayurvedic healing traditions. Then, hop on a boat to explore the surrounding islands (Andronis has its own yacht for charter) and swim in the warm, bubbling waters surrounding the volcano. On land, there’s a popular 10km hiking trail along the rim of the caldera (crater) to Santorini’s capital city Fira, which takes about foyr hours to complete and is a great way to see more of the island though make sure to set off early in the summer months to avoid the heat. For a change of scene, Ammoudi Bay (directly below Oía town) has a more laid-back vibe, some great swimming spots, and rustic taverna-style seafood restaurants. 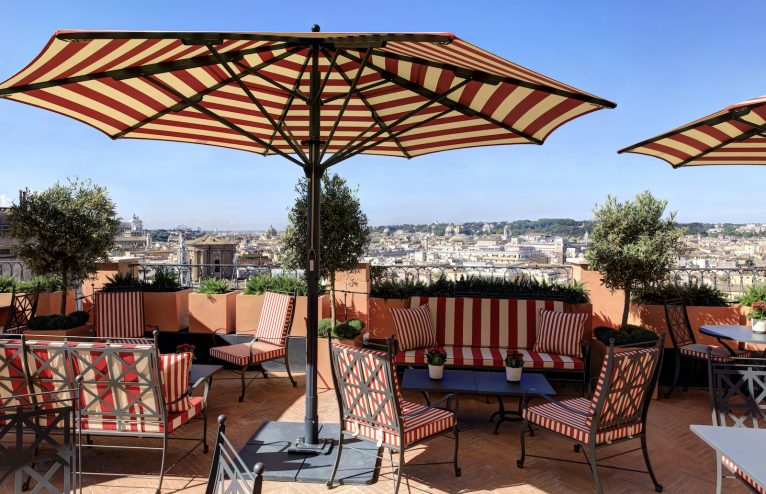 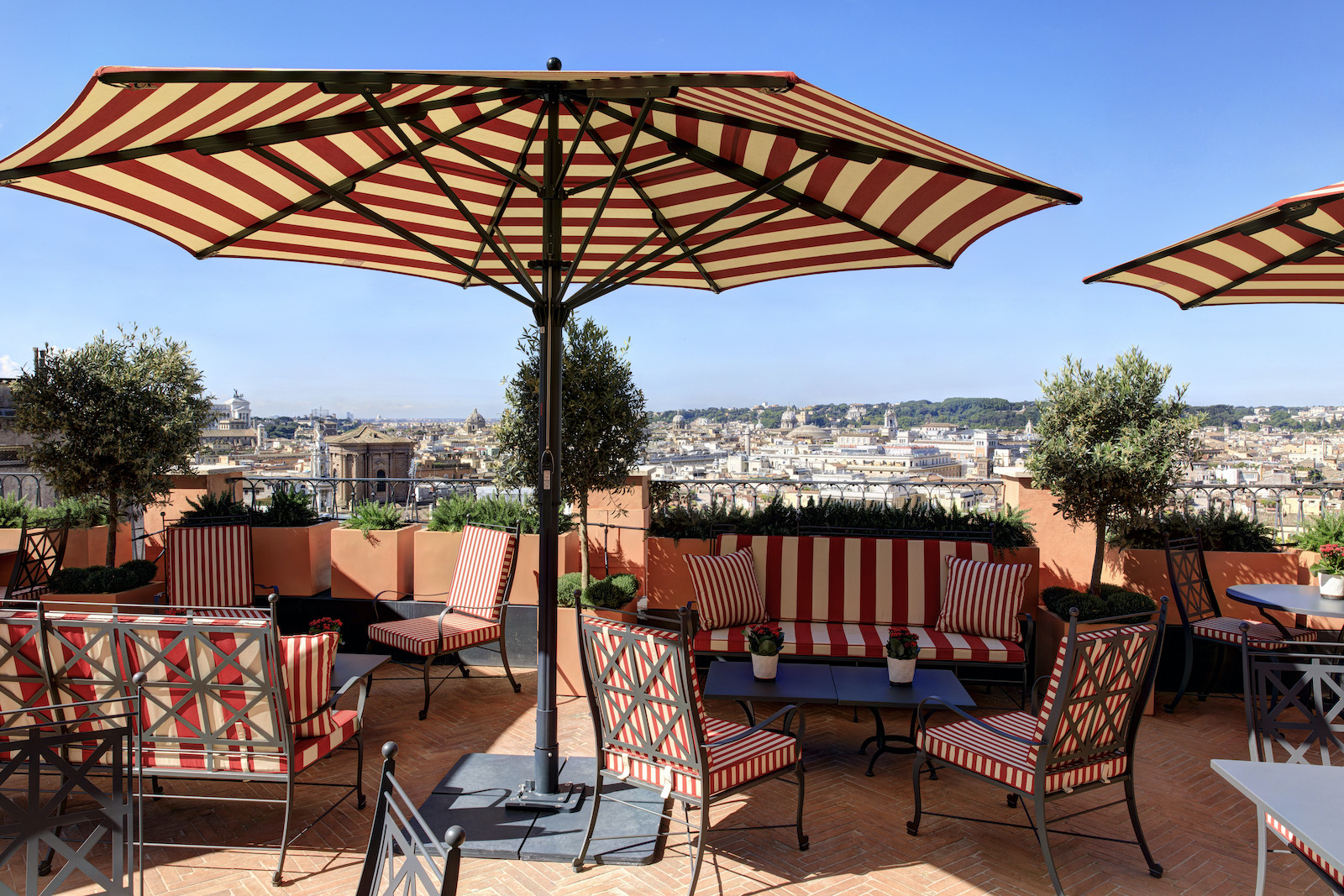