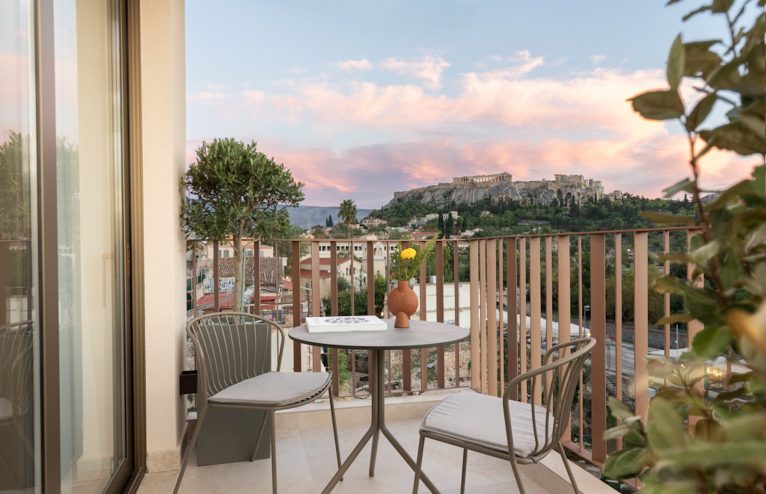 The Rise Of The Boutique Hotel In Athens, Greece

You can feel the cultural revival taking place in Athens today. This is a city oozing creativity from every corner, and hotels are no exception.

Culture and creativity show up in many ways, and in Athens it’s as evident on the city streets – many covered in artistic graffiti – as it is in the young Greek designers making a name for themselves. It’s in the trendy rooftop bars, overflowing with people clamouring for their Acropolis-view shot, and in the home-grown chefs opening artisanal restaurants. It’s in the hotels, too.

Hotels in the Greek capital have undergone a reinvention in recent years: no less than 18 new properties – offering almost 16,000 rooms – have opened their doors since January 2021, many of them buzzing in a boutique style to match their creative home.

And, where innovation takes place, the crowds will follow. No longer just an overnight stop en route to the islands, travellers are waking up to everything that Athens has to offer.

Here are 10 of the best boutique hotels in the city for your next visit: 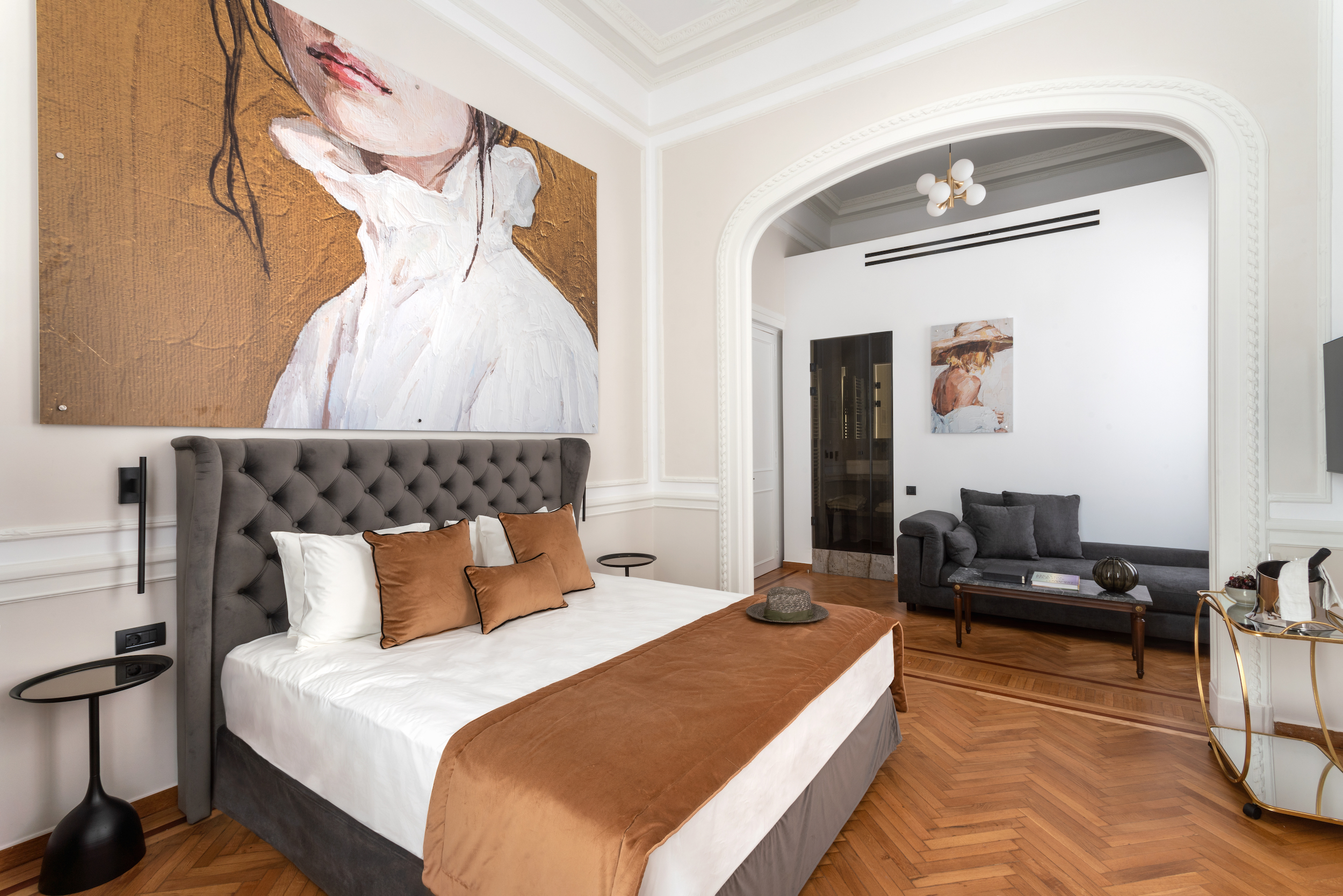 One of the newer debuts into the Athens’ boutique hotel scene, Athens Flair is something special. The building – former home to Greek actress, Ellie Lambeti – was designed in the 1880s by one of neoclassicism’s most celebrated architects, Theophil Edvard Freiherr von Hansena. A century later it was declared (and remains) a listed building. Inside, the lively history is brought to life throughout six bright and spacious suites which carefully expose original features, combining them with a modern, calming yet playful, decor. Visit the roof garden for a cocktail sunset; it’s the perfect place to take in the city’s history and perhaps, like Lambeti, channel the elegance of your inner Greek movie star. 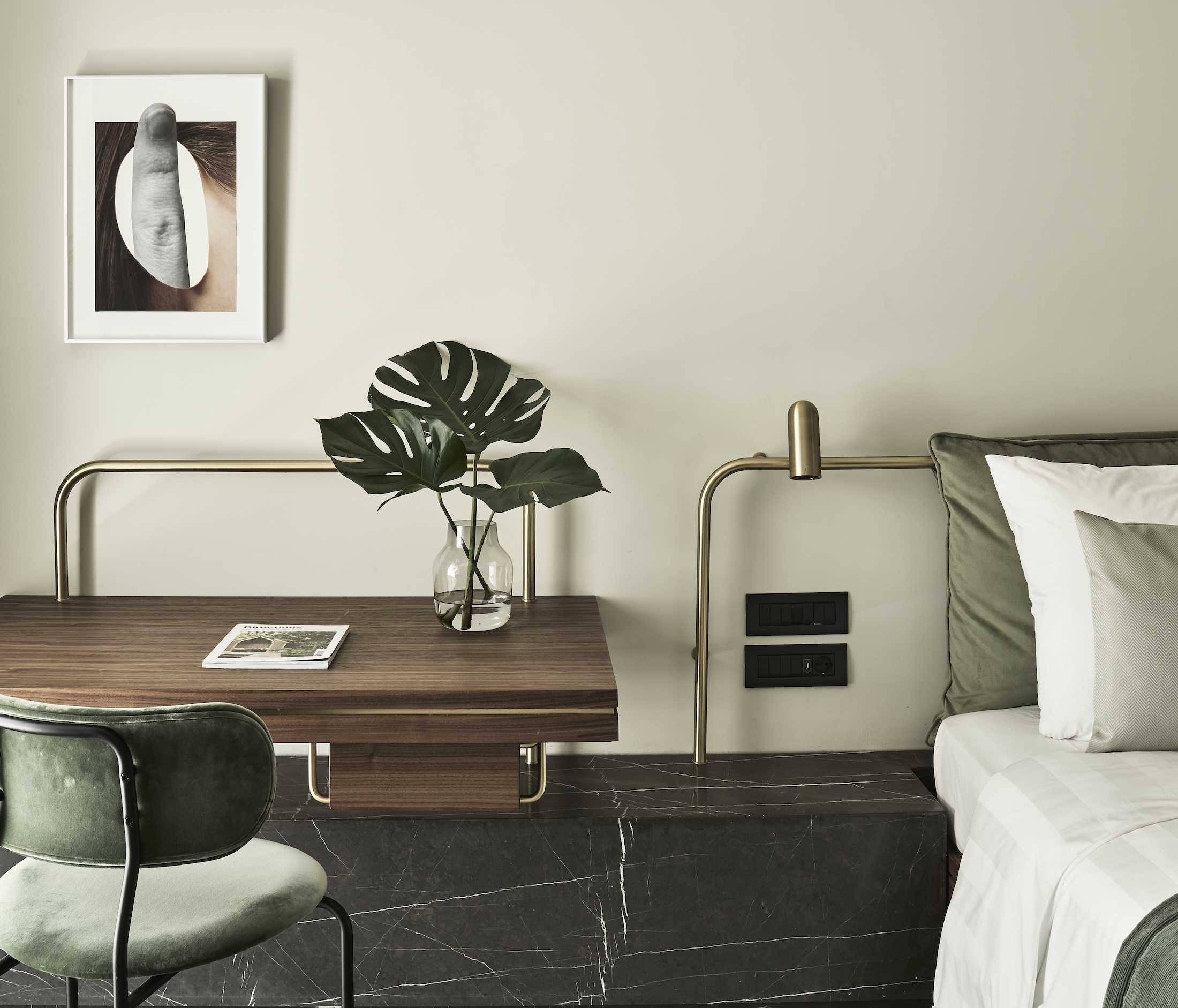 It’s hard to define the trendiest area of Athens, there are pockets all over the city. But if we were pushed, the few streets surrounding the Perianth Hotel would make the cut. Agia Irini, the square it calls home used to be the city’s flower-market hub (you can still find a few flower stalls nearby), and there are countless independent bars, restaurants, and unique design stores just a few minutes walk from the front door. This 1930s building was renovated by sought-after architects, K Studio, who delivered a unique style, merging dark mosaics and walnut woods with pastel pink furnishings and chalky-green walls. The attention to detail is evident throughout, and extends to their well-being centre, a non-profit teaching the practices of meditation, yoga, and martial arts.

Shila doesn’t believe that labels equal luxury, instead they focus on the sustainability of design; repurposing worn objects into something new and exposing the original features – such as marble sinks and terrazzo tiles – of its neoclassical building. That hasn’t stopped fashion giants Versace and Dior from dropping in to shoot campaign images, though. Each of the six suites here are unique, loaded with original art and inspired by ‘the imperfect charms of Athens’. We have no doubt you’ll fall in love with the unique bits and bobs carefully displayed throughout the hotel, and we have good news if you do: much of it is up for sale allowing you to enjoy it for a lifetime, not just a weekend. 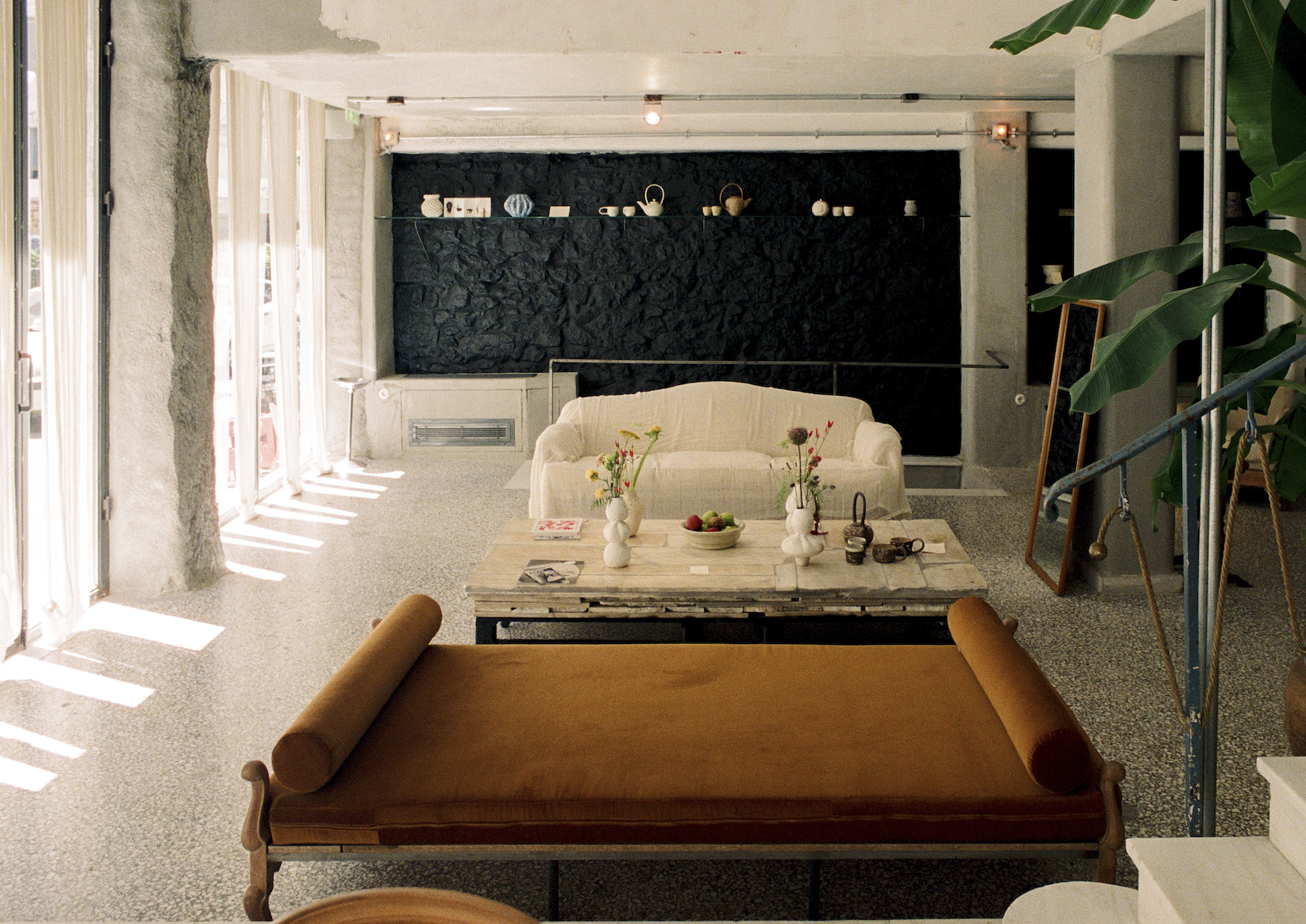 Expect a cool crowd at Mona, sister hotel of Shila and brought to life in 2022. Here, inside a former textile factory from the 50s, original design features shine through; from the marble exteriors and iron staircase to the exposed metals and stone that make up the building’s very core. The twenty bedrooms follow suit: bathed in natural light their minimalist yet sexy design features vintage lamps, objects dujour, and major cinematic vibes. Don’t miss the rooftop with sweeping views over the historic city – a wow moment any day of the week, but visit on Thursday when they host a members-only events that are open to guests. This is your chance to mingle with those entrenched in the Athens’ art scene. 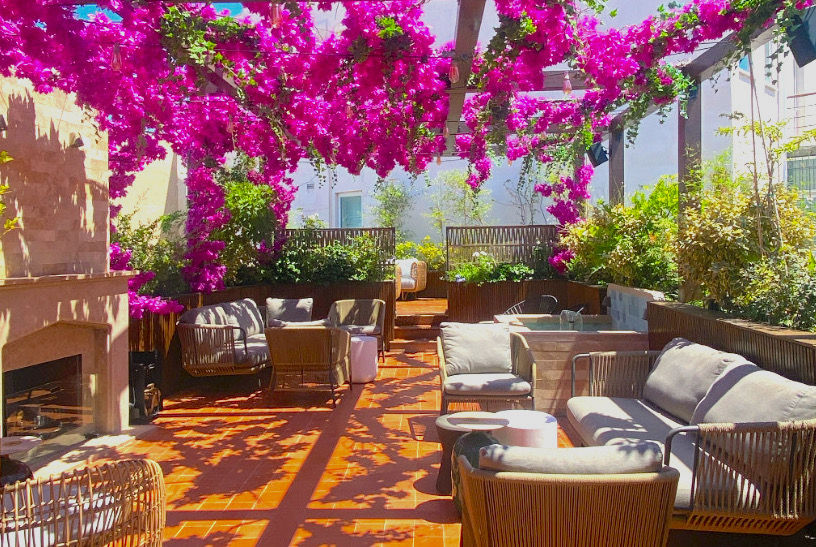 Like many places in Athens, Gatsby has a history. But perhaps not the one you’d expect. This art deco inspired hotel, close to all the central city sights, was once a police office and jail cells. Walking across the terrazzo-tiled lobby, flanked with decorative greenery, a retro bar occupying the back wall, it couldn’t feel further from its origins. A playful hotel, bedrooms combine pastel pink headboards with velvet furnishings, gold-tiled showers, and flirtatious art. Everything you’d expect from room service can be delivered, but there’s more. Each bedroom has a lion-shaped button on the wall and, while we wouldn’t want to ruin the surprise that pressing it offers, trust us when we tell you to do it. 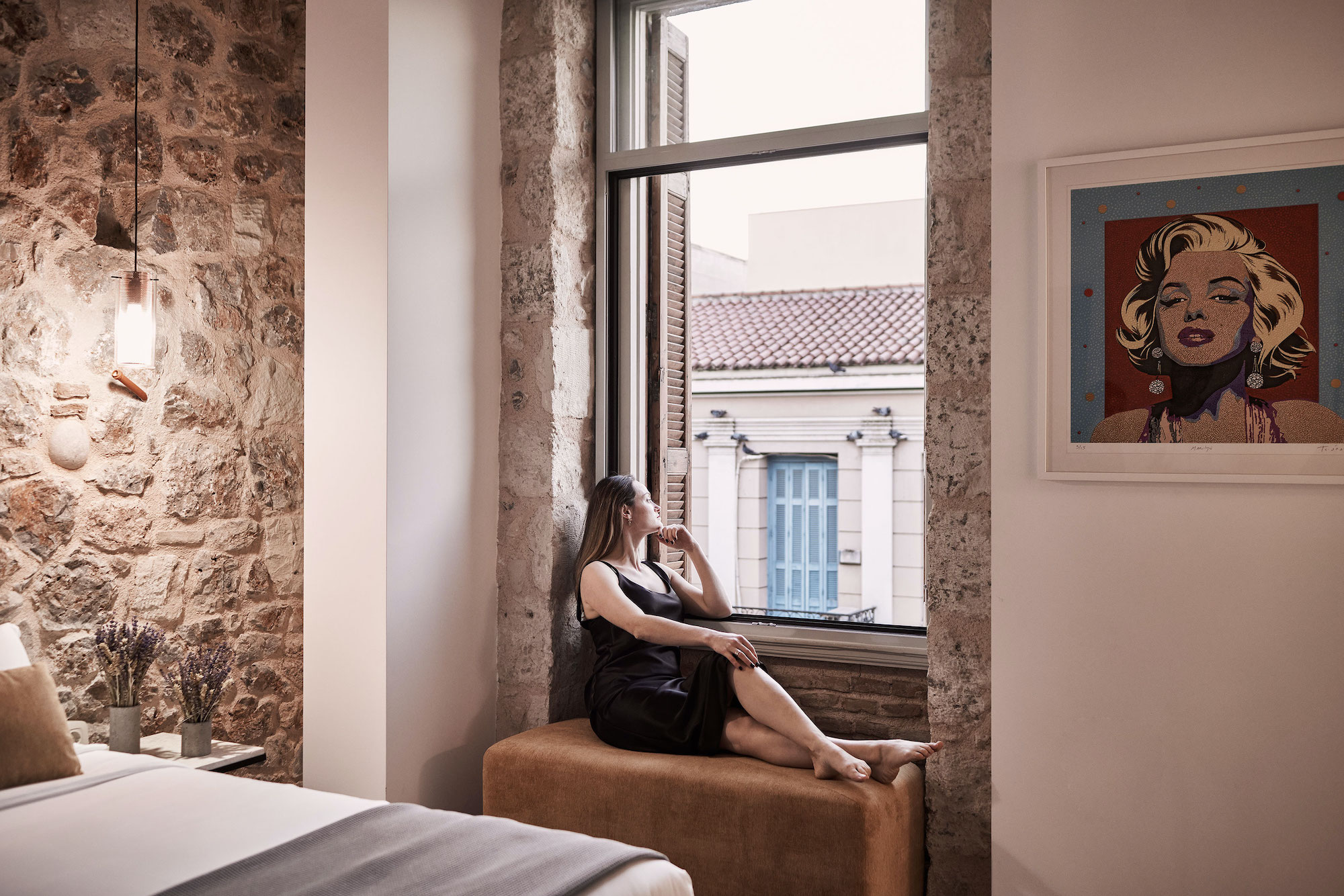 It seems every building in the Greek capital has a historic story to tell; Asomaton is no exception. It began life more than 100 years ago, as a wheel repair shop for horse carriages, soon transformed into a place to house its workers. It went on to become a glamorous townhouse until falling into disrepair, spending a few years abandoned and unloved. It’s recently reopened as a boutique hotel, new life injected into the three-story property and its 19 rooms. This is the kind of place that will charm you with faded yet ever-so-present glamour: modern pop art lines the original stone walls in the bedrooms, and open steel work exposes the central staircase. Follow it from bottom to top of the building, starting at the ground floor spa and making your way up to the rooftop for coffee or cocktails. Acropolis views as standard.

Rooms start from £78 per night. 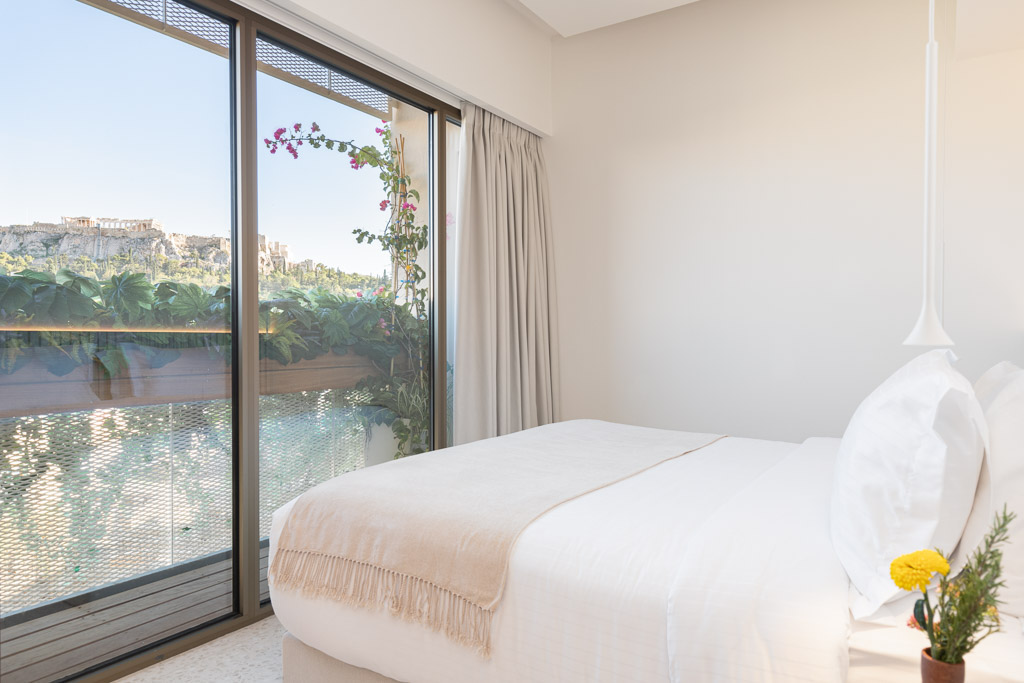 It’s only been open a month, but Altar Suites is already making waves. Occupying a prime spot in the city centre – somewhere between the Ancient Agora and the city’s animated shopping and nightlife scene – off-white tones and wooden floors in the bedrooms are complemented with pops of colour from the furnishings, fresh flowers, and statement walls. Finishes such as metal-cladded shelving and large, rainforest showers complete the space with modern style. From the views over the Acropolis to the polished and comfortable design, this is a welcoming, calming, and contemporary place to base yourself in the Greek capital. One that mirrors the spirit of the city it calls home. 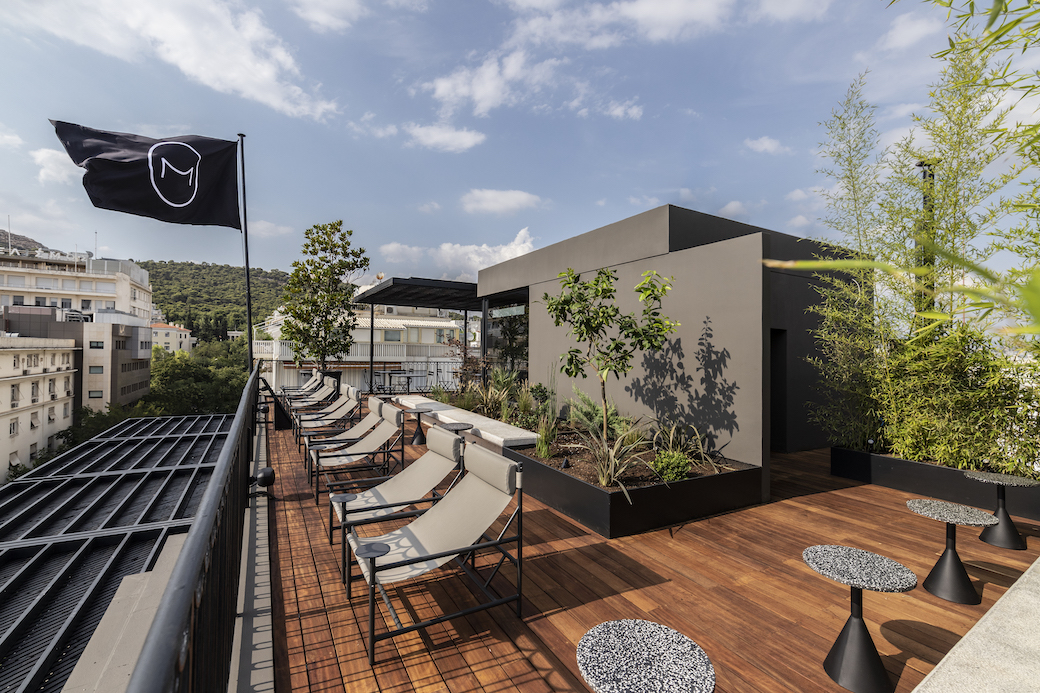 Handmade mugs from a local ceramic company set the tone for The Modernist, Athens – a space rooted in community. This Greek-owned property prides itself on its collaborations with local artists, extending from the ceramics to the DJ-curated lobby music, bathroom products (Physis Laboratory), and beyond. Sleek design – greys, marbles, and brass – fill social spaces as well as each of the 38 bedrooms, designated one of four categories (S, M, L and XL). All except S have outdoor space, but plump for the XL and you’ll be treated to a patio with outdoor jacuzzi and panoramic views of the city. While we’ll always advocate asking hotel staff for local recommendations, here – as yet another pillar of the hotel’s community-creating ethos – they really go above and beyond with their in-depth, personal knowledge of the city. Tell them your interests and be ready to explore some of the city’s little known neighbourhoods. 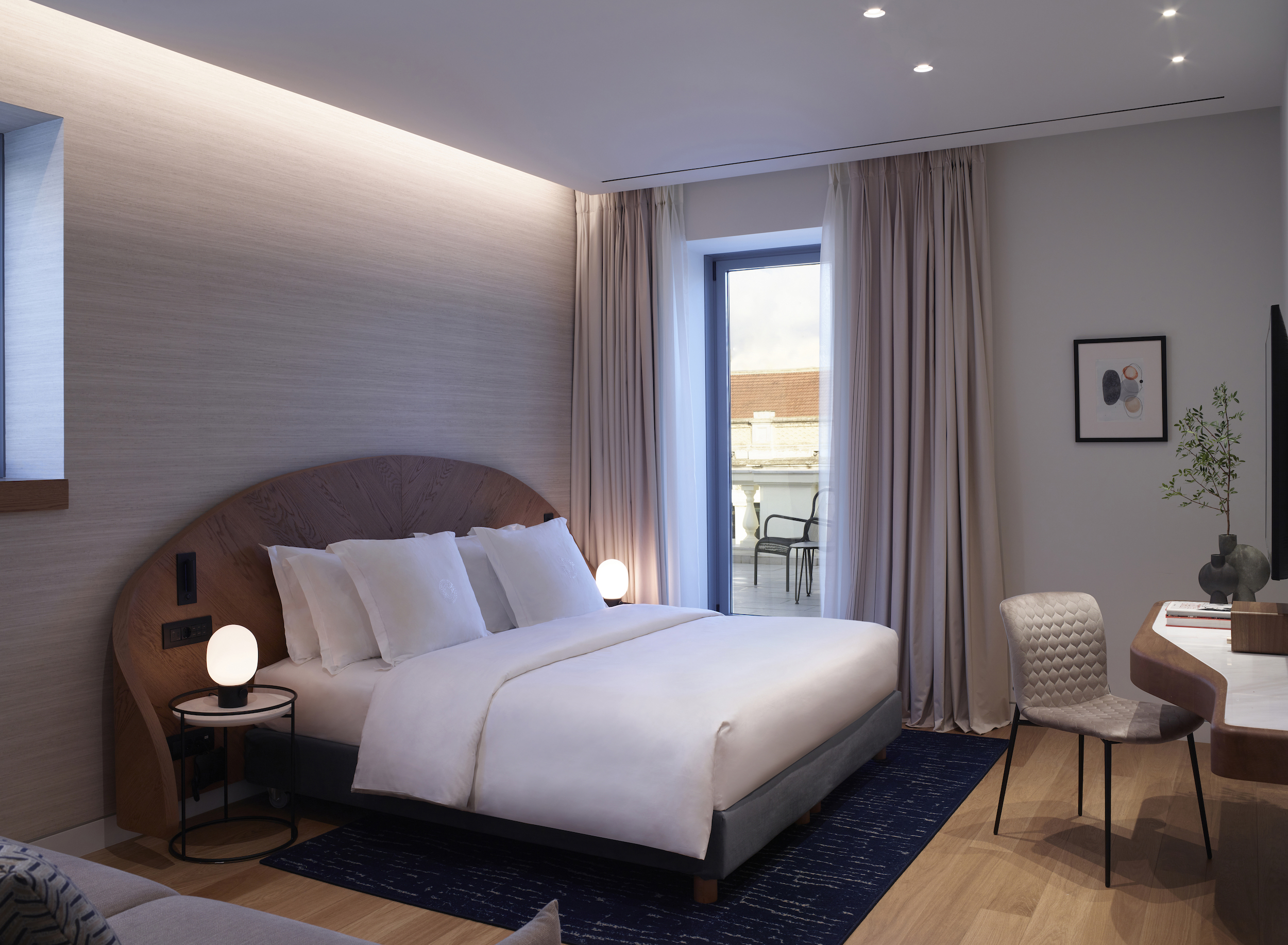 If you’re a fan of Greek food, then we’re sure you already know about the name behind this food-focussed hotel: chef Costas Spiliadis of Estiatorio Milos fame. Not content with establishing some of the world’s greatest Greek restaurants across New York, London, Las Vegas, and Miami, Spiliadis turned his sights to hotels, opening Xenodocheio Milos in October 2021. As you might expect, the dining here is exceptional; a branch of the popular restaurant sits within the hotel walls, serving freshly-caught Greek seafood, traditional dishes such as tzatziki and taramosalata, and even salt collected from rocks in the Aegean sea. The hotel lives up to the standards set by the restaurant, too. Expect wooden floors, neutral decor, and marble bathrooms stocked with Bulgari products. Fitting given its location within the chicest shopping district of Athens.

Rooms start from £310 per night for a classic room. 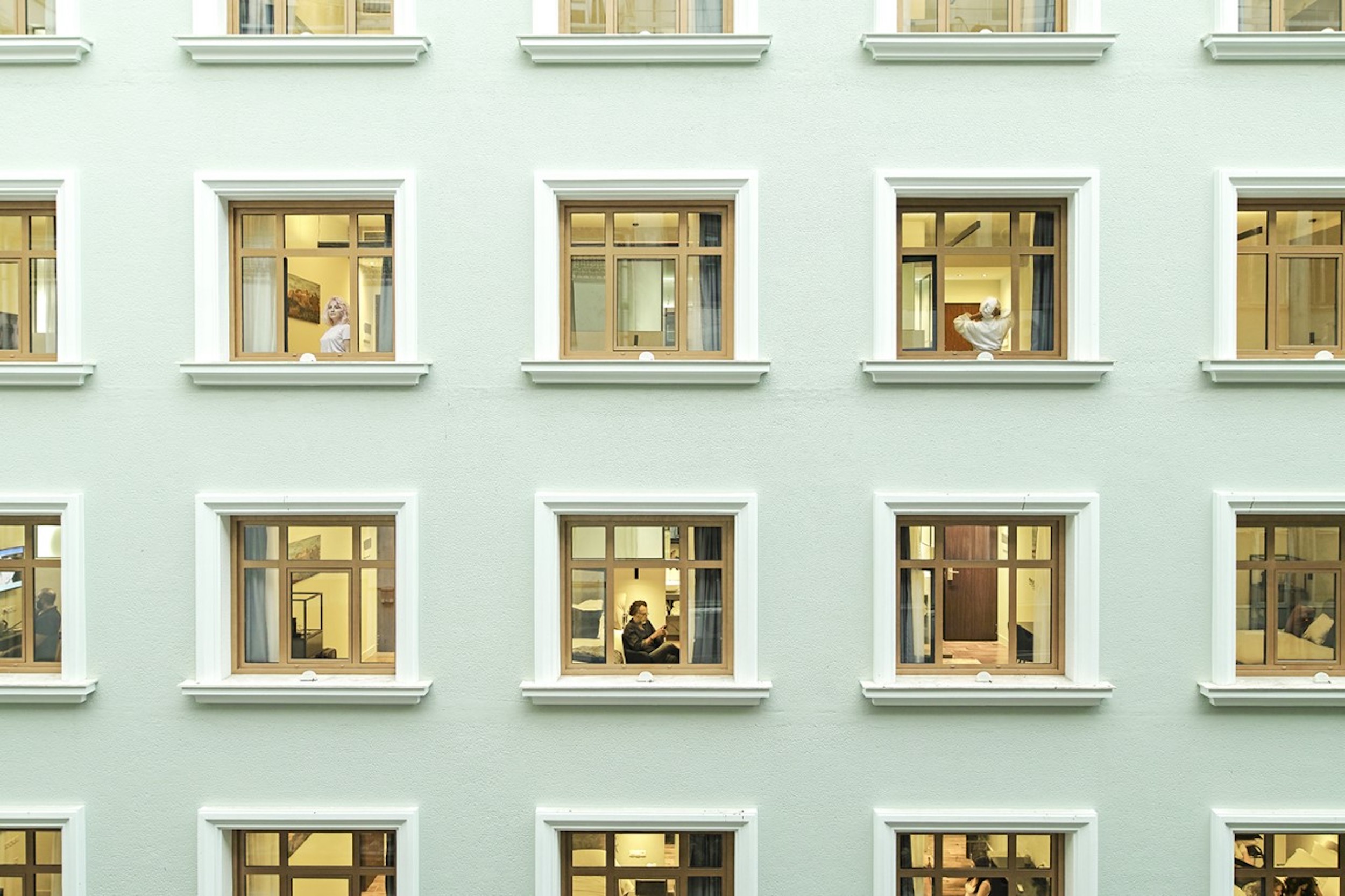 Walking into The Gem Society, Athens, feels like walking into the pages of a design magazine. The mint-green facade extends into a deeper, emerald-like green, tastefully splashed across the lobby. Slotting seamlessly into its location in Athens’ ‘historic triangle’ (once home to the big names in banking), rooms here are on the spacious side for city-accommodation. Many overlook the street; choose the Deluxe Terrace for partial Acropolis views. Downstairs, the Almaz Spa uses natural products from Greek brand, Apivita, while the ground floor resto-bar, Muse Bistro, is a wonderful spot to stop a while on your first night in the city.

Rooms start from £96 per night. 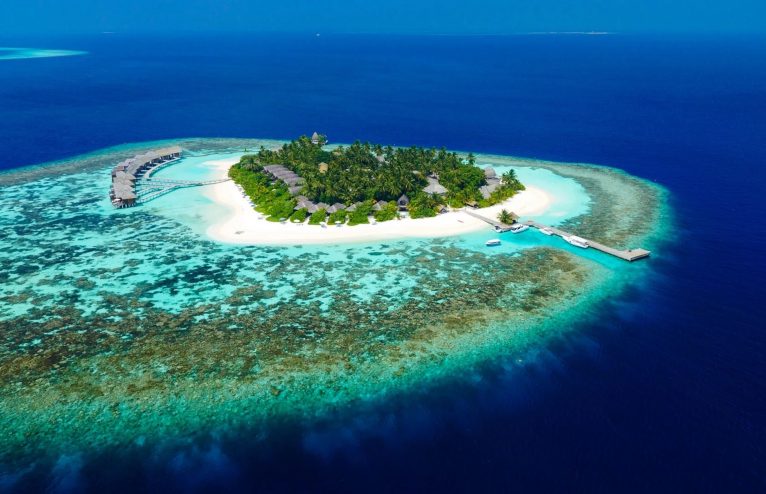 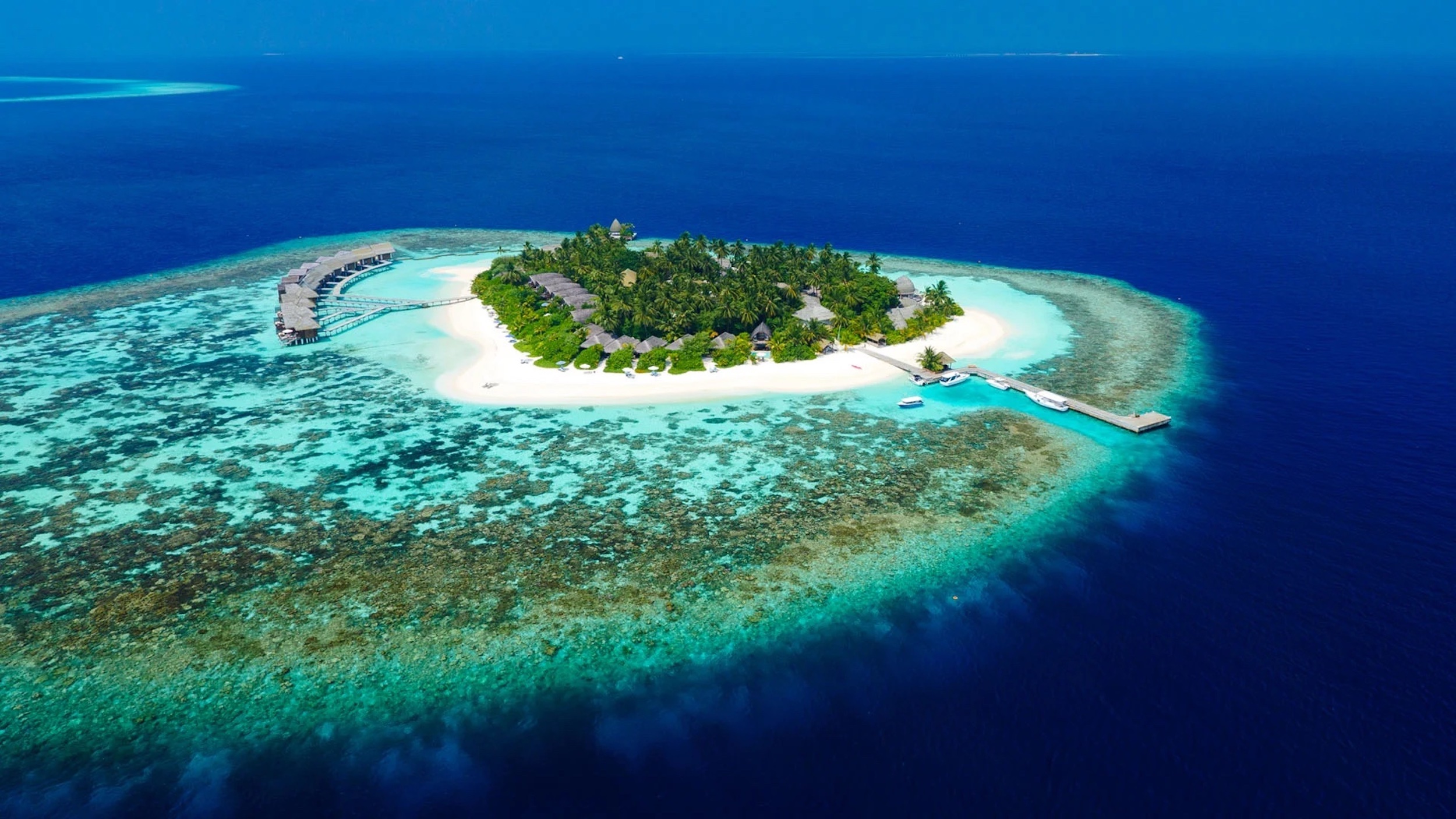 Ultra-Luxe Escapes For The Trip Of A Lifetime

The Best Islands For Your Next Family Getaway