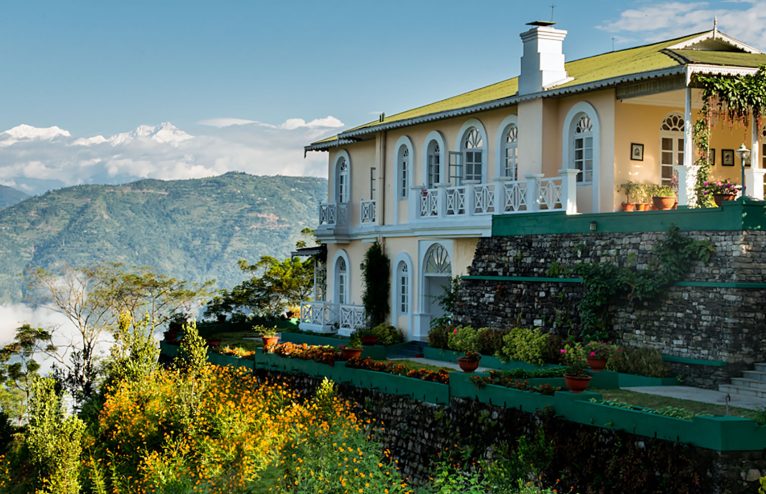 To be descended from the heavens and be perched on the clouds – that’s the sensibility an experience at the Glenburn Tea Estate gives you.

The nearest airport to Glenburn is Bagdogra, which can be a two and a half hour to a four hour drive, depending on traffic. I arrived at noon. A very soft spoken, gentlemanly chauffeur sent by the resort was waiting for me. Once we reached the vehicle I saw him very spryly , though discreetly, in the boot of the jeep open a flask and assemble some lemon juice on a tray. A cold towel was added to the tray and I was welcomed with some refreshingly cold lemon juice.

I had flown in from Assam. Despite Assam being a contiguous State, the travel connections are so convoluted that I had been travelling for over nine hours since 3.30am that morning. It is typically best to get to Bagdora from the eastern city of Kolkata which is about an hour away by air. Tiredness may have gotten the better of me had it not been for the beautiful drive. Bagdogra is in the plains and it was surprisingly very hot when we set forth from the airport even though it was the month of November. First we passed a slew of tea plantations on flat land. The mountains emerged gradually – first as a silhouette. Lightly shaded, they appeared just as an impression against the skies. As the vegetation began visibly changing, the tall trees provided perfect terrain for the sun to play hide and seek. At sunset the sun quickly turned from an unclear blaze to a disc of clear saffron and then wine red before it was gone. 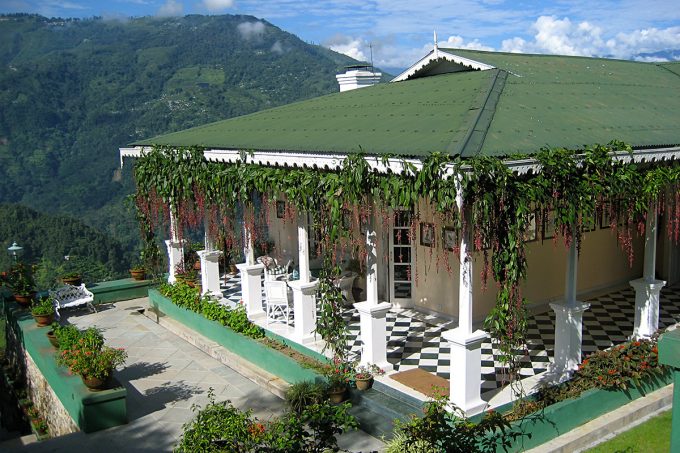 One completes a bumpy stretch of ride to arrive at an oasis of gentility, serenity and aristocracy that forms the main ‘Glenburn house’. I arrived at the Estate at nightfall. The Estate Manager and his lovely wife were patiently waiting to greet me with an emerald ‘scarf of welcome’.

Then I was led to an aristocratic living room with rich but soft furnishings and upholstery in the colours of maroon and cream, beautifully accessorised with olive green cushions. A crackling fire in the quaint fireplace warmed the room into a hug. Bookshelves told stories inviting one to ‘re-hear’ them. As the bookshelf row ended, the room opened into my bedroom.

The rooms, each individually designed, exude warmth, character and homeliness. My room was one fit for a Princess. It was butterfly themed with a mix of luxury and warmth that coexisted with nature brought right into its midst in butterfly paintings and floral prints in soft pastel pink, green, white and cream. The bathroom, stamped with historical character, was ornate and spacious. 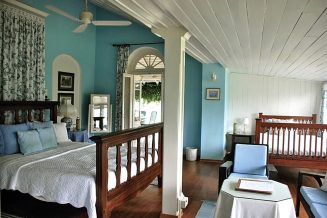 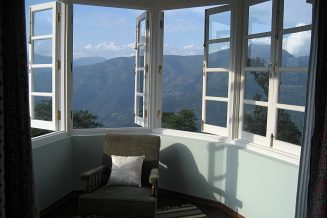 The tiredness I felt post my point to point journey of about 15 hours was mitigated by a nourishing, freshly prepared meal that comprised the Indian delicacy biryani (rice cooked in the Mughlai tradition with meat) and several side dishes and condiments such as a raita preparation (curd with cucumber and spices); local pickles; a delicious dish of aubergines and salad. Dessert was apple crumple pie assembled so artistically in cocktail glasses that they were an absolute visual treat. Yet, what I loved most, were the tiny heart shaped, ‘homemade in Glenburn’s kitchen’ dark chocolate bites which are a daily ritual there.

I was up before dawn the next morning, excited and eagerly awaiting for the sun to lift into the skies so I could get a view of the breathtaking snow capped Himalayas, and the majestic Kanchenjunga peak in particular. But unfortunately, the mist was stubborn. Though all of us who were staying at Glenburn were beyond eager for a glimpse of the silver peaks, on both days I was there, the peaks remained out of reach. Nature has its way of humbling us and reminding us of the tower of its mercurial moods.

The Glenburn Resort is spread over four levels astride a hill slope. The breakfast courtyard was two levels below the building where I was staying. Pretty cane chairs and tables in a mountain clearing created the feeling of being on a hill top that ends where a mountain forest begins; evoking a sensibility of wilderness in a cacoon of gentility. 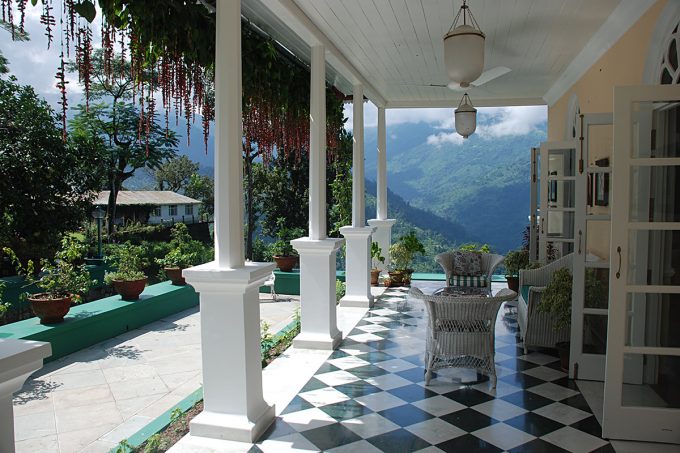 Post breakfast, together with some of my fellow residents, we went on a trek organised by the Resort. On the way we tasted ‘tea flowers’ – the flowers of tea shrubs that taste of nectar in the middle and that are a favourite of local school children who pluck and eat them on their way to and from school.

Less than half way into the trek, while the others took an easier and more predictable route my guide led me through a much more challenging option. This turned out to be the toughest trek I’ve ever done. We navigated inexorably steep slopes with no semblance of a track or trail but just dense mountain vegetation. Once we reached flat ground and I looked up, the mountains seemed at 70 degrees though while climbing down I felt I was tackling a 90 degree descent! 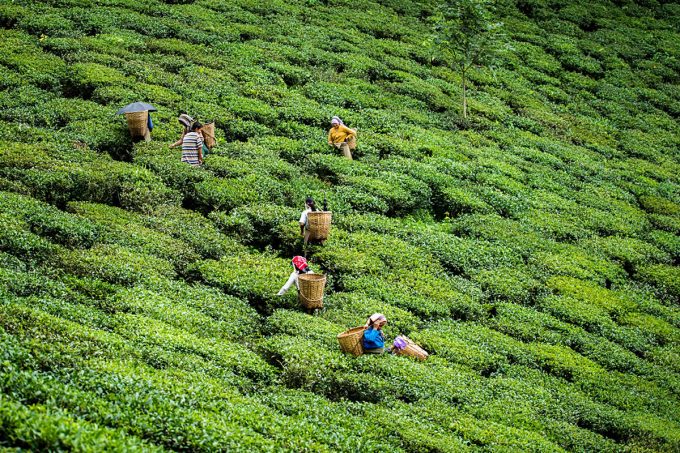 A visit to the suspension bridges is a must – there is a bigger, longer one and a shorter one. The car only goes a limited way to the first bridge and not at all to the second bridge, so it is best to trek to them. I personally loved the first bridge more – it was quaint and straight out of a Bollywood movie. Precariously put together, it was reminiscent of bridges Bollywood heroes are known to tackle adroitly in film climaxes.

That night the stately table in the dining room was full. And as we raised our glasses to toast we exchanged contacts as most of us were leaving the next day.

Early next morning I left with a song in my heart – of a beautifully evocative experience of the hills and the simplicity of the simply heart-winning hill people. 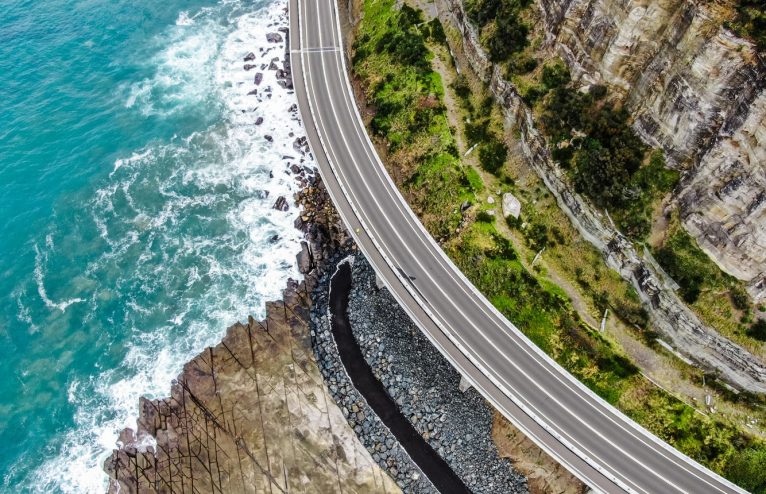 The Best Places To Visit In Japan This Year