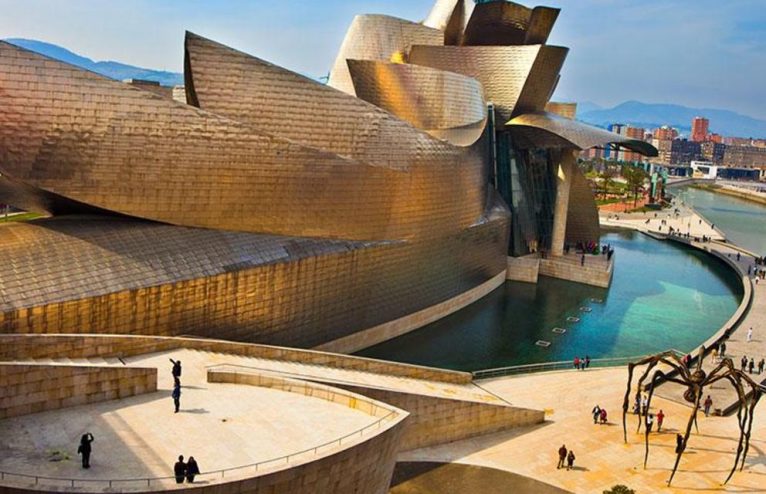 PIN IT
How To Spend A Weekend In...

Bilbao is a secret little gem located in northern Spain in the Basque Country, and has become the perfect city-break for those who enjoy revelling in exquisite architecture and art. Here’s what to do with 48 hours in Bilbao and everything from sights to food.

The nightlife and music scenes are buzzing, with one of their highlights being the BBK Live, a festival located in Kobetamendi Mountain, in the heat of Basque Country, overlooking the city with a line-up of internationally renowned acts.

Jump straight in as soon as you get there and go on a bar-hopping extravaganza around Licenciado Poza, in the neighbourhood of Indautxu. Bars upon bars are filled with chatter and laughter; people spilling out onto the streets as though it were a hot summer’s evening in the middle of August. Through the windows, you can glimpse couples seated in cosy corners enjoying various plates of pintxos, a traditional small snack sometimes the size of an index finger served throughout the Basque Country.

Watch the locals as they move from one bar to the next, replicating their movements as they hop across the road or a few doors down for more wine and more pintxos. All of the bars in this newly reformed square are within walking distance from one another, so you’re bound to end up dancing the night away from all the excitement. I certainly did.

Home to world-famous museums, galleries and architecture, Bilbao has become a hotbed of art and design. Hop on over to the Art District to explore the open-air sculptures, such as Louise Bourgeois’ Maman, a monumental spider that towers and looms over the gasping bystanders stopping to take some snaps. As you approach the main area, you’ll come across the Guggenheim Museum, a mesh of undulating metal that resembles an abstract ornament.

Before its inauguration in 1997 by King Juan Carlos I of Spain, the museum area was predominantly used as a port that connected the main European cities. Raw materials, iron ore and coal would be imported and exported, causing the site to become largely industrial. It’s incredible to think that this glittering titanium-clad museum sits on what was one of the largest hubs of industrial shipping in Europe. Now there’s an abundance of art instead of waste and pollution – an empowering motif and one that has inspired similar art projects elsewhere around the globe.

There’s plenty of music too. One Friday a month, the Guggenheim Museum invites members of the public to enjoy a night of dancing and art. You can grab a drink of kalimotxos (pronounced cal-ee-MO-cho), a Basque classic consisting of red wine and Coca Cola (it works!), and roam freely around the building before heading to the main dance area. A great blend of culture and activity.

Bilbao’s Old Town, known as the Casco Viejo, is full of narrow winding streets, colourful architecture and a feast for your eyes with shops and bars. Some of the top sights in the Old Town include the Catedral de Santiago de Bilbao, the Archeological Museum, the Plaza Nueva, and the churches of San Nicolás and San Antón.

Basque and food go hand in hand. The city’s famous La Ribera market sits just on the edge of the Casco Viejo, and is a good place to get acquainted with Bilbao’s famous food scene, and to grab some local products to take back home. The market is housed in an historic building from 1929, on the site of the old market dating back to the 14th century. Not only will you find stalls here, but also bars, restaurants and live music spaces, making it great a place for a lively night out too. Covering over 10,000 m2, it is the biggest indoor covered market in Europe.

Experiencing the authentic Basque lifestyle means tasting some fine wine – and who can argue with that? The Bodegas Ados Basarte is situated in Bakio just outside the main city, and is surrounded by impeccable slopes of greenery. The owners, Arantza and Maria Jose, who were born and raised in Basarte, invite guests from all over the world to visit their home and vineyard. In Spanish, they explain the ins and outs of their winemaking process with enthusiasm, weaving the guests around the various pockets of their household. Txakoli is the Basque signature white wine made from grapes grown in their very own vineyards. Before tasting, the ladies set out a selection of delicate wine glasses, tentatively pouring a glistening fountain of their wine into the individual glasses. I started craving a nutty cheese as soon as the velvety liquid touched the tip of my tongue. So punchy.

You know you’re experiencing traditional dining when all of the locals or natives dine in a particular restaurant. It’s the same as visiting a Turkish restaurant in Dalston filled with potbellied Turkish men sipping Turkish tea, or trying out a Vietnamese restaurant that your Vietnamese friend has recommended to you on several occasions. Restaurante Astei is the equivalent: brimming with families and children from the local area, this restaurant oozes authenticity and true Basque grit. The menus are in Basque and the wine bottles aren’t labelled or branded, which feels even more rustic. It’s fantastic.

You must try the unique Epelde & Mardaras gallery pop-up restaurant located in the compact Casco Viejo. This has to be one of my favourite dining experiences of all time. There’s something oddly poetic about floating through the streets of the old quarter when the shops are closing and the street lamps are starting to illuminate. The rain makes everything sparkle and blur.

Upon entering the apartment, you’re immediately greeted with extraordinary artwork that adorns the hallway. “This is the Romantic room” the host and founder explains to us as we gawp in awe at the trinkets and objects that surround us. Within the different rooms, tables for four or five people are neatly arranged. There’s the most extraordinary bookcase crammed with books about art and literature, all in Spanish and Basque. Soft and slow music can be heard in the background from somewhere in another room; the floorboards creak slightly as you edge in further. Finding our own designated dining area in a room with a view, we sit and chat into the late hours sipping from wine glasses shaped like bowls, discussing star signs, books, romance… You get the gist. In retrospect, I would eat here again. And again.

Go to Calle Ledesma, in the centre of Bilbao for a pinxto crawl. This is like a street party lined with bars, outdoor tables all the way down the middle. Explore pintxo styles through the ages by starting with classics like Cafetería el Molinillo and Artajo and then move on to new additions like Bilbao Berría. Wander through and follow the locals, but make sure you stop by these on the way!

If you’ve got extra time to squeeze in a tour of the Basque coast, make sure to start at La Salbaje Surf Eskola located in Sopelana and make your way to San Juan de Gaztelugatxe where part of Game of Thrones was filmed. In the latter, you can take an adventure down the hill and across the winding medieval bridge for some remarkable views (and a handsomely rewarding workout). 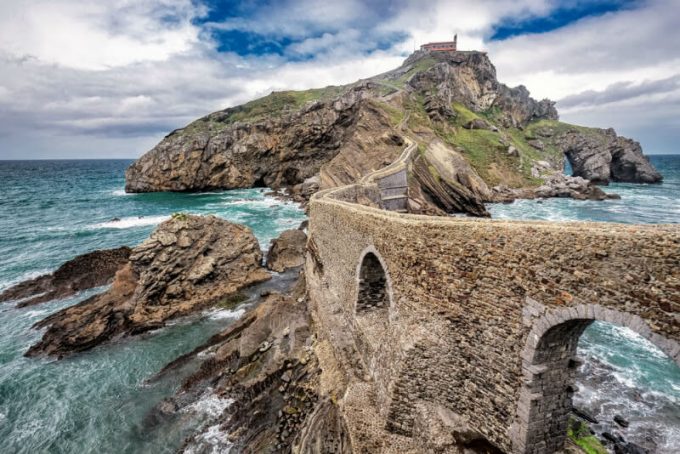 Exploring Bilbao’s burgeoning street art scene is equally rewarding and will make you fall in love with city’s artistic character even more. Political messages, geometric shapes and vivid colours are scattered around the city, particularly along the Ibaizabal river, and you can take a guided bike tour or mooch around at your own leisure.

It’s safe to say that I’ve been charmed by Bilbao and the Basque Country. I’ve fallen for its staggering architecture, beautiful landscapes and marvellous food. With BBK Live coming up, I’ll be heading there for a fiesta!

This edition of Bilbao BBK Live festival this year brings you Florence + The Machine, Gorillaz, The XX, The Chemical Brothers. 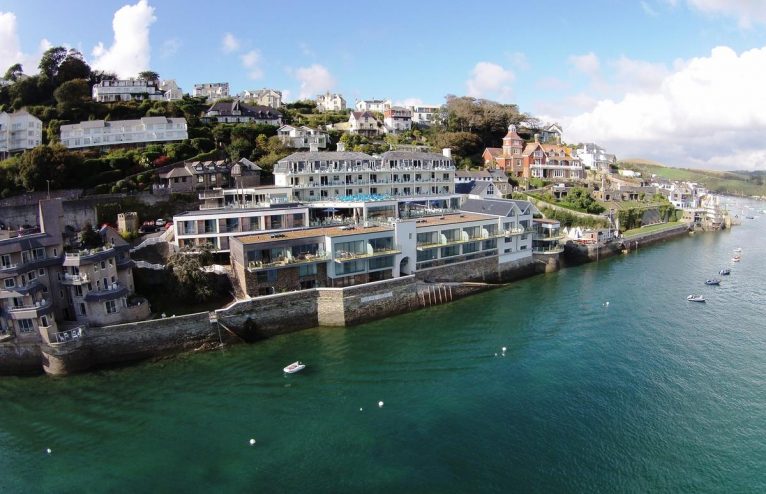 A Weekend At The British Seaside Salcombe, Devon

The Address For Lovers Of French Wine: Château Cordeillan-Bages