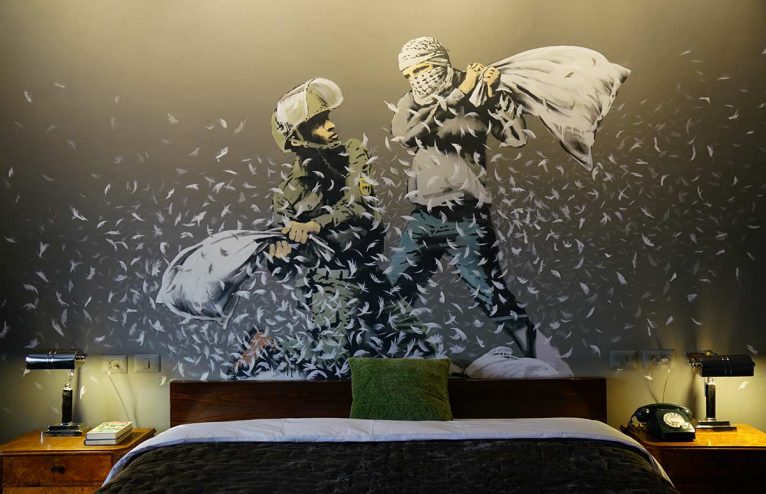 Inside Banksy's Walled Off Hotel, Bethlehem: sleep in a political work of art

In 2017, marking the 100th anniversary of the British control of Palestine, Banksy financed the creation of The Walled Off Hotel in Bethlehem.

You are literally sleeping inside a work of art, with 3 of the 10 rooms designed by Banksy, Sami Musa and Canadian artist Dominique Pétrin. The property features the hotel, museum, protest and gallery all in one. An art installation? Maybe. But guests will likely come away from this memorably-designed hotel knowing more about the conflicts in the region than otherwise.

For those for whom Banksy is unknown, he is an anonymous England-based graffiti artist, political activist and film director. His street art and subversive epigrams combine dark humour with graffiti executed in a distinctive stencilling technique. His works of political and social commentary have been featured on streets, walls, and bridges of cities throughout the world, and he has become one of the most highly sold and indeed expensive artists in the world. 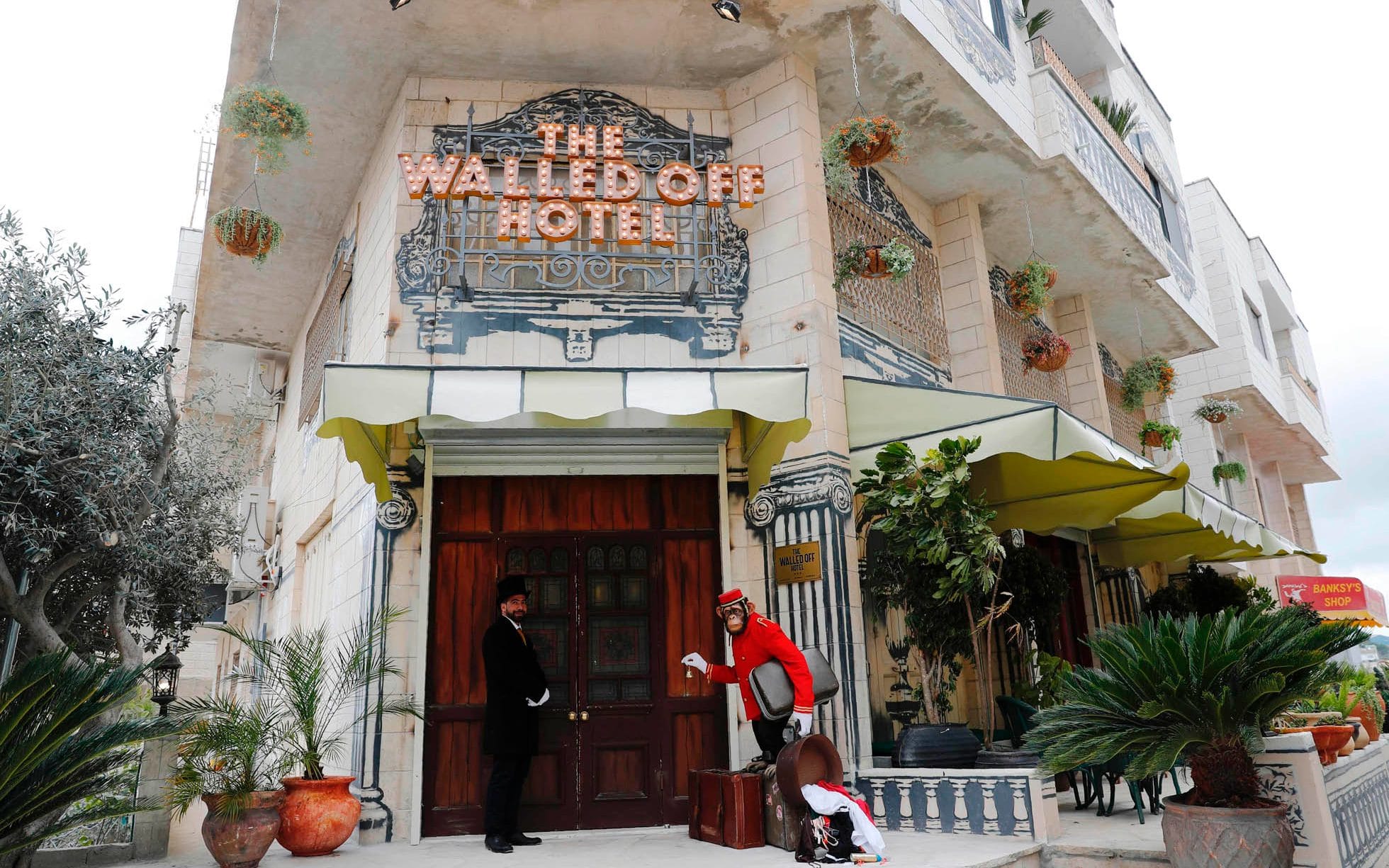 The Walled Off Hotel is a play on the name of the infamous American hotel chain, The Waldorf – one of the world’s most luxurious hotels, with the spectacular views, set in the most desired New York locations, with the best food offerings. And here we have the Walled Off, which is directly facing the wall dividing Bethlehem, with a rather less desirable view, in the least preferred location and deliberately limited food.  In fact it is quoted as having “the worst view in the world”.

It is positioned directly in front of the wall, the Palestinian Camp (described as an open-air prison), Israeli Settlements, and a check point which controls the only road to Jerusalem.  To explain the history and current happenings, the hotel has a museum, art gallery and regular events to explain what is happening. Take for example, ‘The Alternative Nativity’, choreographed by Danny Boyle (of Slumdog Millionaire and London’s Olympic 2012 Opening Ceremony), based in the parking lot of the hotel. 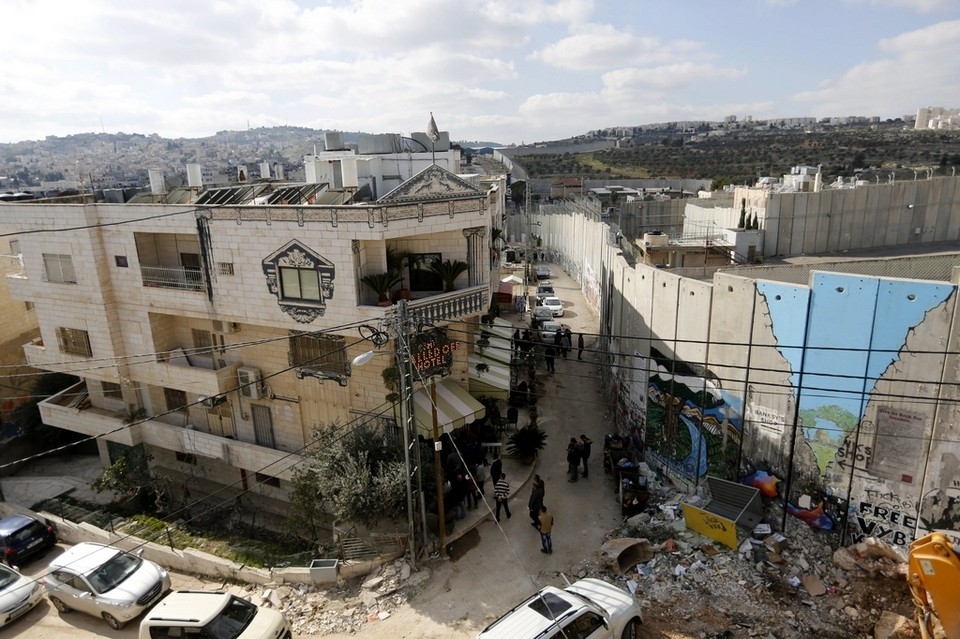 On another occasion they choreographed a virtual visit from Queen Elizabeth, who is graffitied as saying ‘Sorry’ for the Balfour Treaty which began a nation called Israel out of the land of Palestine. No matter when you visit, they have a spray paint workshop so that you can be taught how to express yourself on the wall, create a stencil, and contribute your thoughts. The hotel continually deploys clever ways of keeping the Palestinian Narrative alive and relevant.

The rooms themselves are elegant and quirky, from the disconcertingly lavish presidential suite with a hot tub, to the more standard private rooms and dormitories, which sleep six in bunk beds, scavenged from an abandoned army barracks. Playful and strongly political. All have the “attraction” of views of the concrete wall and its watchtowers, getting about 25 minutes of direct sunlight a day. Staff would not indulge a request to view the artist-designed rooms, although you may be lucky and find their occupants let you take a look. 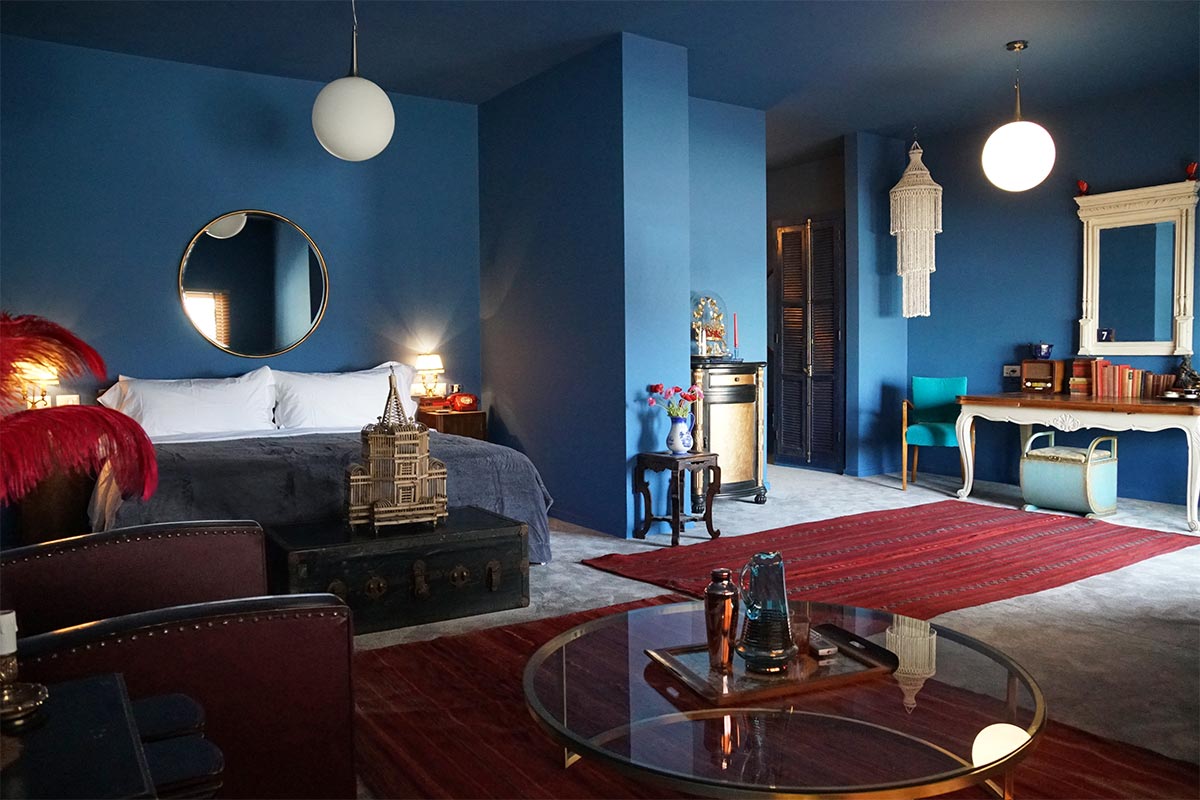 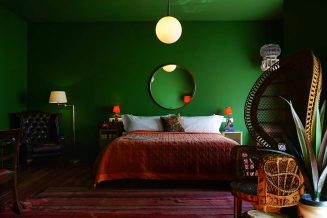 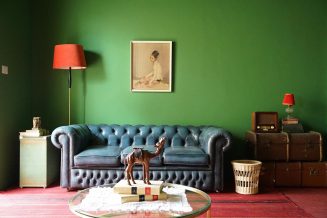 Rooms are equipped with everything one would expect from a new, fully-furnished hotel, and even in dormitories guests are met with high-thread count sheets, quality bath linens and powerful showers (not a given in this part of the world). There are deliberately no kettles in the room, but tea, coffee, biscuits are provided in elegant shabby chic tea sets in a common lounge area just outside the room. The limited kitchen is to encourage hotel residents to take just a few steps outside of luxury into the plentiful local restaurants and bars. 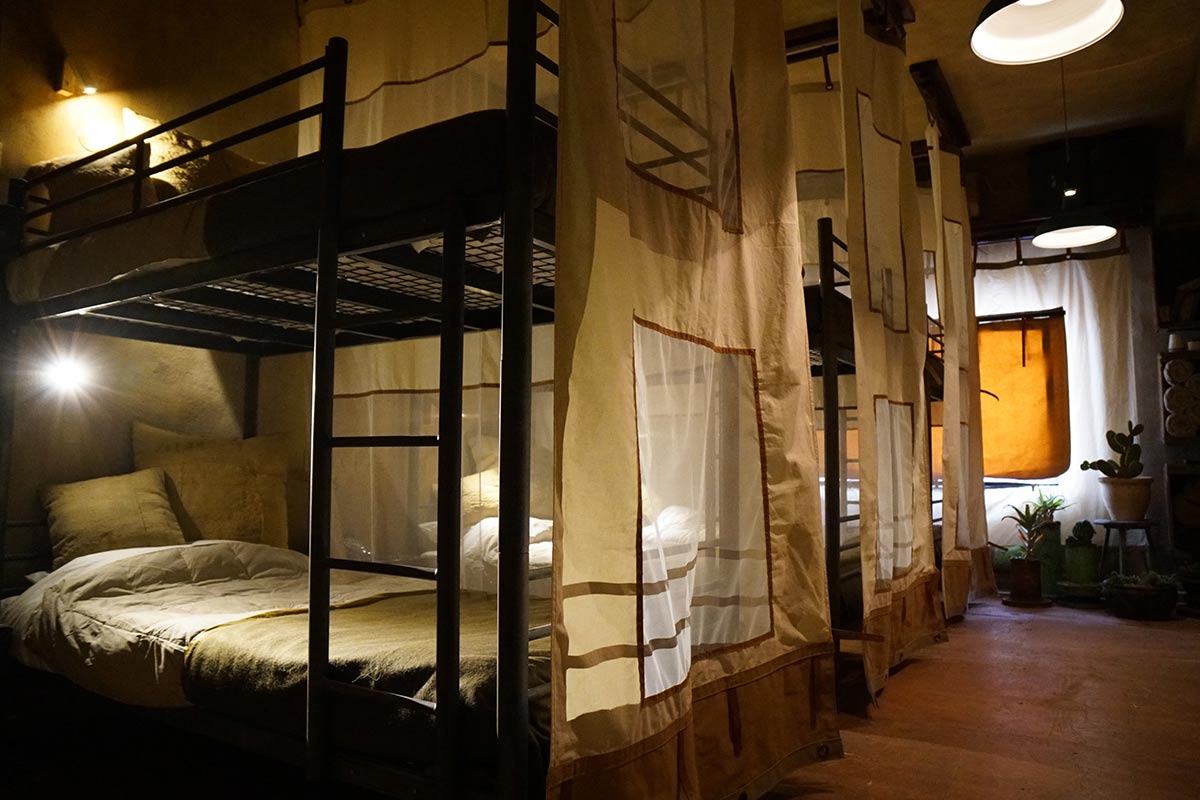 Why limited food? This Hotel is no ordinary hotel, just as you as a visitor are no ordinary visitor.

Clearly Bethlehem, Palestine is not your average holiday destination – you are there to learn, experience, partake in the political, spiritual, cultural wonders presented for the three largest religions in the world – Christianity, Islam and Judaism. Because of the significance, The Walled Off, is there not to encourage you to sit in your room or even in the hotel. Deliberately therefore, there are no television sets in the room, rather for films or for important moments – like a moment in news, in popular culture like the royal wedding, or for a football match for example, it is projected upon a blank screen on the wall, for all to enjoy from the bar. 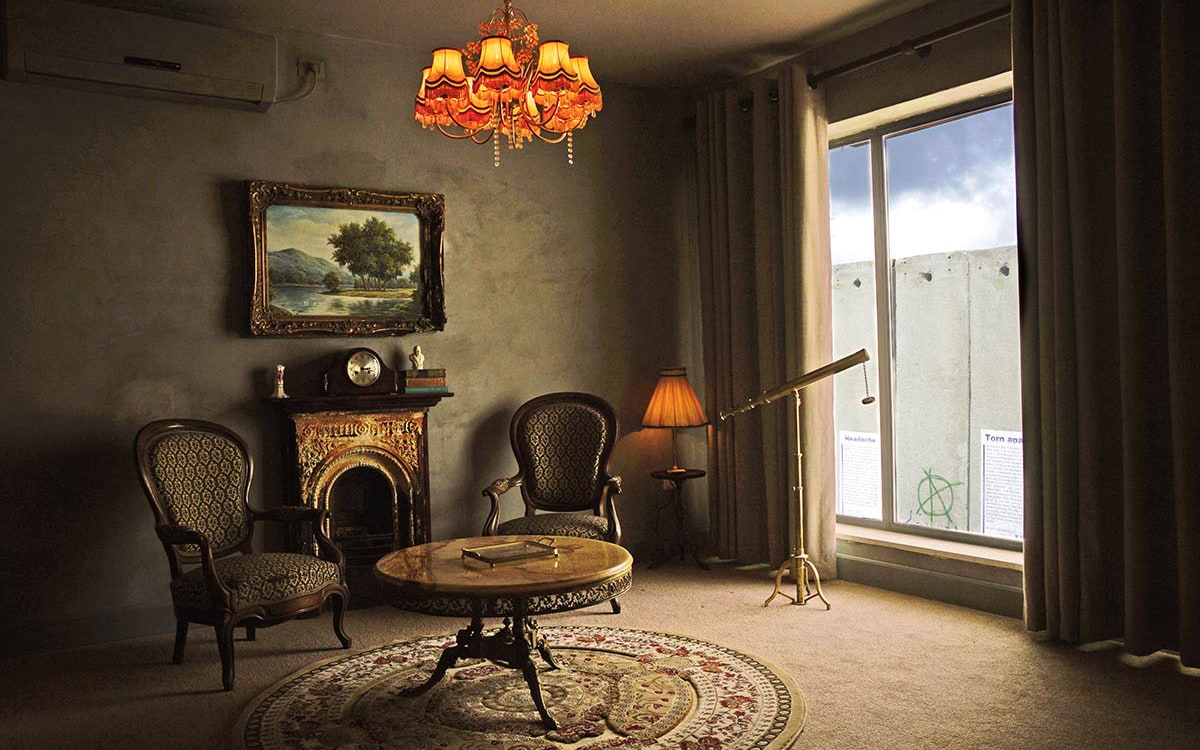 ‘The news is only preaching to the converted and those that watch the news, but today’s youth have to be reached in other ways, through fashion, through the visual arts, through music and other forms of media’, – and that is what Banksy is committed to produce.

It is a destination in its own right, with nearly 55,000 people from all over the world visiting The Walled Off Hotel alone. The hotel, a former pottery workshop, has a dystopian colonial theme, a nod to Britain’s role in the region’s history, the reception and tea-room a disconcerting take on a gentlemen’s club where a self-playing piano provides an eerie soundtrack.

Why open a hotel there? What’s wrong with Shoreditch?

This is a place of immense spiritual and political significance – and very good falafel. The architecture and landscape are stunning, the food delicious and the current situation remarkable and touching. We guarantee you won’t be disappointed.

So, what is the wall exactly?

The wall is a military structure over 700km long built by the Israeli government. It encloses occupied Palestine and annexes parts of its land. Depending on who you talk to it’s either a vital security measure or an instrument of apartheid. Its route is highly controversial and it has a dramatic impact on the daily lives of a lot of people.

Painting the wall – is it legal?

It’s not ‘not’ legal. The wall itself remains illegal under international law.

Some people don’t agree with painting the wall and argue anything that trivialises or normalises its existence is a mistake. Then again, others welcome any attention brought to it and the ongoing situation. So in essence – you can paint it, but avoid anything normal or trivial.

Are there any day trips you recommend?

We recommend two excellent tours that should definitely form part of your stay with us, see the bookings page. And there are a host of other excursions nearby including the Dead Sea, Hebron and Jericho. Hotel staff will be happy to assist you. For some ideas see the visitor’s book on the homepage.’

Is it worth it?

All profits made from the hotel go back into breaking even on the costs for the hotel’s upkeep and any profit after that is to be given back to local projects. Banksy paid for the projects installation and will not be making any profits. 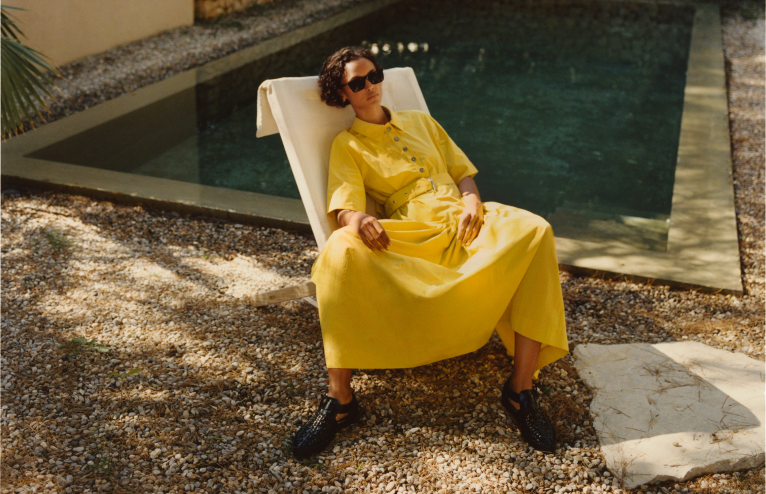 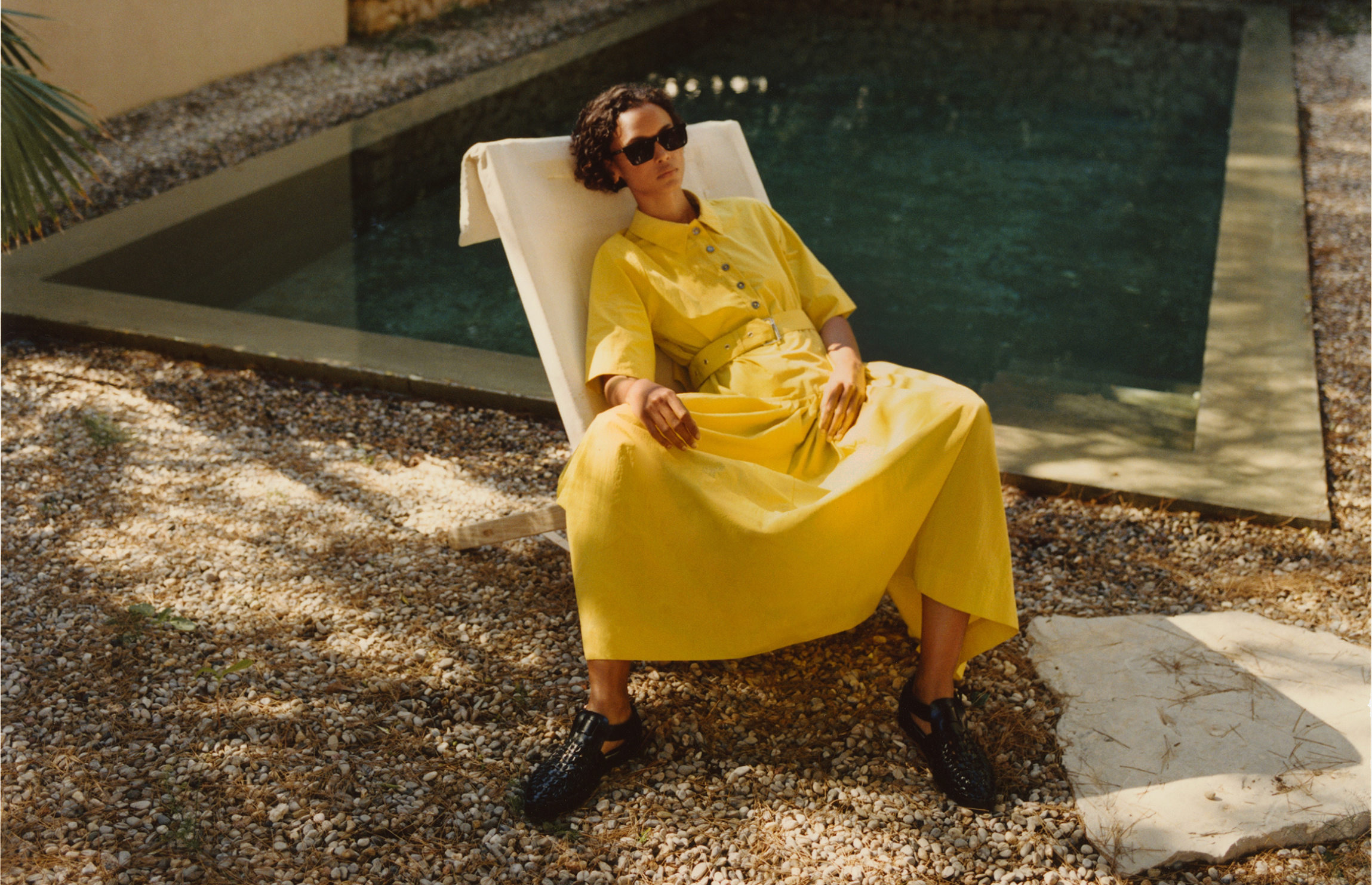