“I bought the property for two reasons,” says hotelier Georges Barthes. “One is for it’s beauty. And the second, is for the view.”

It’s easy to understand why he was captivated by both. The exterior of U Paluzzu Serenu, a 17th century Florentine-inspired Palace cuts a striking figure in Oletta, a tiny hillside village in the region of Nebbio,  known for its mountainous hillsides and fertile lands.

It’s almost hard to believe that no-one else wanted the former private home, which sat for around 15 to 20 years waiting for a buyer. Perhaps, with so much space, it was too grand for today’s humbler living arrangements. But Georges immediately knew what to do with the property. He was already in love with Corsica and had been visiting for over 30 years, flying most Friday nights from Paris into Bastia airport for a weekend stay. He not only held a lasting love for the country but also a long-term dream of opening his own hotel, and saw potential in what is now U Palazzu Serenu.

After sitting neglected for so long (“It was a ruin!”) there was work to be done, but Georges already had in mind a minimalist new look for the residence, which he entrusted to French interior designer Nathalie Battesti, a protégée of Andrée Putman and Christian Liaigre. Months later, when the hotel opened in December 2009, it had been completely restored, and revived. “Only the walls remain,” says George, “Everything else you now see is new.” 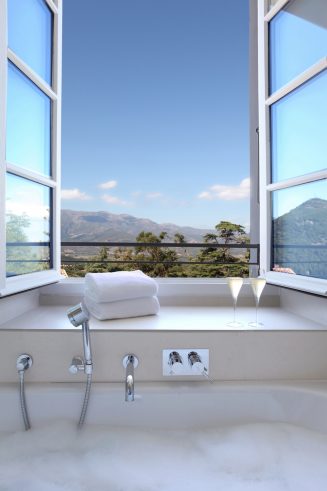 The pared-back style that Georges and Nathalie imagined has not only breathed new life into the building, but it also works as a clean canvas to show off U Palazzu Serenu’s impressive collection of modern art. “The general idea was that art can participate in the serenity of a place,” explained Georges. Some pieces of his own private collection have now found a new home at the hotel, whilst other artworks have been chosen specifically with U Paluzzu Serenu in mind, such as the series of works by Anish Kapoor in the bar, and the metal tree which welcomes you by Wendy Wischer.

The desk in the reception, crafted by French sculptor Paul de Pignol and featuring his signature abstract bronze figures sitting on the top, elevates the everyday mundane into another work of art. American artist Daniel Arsham even crossed the Atlantic to install his piece; a wall with softly concertinaed folds which is now a permanent part of the hotel. But Georges is keen to stress that U Palazzu Serenu is a hotel, not a museum, and his aim has been to create a boutique hotel atmosphere which he himself favours when travelling. In fact, he thinks of it as being more of a small private house, just with service. An offering of just six bedrooms and two suites instantly sets this intimate tone. Each is furnished in Georges’ preferred minimalist style, think immaculate white walls and soothing shades of beige, complemented by bespoke furniture and oak parquet flooring. 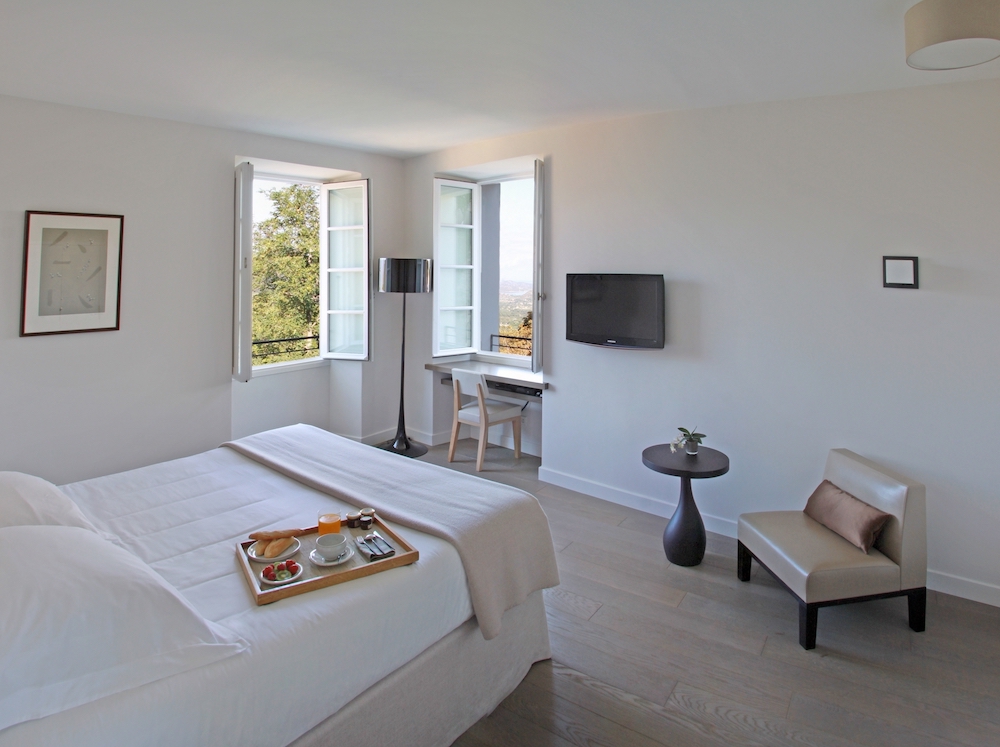 But the simplest and most striking accessory is without a doubt the view.

But the simplest and most striking accessory is without a doubt the view. Huge windows flood the rooms with light and offer sweeping vistas out on to the village, mountains or sea, and if you’re lucky, a spectacular sunset. On the walls hang works from prominent artists such as Kim Tschang Yeul and Conrad Marca-Relli, and Georges has tapped literary friends to curate a specific selection of books for each room. Luxurious comfort comes in the form of huge king size beds, soft linens, spacious bathrooms with double sinks, some with a tub, and organic bath products. 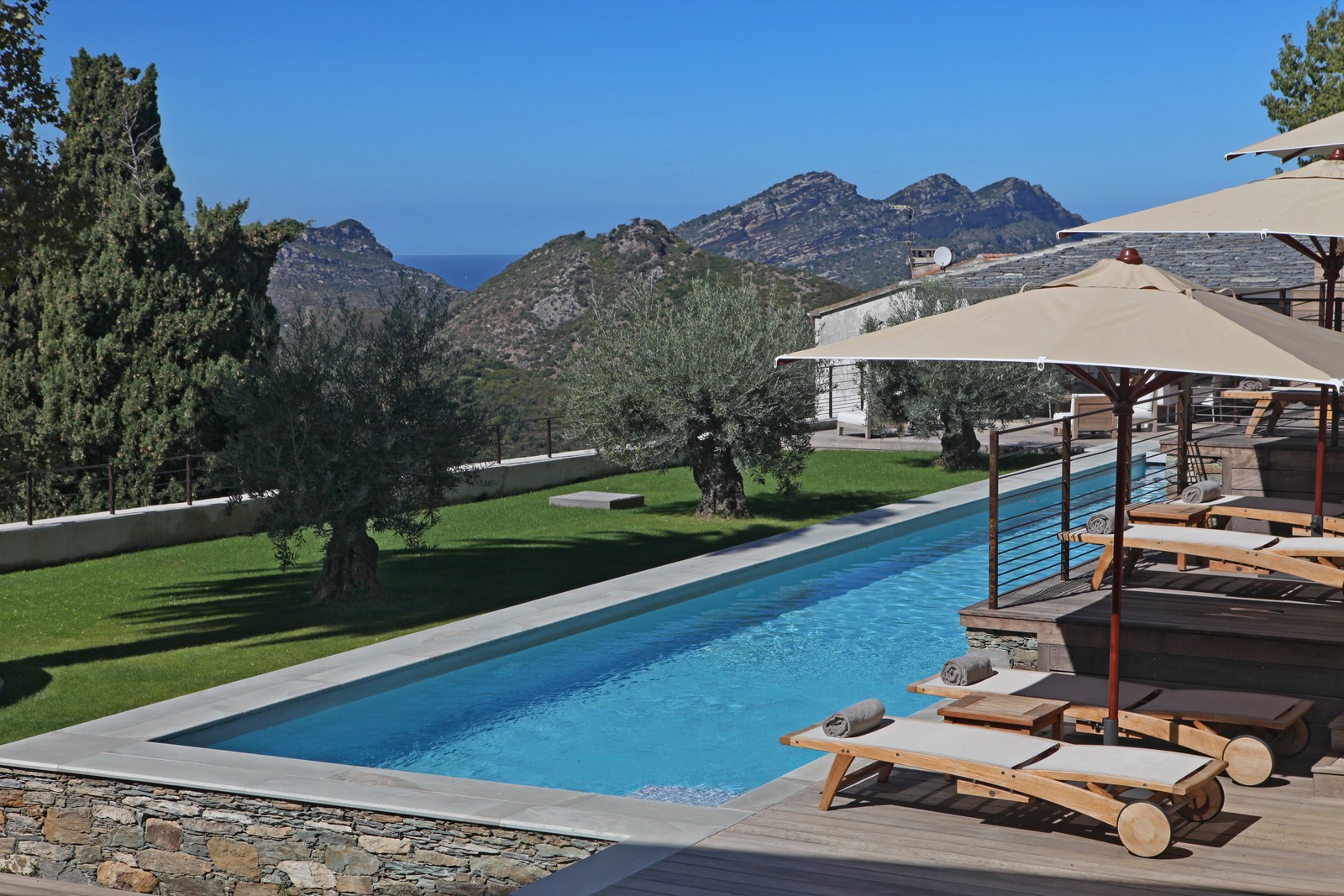 Outside, a slim pool stretches out in front of the mountains, it’s sleek lines mirroring the simplicity of the interiors. It’s also as practical as it is beautiful; not only is it sustainably heated all year round by a solar water heater, but as George points out, it’s actually long enough to swim in. Behind it, the sun beds have been thoughtfully placed to sit in pairs on a staggered stone wall, giving guests a little extra privacy whilst lounging.

Inside in the restaurant (which features a rotating piece of art by Manuel Merida in a surprising shade of electric blue), U Palazzu Serenu’s excellent menu draws the locals as well as hotel guests. The young Corsican-born chef with Portuguese roots is well-versed in both the local and Mediterranean cuisine, and invents a new menu every day based around the country’s seasonal produce; as guests often book long stays, explains George, there is a need to constantly surprise and delight.

In another celebration of Corsica’s terroir, the wine has been selected from nearby vineyards, some of which you can visit during your stay. In the morning, breakfast is perfectly presented in the restaurant or on the outdoor terrace; slender bronze-hued cutlery sits atop soft linens, and breakfast bowls which bring to mind the Japanese style of wabi-sabi actually come from the nearby Poterie du Nebbio, where each piece is handmade in a tiny small atelier. Like in the bedrooms, the mountainous view is the finishing touch, but it’s also Georges’ attention to detail which contributes, as intended, to such a serene start to the day.

Rooms start from €190 per night, including breakfast. Georges is also able to organise bespoke packages based on guests’ needs.

Hot Hotels: The New Hotel Openings To Know About In 2021

A Toast To Six Of Our Favourite Hotels In 2020