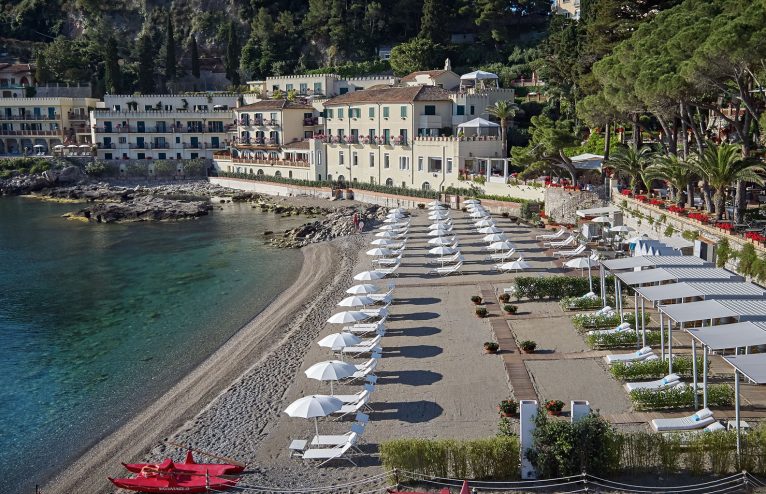 Villa Sant’Andrea was built over a hundred years ago as a stately beach residence on the edge of one of Sicily’s most beautiful bays and below the historic hillside town of Taormina. Now, part of the Belmond family, the hotel offers a chic, coastal hideaway nestled within orange blossom trees.

Speeding along the pretty coastal road that bends round the bay of Naxos, over the headland and into Taormina, it’s easy to miss the narrow turning down towards Belmond Villa Sant’Andrea and harder still to spot the lemon-coloured buildings tucked majestically into the cliffside amongst lush subtropical gardens. 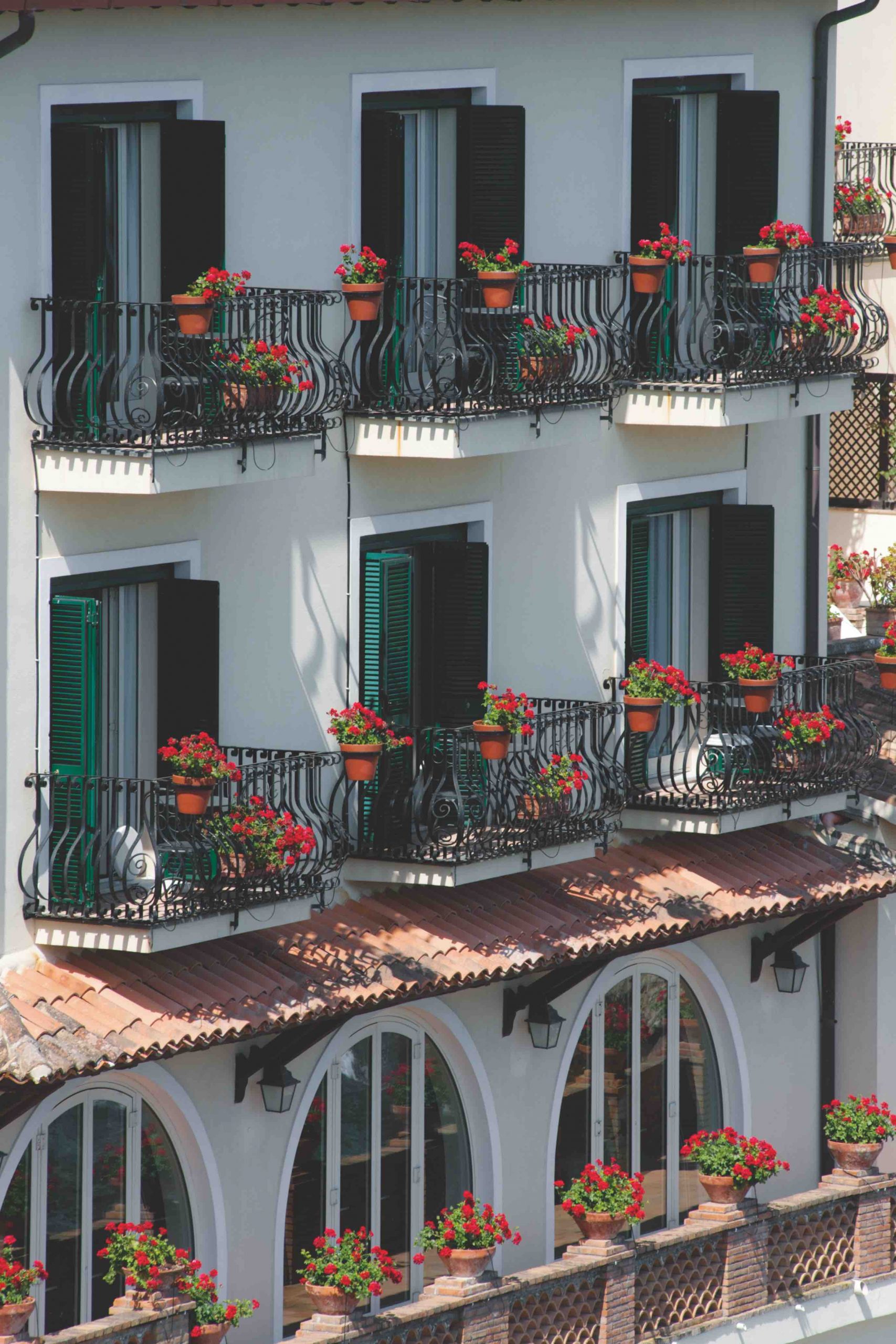 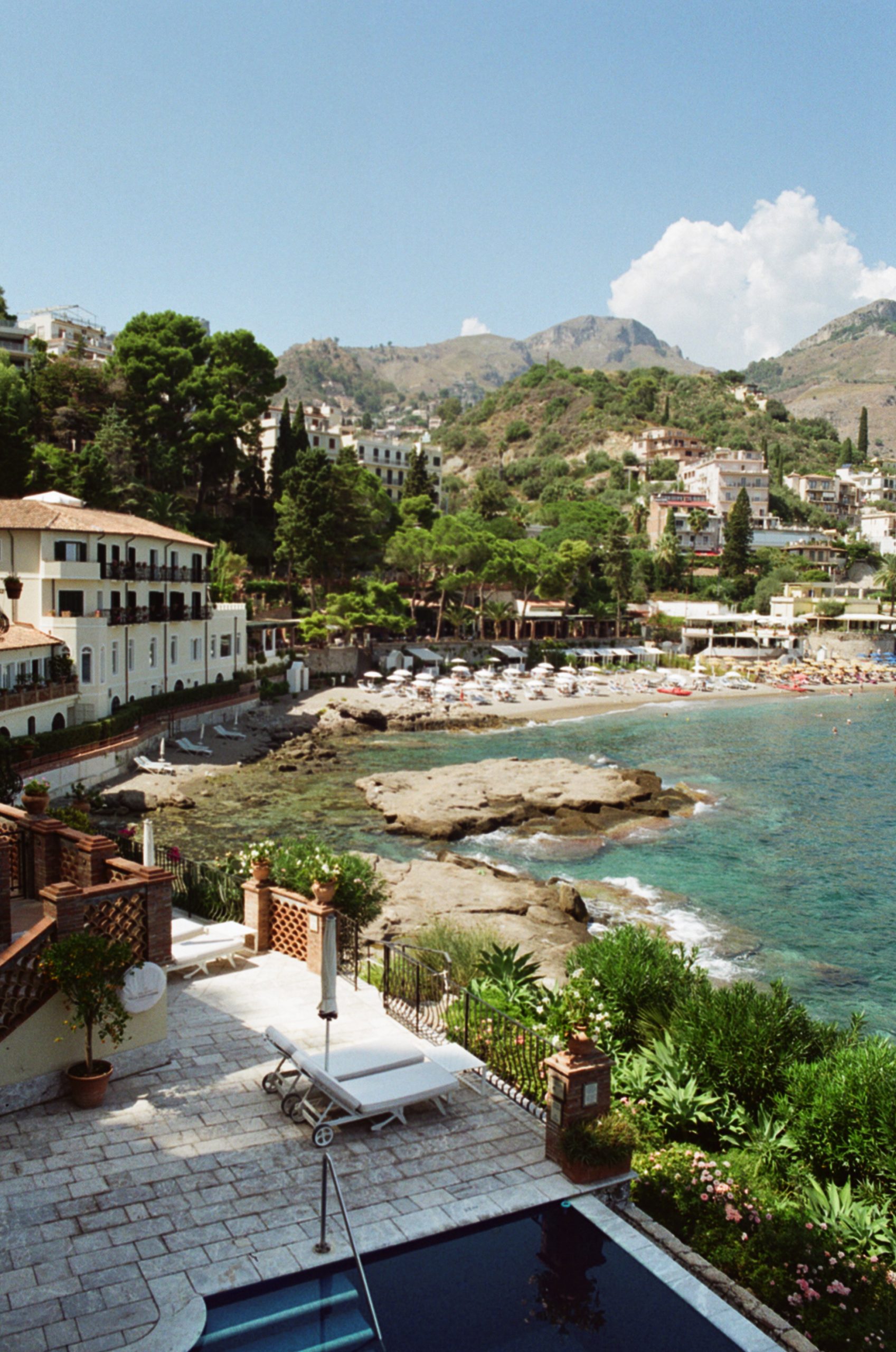 In fact, it’s only when you’re bobbing out at sea that you can fully appreciate the sheer beauty of the buildings with their intricate stone walls and balconies spilling over with flowers. The hotel is one of a few that line Mazzarò bay, but it still manages to feel secluded, spacious and exclusive. At night, the crickets and the waves are the only sounds you’ll hear.

The main villa, dating back to 1919, sits at the heart of the hotel with Baroque paintings and original family heirlooms artfully placed throughout, but never in a way that feels cluttered or ostentatious. Instead, the focus is on light and space so that even in the windowless corridors there’s an impression of bright airiness and the rooms are all subtly fragranced with neroli, jasmine and citrus.

The mood is relaxed and carefree, and there’s a real sense that the staff are proud of where they work and passionate about their culture and heritage. We felt more like we were guests of an eccentric, wealthy friend rather than customers. For most, the location directly on the beach front is the main draw, with the clear, turquoise sea, as warm as bath in September, but Belmond Villa Sant’Andrea also benefits from being within easy reach of great sightseeing spots, restaurants, shopping, bars and the hiking paths of Mount Etna.

... it retains it's sense of old-world glamour with a live pianist serenading late into the night.

The rooms are spread throughout the original villa and a newer building, which houses sumptuous sea view and junior suites. The decor is elegant and artistic, blending neutral tones with bright shades of turquoise and gold detailing.

Abstract art hangs on the walls alongside gorgeous bold Sicilian ceramics and unique, antique furnishings. Most rooms have balconies or terraces with plush king-sized beds positioned in front of arched glass doors and grand marble bathrooms with copper baths or emerald-tiled showers and an abundance of luxurious Ortigia amenities.

The rooms in the new building have the added bonus of proximity to the swimming pool from which there are steps down to the private beach, meaning that after a day’s sunbathing you can wander barefoot back to your door without passing through the restaurant or reception.

On warm evenings, the plant-filled terrace of Ristorante Oliviero is romantically lit by candles with tables dotted along the seafront (mosquito repellent is a must). Established in 1965, the restaurant has a reputation as one of Taormina’s best, and retains its sense of old-world glamour with a live pianist serenading late into the night. The menu is concise with a welcome focus on Sicilian specialties, seasonal produce and fresh seafood (options vary according to the catch of the day). The parmigiana di melanzana is close to perfection – thin slices of aubergine layered with mozzarella, rich tomato sauce and grated parmesan – and the deliciously fresh tuna tartare comes with crunchy strips of wild fennel and a creamy avocado and red onion purée.

Lunch is also served at Oliviero, but if you’re keen for a change (the lunch and dinner menus are the same), the hotel offers a free hourly shuttle up to Grand Hotel Timeo, its equally beautiful sister property, located in the heart of Taormina. Whilst Belmond Villa Sant’Andrea prides itself on laid-back luxury befitting its beach setting, Grand Hotel Timeo is grand on another scale and was once frequented by literary greats such as D.H.Lawrence, Truman Capote and Tennessee Williams. Expect diners to be glamorously dressed in shirts and dresses, even for lunch, which is served on rooftop terrace with sweeping views of the ocean and Mount Etna in the distance. Try pasta con sarde, a Sicilian favourite cooked with a sauce made from fresh sardines, or the lobster risotto with zucchini flowers, and then spend an afternoon wandering through the town’s quaint cobbled streets.

Breakfast is best served on the balcony or terrace of your bedroom. The waiter lays the table so that it feels like a proper occasion and the sea glistens electric blue in the morning sunshine. Choose from a wide selection of fresh fruit, pastries, juices and tempting cooked options, including crispy french toast drenched in maple syrup with a side of vanilla cream.

Whilst Belmond Villa Sant’Andrea does technically have a private beach in the sense that there’s a specific area of sun beds managed by the hotel, it’s worth noting that the other hotels have a similar set-up so in peak seasons it’s likely to get quite crowded. That said, the swimming is unparalleled with crystal clear water and gentle waves. There’s also a rock about hundred metres out from shore, with inbuilt steps which you can clamber up for a stunning view of the hotel before leaping back into sea.

Beach attendants provide complimentary chilled water and cans of hydrating mist spray. The sun beds and towels could do with new, plusher replacements, but otherwise, it makes for a very blissful spot to while away a day.

Tucked within the hotel’s ocean-facing garden, the spa offers a range of soothing treatments that make the most of the island’s aromatic natural ingredients such as the sweet almond body ritual which begins with a gentle exfoliation followed by a massage using warm almond body butter. There’s a sauna, Turkish bath and a small gym, but guests can also access the larger spa facilities at Grand Hotel Timeo.

The looming presence of Mount Etna, Europe’s largest volcano (more than 3327 metres high) and one of the world’s most active, presides over eastern Sicily, occasionally spouting steam and deep rumblings. The extraordinary lunar-like landscape provides rich mineral soil for local vineyards and there are a range of hiking trails which can be explored alone, but a guide is recommended. The hotel offers luxurious tailor-made tours which include hiking up the trails to the highest point where you can see flowing lava, with a stop along the way for lunch and wine-tasting.

Ask any Sicilian and they’ll list Taormina amongst the island’s most beautiful towns and despite the influx of tourists in recent years, it still retains its charm. Amongst the many shops and restaurants that line the cobbled streets, it’s home to a magnificent ancient Greek Theatre built in the third century BC where alfresco concerts are regularly held in the summer evenings. Wonderful literary tours in a traditional three-wheeler Piaggio Ape (similar to a tuk-tuk) can also be organised through the hotel. 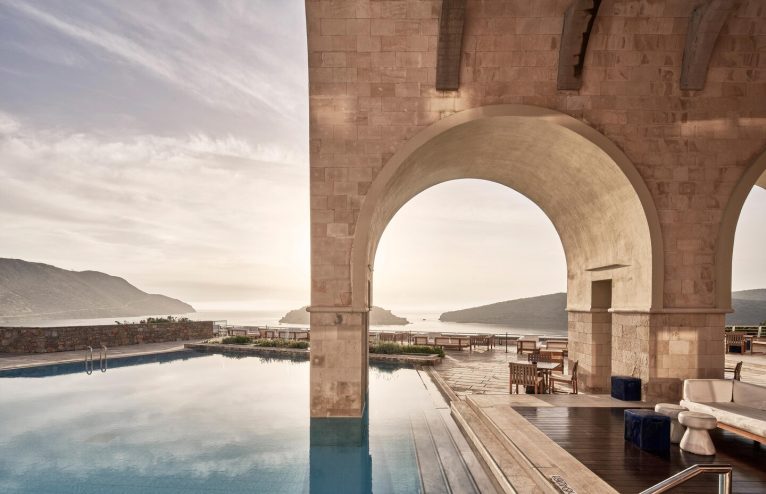