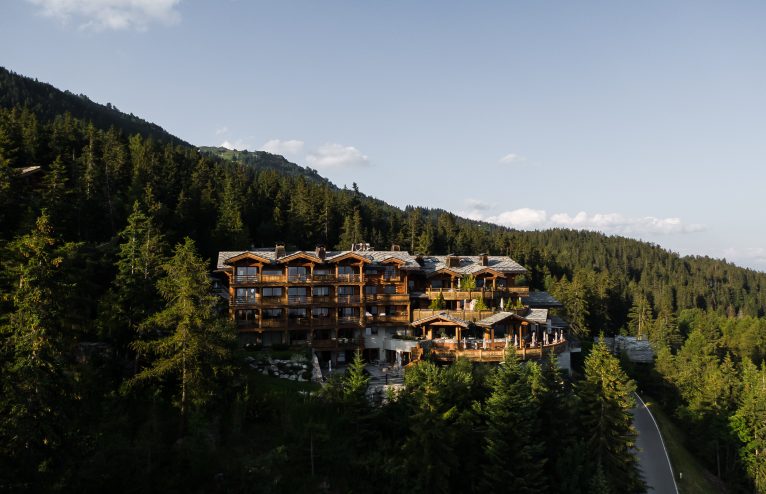 A Pocket Guide To Crans-Montana, Switzerland

With springtime skiing now on the cards, Crans-Montana’s location on a sunny plateau, perched above the Rhone valley, means it’s a hot ticket for a late-season escape. With views of the Plaine Morte glacier, the Matterhorn, and Mont Blanc, while other Swiss resorts might eclipse it in the glamour stakes, Crans-Montana’s 140km of slopes and 25 lifts – taking you up to 3,000m – deliver some of the best skiing in the Swiss Alps.

Home to the annual amateur City Ski Championships, as well as this year’s Audi FIS Ski World Cup women’s downhill race, and The Nines – an incredible global action sports competition held this April – , this is a resort that combines some serious south-facing slope action with luxury R&R and indulgent Alpine gastronomy from some of Switzerland’s most renowned chefs. Reached either by car or via a scenic rail journey that carries you from the city to the mountains along the shores of Lake Geneva, this is one resort that promises an unforgettable weekend.

If it’s an Alpine haven you’re seeking, Le Crans is it. Hovering above the main resort village on the edge of a peaceful forest, this is the kind of tranquility rarely seen in the Alps. Exquisite rooms feature antique pine panelling, invitingly cosy textures, and balconies and terraces with unrivalled sunset views across the mountains. Completely overhauled back in 2005, its design and décor truly makes the most of Switzerland’s nature and landscape. Its dining is amongst the best in town while 70% of its wine cellar hails from Switzerland, proudly championing winemakers from the Valais, including many small producers revolutionising the industry and a wealth of rare and vintage finds.

There is no better spot in town for unwinding after a day on the slopes, than their spa with both a panoramic heated outdoor and indoor pool, as well as a hammam, jacuzzi, and sauna. In fact, with a spa this indulgent, you’d be forgiven for skipping the skiing altogether.

Part of Relais & Châteaux, the postcard-perfect Swiss chalet of Hotel du Pas de l’Ours is all natural stone walls, wooden beams, and open fireplaces. Classic Rooms – totally panelled in wood – are the perfect option for those spending their time out and about, but upgrade to a suite and you’ll be blessed with a fireplace and hot tub, mountain view terrace, and indulgent amounts of space.

The regenerative space of L’Alpage Spa is a must after a long day outdoors, with an indoor/outdoor pool and a host of treatments including a Himalayan Salt Stone Massage and a detoxifying Tuscan thermal mud treatment. Gastronomy is courtesy of Michelin-starred Frank Reynaud and definitely not to be missed. 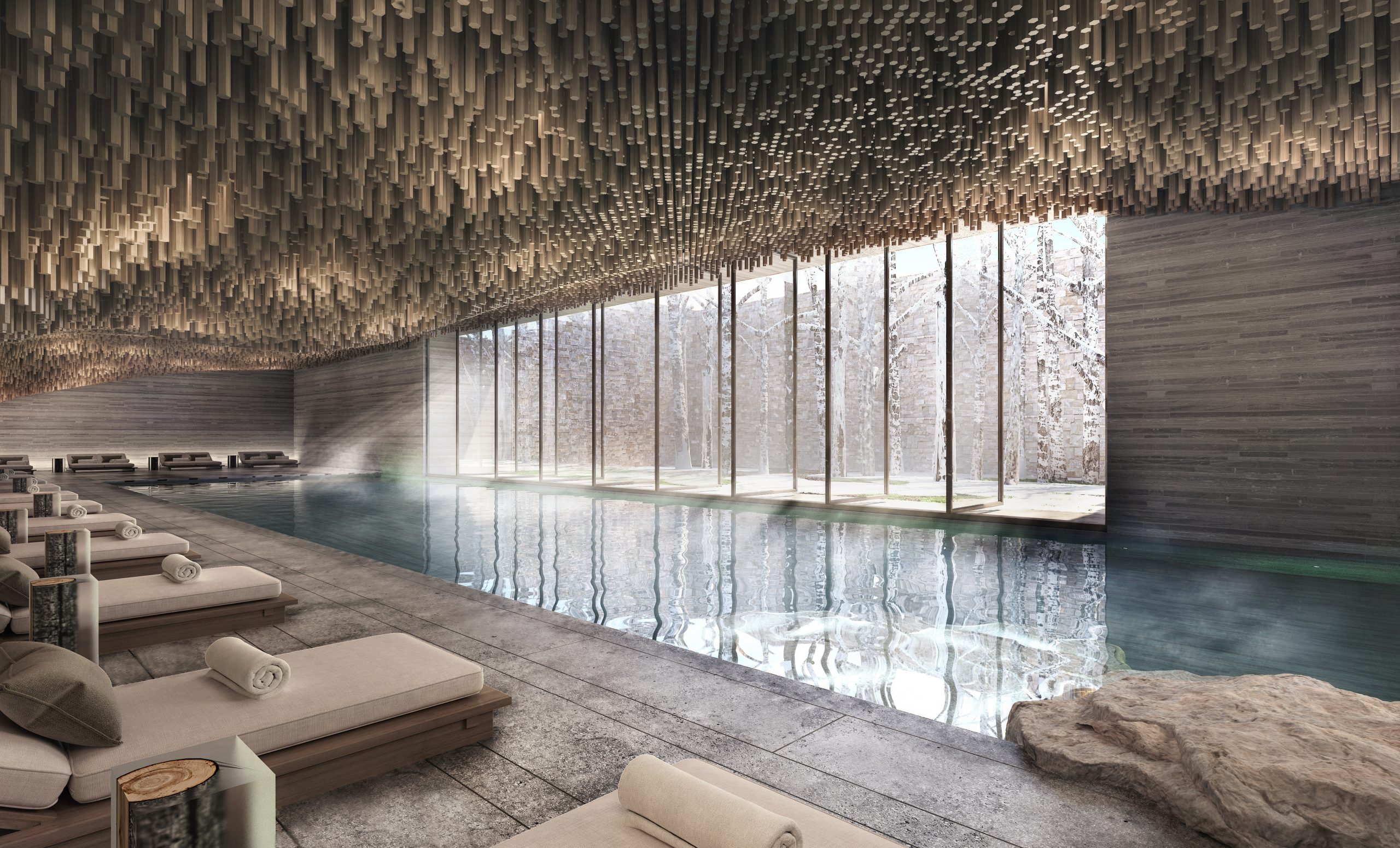 Currently in development ahead of a Q4 opening, this place is one to have on your radar when looking ahead to next season’s plannings. Built to blend in harmoniously with its surroundings at the bottom of the Cry d’Er gondola in Crans village, the resort will feature 47 guest rooms and suites alongside Six Senses residential units. It marks one of the last construction projects able to offer residences for sale to foreigners, and with many of the units – which include three and four-bedroom accommodations – already snapped up, it’s proving a popular investment.

Developed in line with Six Senses sustainability focuses, the build has focused on using recycled, local materials as well as conserving energy and water, and utilising renewable energy sources throughout the resort. Six Senses Crans-Montana will feature two restaurants, a bar, and terrace with majestic views across one of the most striking areas of the Swiss Alps. The spa will focus on uniquely adapted Alpine therapies and treatments as well as featuring a dedicated area for kids and teens treatments, while a gym, swimming pool, and relaxation area will also be open to both hotel guests and residents. With a menu of unique off-site experiences planned for guests, from sports to local cultural events and excursions, this is one resort you want on your radar. 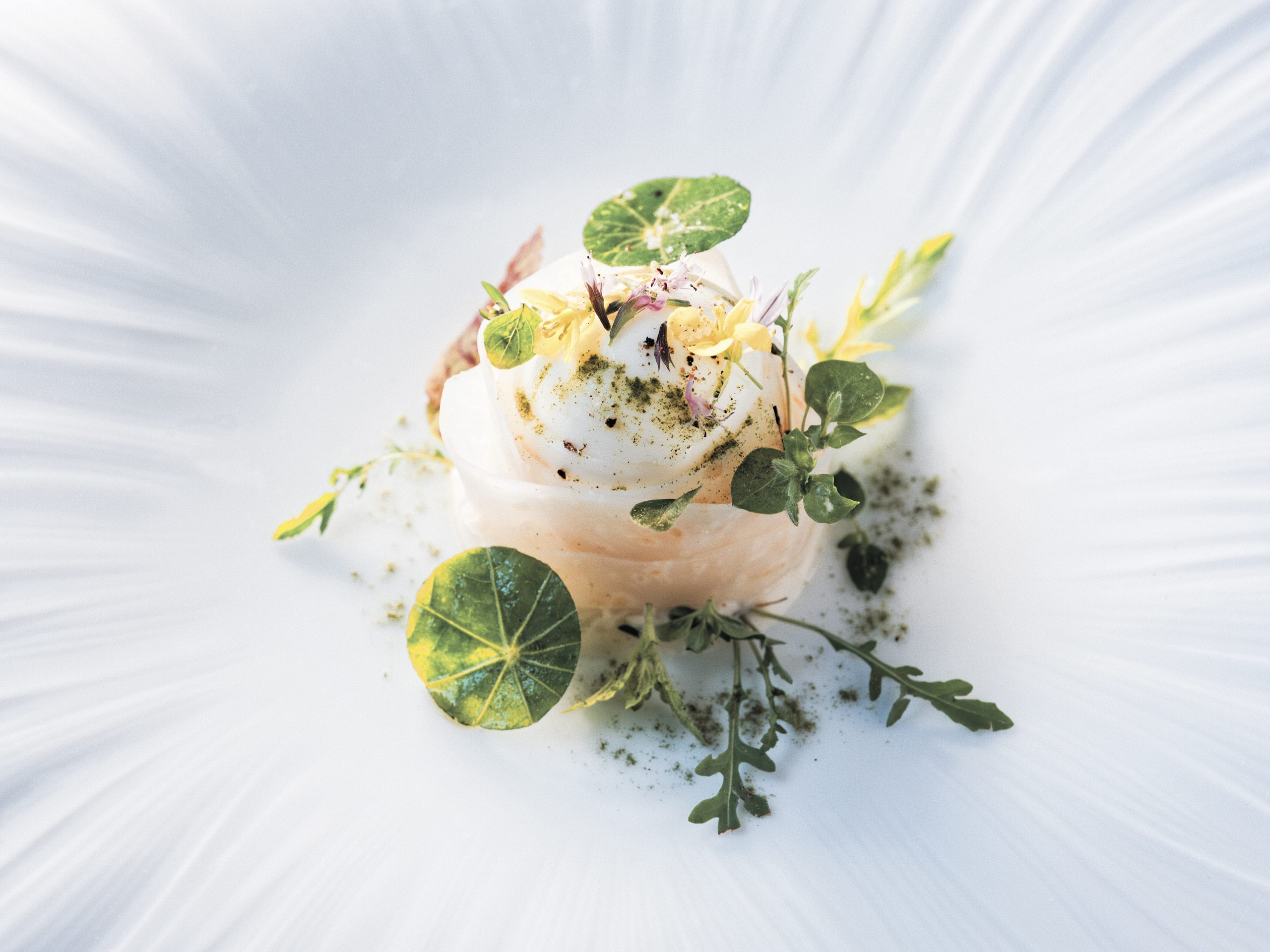 Chef Franck Reynaud draws inspiration for his exceptional tasting menus from nature, delving into Alpine cuisine and local flavours for his fine dining in the mountains, served up with breathtaking views of the peaks. Having inherited the keys to the establishment from his father-in-law in 1994, he’s gone on to transform the hotel’s gastronomy, earning the restaurant a Michelin Star in 2021. 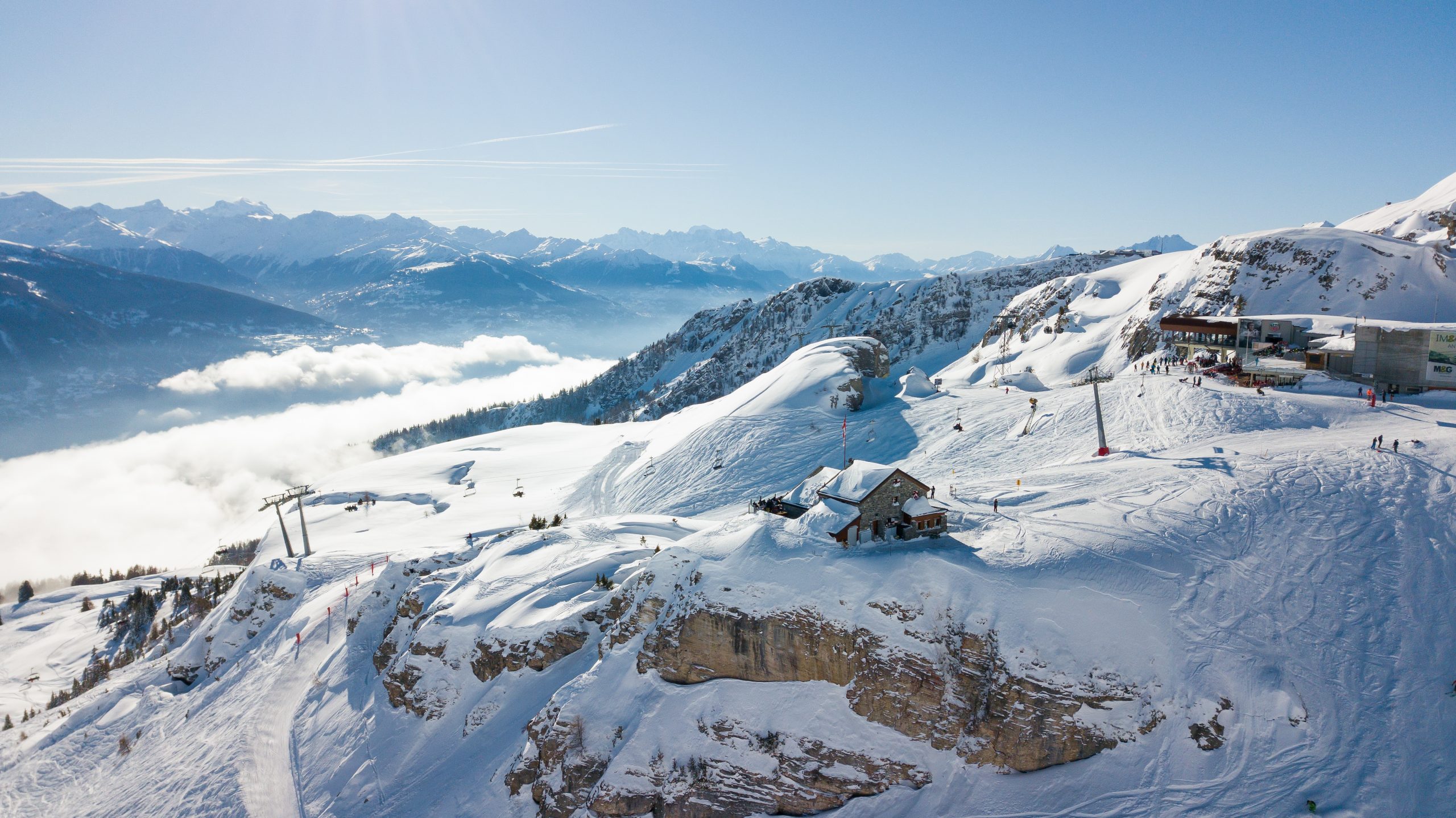 Head here after a morning on the slopes for classic Valais mountain cuisine (including an impeccable fondue) and an outdoor terrace simply crying out to be embraced with a sun-soaked beer, right in the midst of the action. For an unrivalled thrill, book into one of their handful of rooms to enjoy a 2,000m sunrise and be the first down the piste post-dawn.

Down in the village on the shores of Lake Moubra, this cosy space serves up an inventive menu with traditional touches. From a unique take on raclette and a beef tartare with Jerusalem artichoke hazelnut butter and fruit rye bread, to a venison fillet served with spätzle and their brown butter grilled cauliflower steak, the seasonally changing menu maximises on local game in the winter and freshly caught fish throughout the summer months. 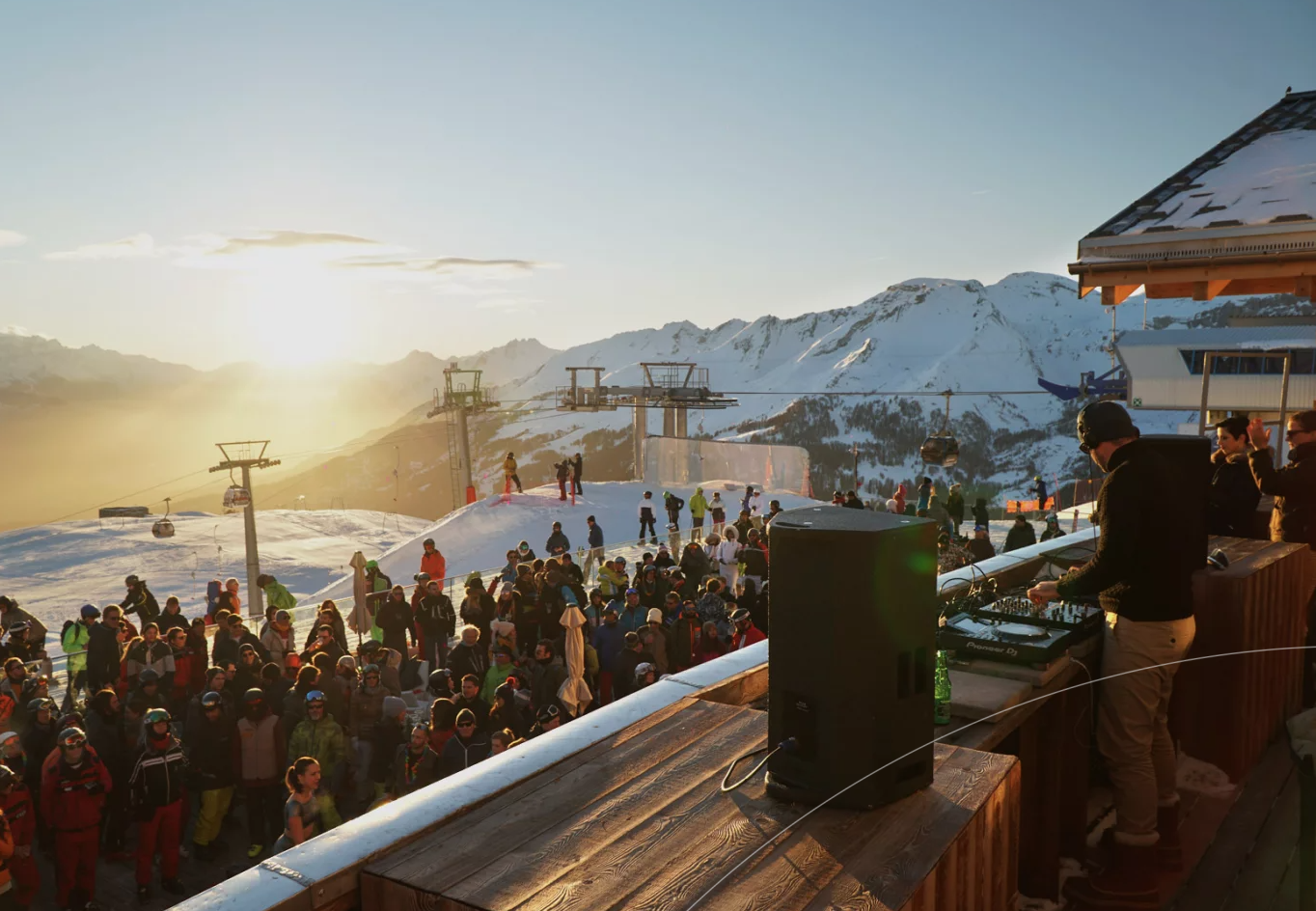 The first high-altitude restaurant in Crans-Montana, built in 1944 and touching the clouds at 2,200m, the Cry d’Er site may have gone through a few incarnations over the years but it’s always been one of the hottest locations around the resort. Since 2016 the Cry d’Er Club Altitude has offered skiers a meeting of bistronomic cuisine with a fantastic programme of live music, DJs, and club nights; it’s the only destination for mountain-top après.

Ideally located at the bottom of the slopes in Crans village and ergo the location of choice for post-ski/pre-dinner, Le Zérodix’s buzzing terrace and balcony catch the sunset like nowhere else in town. Park up your skis, order in the rosé and embrace the slightly uncomfortable yet oddly liberating feeling of dancing in ski boots and salopettes as the sun goes down.

Settle in for some ski touring

Crans-Montana’s 15 ski touring routes, varying from blue to black, are suitable for both beginners and seasoned pros. Over 40km of marked and secure paths include a route known as “L’Xtrême”, with a height gain of 3,000m and four uphills. Created in collaboration with ski-mountaineering champion Séverine Pont-Combe it’s not for the faint-hearted, but will undoubtedly reward you with astonishing views over the valley you won’t find on a chair lift.

Brush up your freestyle

For thrill seekers wishing to push their skills, Crans-Montana’s vast 100,000m² snow park is an unrivalled location. With a boardercross, jumps, and boxes for beginners, the more experienced will revel in the big airs, jibs, and the famous Olympic-sized halfpipe in the main park, complete with its own ski lift.

Take to the slopes under starlight

An idyllic location for a unique experience; few evenings will be as exhilarating as a torchlit descent under the stars, accompanied by music and food, heightening your senses like never before. Crans-Montana’s hotels have no shortage of spa facilities. The newly renovated Aïda Hôtel And Spa features a heated pool under a wooden vault, accented by fountains and a spectacular fireplace next to the jacuzzi. A Nordic style sauna, cryotherapy chamber, Hammam, steam room, and fitness area are accompanied by a menu of tailor-made treatments, including a volcanic stone massage and signature green tea body scrub; you’d be forgiven for not making it back to the mountains after a session in here.

Party in the forest at Caprices Festival

Something of a benchmark on the electronic music scene, April’s Caprices Festival combines a line-up of world-class DJs with utterly unique locations. The Cry d’Er terrace at 2,200m, in the midst of the Arnouva forest or in an old ski lift station at Le Signal, party through the night at what was elected the Best International Festival at the 2018 DJ Awards.