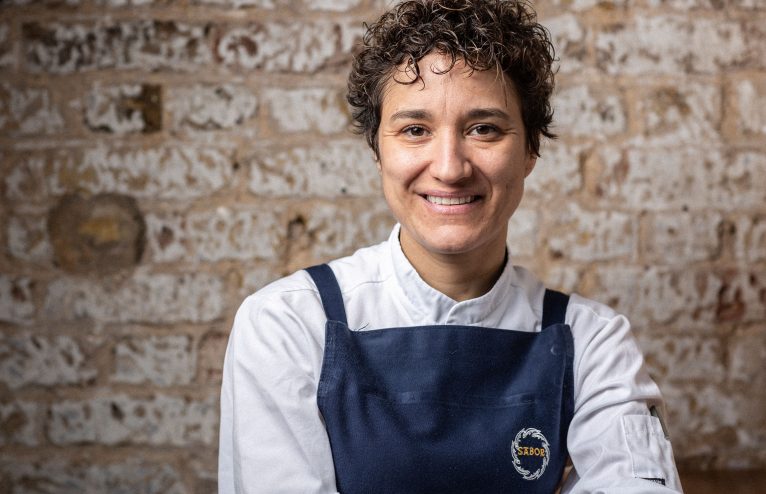 Sabor’s Nieves Barragan joins us for the latest instalment of The Chef’s Table.

Growing up in Bilbao in Spain’s Basque region, from an early age Nieves was learning about the region’s produce and cuisine. Moving to London in 1998, she began work at Simply Nico, before moving on to work at Fino in 2003. In 2007 Nieves became the group’s executive chef, ahead of the launch of the first Barrafina restaurant on London’s Frith Street. After a decade as executive chef for both Fino and Barrafina, Nieves opened her own restaurant, Sabor, on Heddon Street in London in 2018. Sabor was awarded its first Michelin star that same year.

Here, Nieves takes us on a miniature culinary journey around Spain (by way of Sabor), and shares her hit list of eateries in London.

A friend of mine called me up and said ‘why don’t you come to London for a year?’. That was in 1998, and I started working at Simply Nico first. When I started to work in a professional kitchen and I saw how disciplined you have to be, I fell in love with the magic. I was working six days a week and double shifts, but I was finding a lot of new ingredients that I had never seen before and absorbing everything. The year flew by so quickly I wasn’t ready to go back to Spain after a year.

What are some of your childhood food memories?

I always think of my mum’s rabbit stew. She makes it with onions, roast peppers (red and green), dried coriceros chillies, white wine, bay leaf, and grated tomato. You have to make sure the tomatoes are really ripe without too much acidity. It never comes out the same as hers when I make it.

Who most influenced your cooking?

There have been so many influences throughout the years. When I was a teenager my mum and I used to [love watching] Karlos Arguiñano. He is the funniest chef on TV in Spain, and [makes] the most delicious food. It was home-cooking style: things you could make in half an hour. We would cook [the meal he prepared] together the next day.

I [also] love Mexican food. Pujol in Mexico City is amazing, Enrique Olvera is a really inspiring chef; one of many.

The food that makes you happiest and why?

I love rice-based dishes in a sauce – like the seafood rice we do at Sabor. I love silky textures that can be eaten with a spoon. That’s my memory of comfort food.

The pestle and mortar. I use it all the time to make pastes and bases for stews. For example, garlic, parsley, and hazelnuts all ground together – these pastes give a depth of flavour to the stews and the rice dishes [at Sabor].

Everyone Can Bake by Dominique Ansel; Nose to Tail Eating by Fergus Henderson; Mexico from the Inside Out by Enrique Olvera; Crust by Richard Bertinet.

What’s the one ingredient you can’t live without?

Extra Virgin Arbequina Olive Oil. I use it in everything. 99.999% of what I cook uses olive oil, and this is the best quality you can get.

Where are the best places to shop for produce in London?

Definitely at Brindisa. I get all the Spanish dried ingredients from Brindisa.

How does travel influence your cooking?

Travel really has a huge influence. When I go to Mexico, or even Asia, I’m constantly trying new things and it gives me inspiration of how those ideas and ingredients can be adapted and merged into a Spanish style, with my own twist.

Travelling is my real-world cookbook and where I get my ideas from. When I eat, see, smell, it’s a sensory inspiration. That, and seeking [out] local suppliers and visiting the markets when I travel is what really inspires me.

Where are your favourite places to dine in London?

I love St. John, the one in Clerkenwell. KOL for Mexican and Kiln for Thai. More of my favourites are Gymkhana, Fallow, Oklava, and Lisboeta.

What do you always avoid ordering on a menu?

I don’t really like to use chemical thickeners such as MSG, but I’m not a fussy eater.

By contrast, must-order items on the menu at Sabor include…

The best way to start is with the pan con tomate, it’s a typical tapas dish all over Spain. The octopus is one of our really special dishes; also, the rice and monkfish tempura. The suckling pig is a speciality at Sabor; it’s cooked in a traditional wood oven and served with warm potatoes and green salad.

Why do you think it’s important to gather round the table to eat?

Eating, interacting, and feeling the excitement and joy of good food, shared with the people you love, it’s very important.

We always sit down for a staff meal at Sabor before service; it’s really important to come together and reset.

What is your go-to meal at home when you’re low on time?

Usually an omelette, with herbs and some nice bread, like a baguette – the kind you would make bocadillos with.

Do you find cooking therapeutic?

I can’t say it’s therapeutic! You have to use a lot of concentration and [have] a sharp focus. When I’m cooking at home I’m always thinking about work; it’s my time to relax and mentally organise my week ahead at Sabor!

Advice for women thinking about starting up a business in the food or restaurant industry?

Being a chef is a really beautiful career, but you have to be prepared to make a lot of sacrifices for your passions.